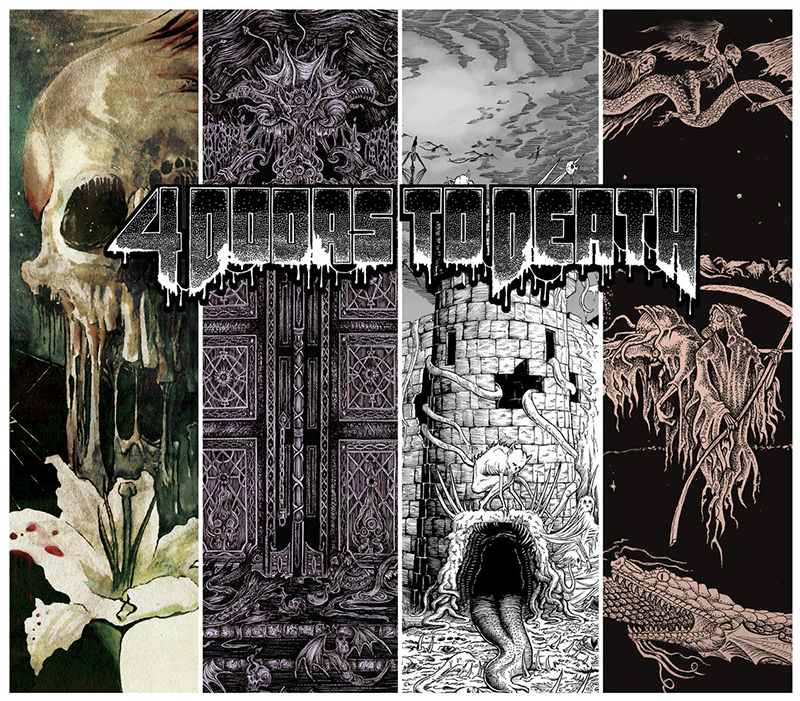 Try though I might, I simply cannot put 4 Doors to Death down. This four-way split from Unspeakable Axe collects some new tracks from some of the filthiest, most brutal new bands to fly the tattered flag of old-school death metal.

Cemetery Filth bursts through the first door with abyssal riff-maelstroms of chaos. Their style reeks of Autopsy and early Pestilence, with driving, thrashy riffs that only yield to summon forth head-banging heaviness. “Consumption of Volition” is a seriously classic track, oozing with old-school energy, while I truly can’t escape “Cosmic Wraiths” every time I spin 4 Doors to Death. I really dig Cemetery Filth’s ability to ramp up their tense atmosphere in one moment and then deliver steamrolling power and energy in the next.

Then Ectovoid opens up the Gateways to Annihilation, both of their tracks dripping with the same blood-soaked menace that spewed forth from Florida in the early ‘90s. Theirs is a slow, ominous death, a baleful nemesis that overwhelms the senses with slow-building dread. “Ash Primordial” serves as a perfect example of their style, opening with a doom-infused dirge that crests into savage, face-pummeling intensity. “Possessed by Ancient Dread” amps up the doom-death elements of their sound, but instead of just sounding slow and morose, there’s some legit trad-doom riffing throughout.

Just when I thought I might get a reprieve from the unrelenting bloodbath, Sabbatory emerges with two juicy slabs of vicious, groovy death metal. I didn’t think it was possible for them to top the savage assault of their Endless Asphyxiating Gloom, but these two tracks gleam with murderous intent, a promise of even greater things to come. “Ascension To My Holy Tomb” got right up into my face with its fierce, galloping rhythms and dissonant leads. Then the glorious carnage of “Primordial” surged forth, leaving me beaten and bloody in its violent wake.

Finally, Trenchrot arise from the wreckage like the very specter of Death. All three of their tracks loom over the twisted wreckage of battle, screaming like the unrelenting rain of artillery fire. “Hell Pilot’s Call” finds these Philadelphians at their absolute doomiest, making their inevitable explosion of intensity and hellfire all the more satisfying. However, the final track on the album—their cover of Death’s “Evil Dead”—left nothing but ruin in its wake, opening all the doors of death with a swirling vortex of ancient, necronomic majesty.

Every moment of 4 Doors to Death simply trembles with pent-up rage, but each track unleashes its malice with such razor-sharp precision that it’s hard to believe most of these bands have only been performing since around 2010. All four of these bands have a true sense of the old-school death metal sound, but it’s clear from the outset that these are no mere imitators. This is true, flesh-ripping death metal, down to the core—just the way your pappy likes it. These bands might be newcomers to the death metal game, but all four have the real potential to become household names in the genre. Each one of them boasts a unique take on the sounds of the past, and I wouldn’t be surprised to see a few patches strewn about the mosh pits in SLC pretty soon. 4 Doors to Death is nothing short of essential, and the dark powers contained within are only building in strength.