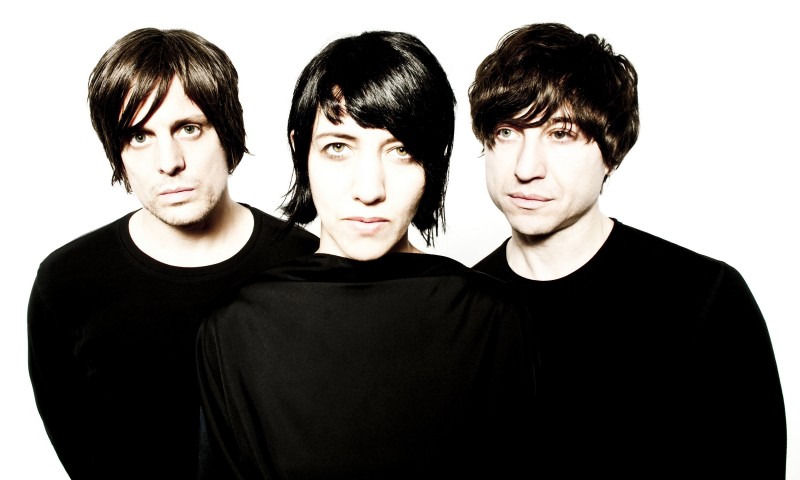 And Now For Something Completely Autolux: A Highway Robbery

Some days you just shouldn’t answer the phone, particularly when it’s your editor calling. Yet like a fool I do, just in case she’s calling to sack me or to offer some multimillion-dollar book deal.

[Autolux]”Have you heard of Autolux?”

It seems like a simple question, but nothing is ever that simple.

“We saw them at CMJ; you’re going to love them.”

This was followed by a string of adjectives (well, actually, if you want to get technical, they were nouns being used as adjectives): My Bloody Valentine, Sonic Youth, Jesus & Marychain …

Maybe I could love that.

A week and a massive headache later, somewhere in Los Angeles, a kick pedal punches one last beat, the phone rings and the heist begins.

“Is Carla Azar there?”

I’ve had a longstanding joke with the powers that be (i.e., SLUG’s editors) that there is a reason drum machines exist in huge numbers and they’ve yet to come up with a proper guitar machine. I should know better than to mess with women who play the drums, I never learn my lesson.

Did I happen to mention Carla’s a drummer? Well, it’s too late to turn back. It’s not like she can pummel me through the phone; although she could hang up.

Is there much of a scene in L.A. these days?

“I’m not aware of any scene,” says Carla. “We don’t go out a lot. You know certain bands, but we’re not out every night being scenesters. It feels like there isn’t a scene because a scene should be introducing something new.”

Are Autolux doing something new then?

“We’re striving to do something new, to cover new ground.”

You can say this all started because of Nobel Prize-winning Dario Fo, whose comedic play The Accidental Death of an Anarchist brought Clara and Eugene Goreshter, a guitarist/violinist (Maids of Gravity), together to score and perform the music to accompany the play.

“We were writing sounds and pieces, not rock. We didn’t have to think about writing a chorus.”

Then Greg Edwards (Failure) turned up on her doorstep.

“I had met him while touring with another band. I thought he was brilliant. He was literally the only other person I was interested in working with.”

So Carla, Eugene and Greg spent their weeks jamming through the later hours and into the early morning.

“I laugh when I hear about people having a hard time getting their drummer to show up twice a week. We’d wake up every day, call each other and go jam at the rehearsal space.”

These sessions were highly experimental. They’d play for hours tweaking grooves, sound effects, searching for something that didn’t quite sound like anything they had heard before; new combinations of styles, different beats. In the adventures, Eugene and Greg swapped instruments to shake things up.

“It was magical, something different,” she says.

So they stuck with it.

She continues, “We wanted to come up with interesting sounds; but we also loved songs.”

So the pop element started to work its way into the band’s sound.

“We just wanted to stay clear of what was familiar; which was hard because so much has already been done with music,” she says.

They invited their friend T Bone Burnett, best known for his production work on the bluegrass-tinged scores for Cold Mountain and O Brother, Where Art Thou, to catch one of their performances just to see what he thought.

“TB is more unique than what most people think. He’s produced more than just bluegrass. … His wide taste in music is impeccable,” she says. “When we invited him out to see us, we didn’t know if he’d like it. We were shocked when he did.”

In fact, he liked it so much he told the band that he and his pals the Coen Brothers were looking into starting a record label and he wanted them on it.

But what is a rock n’ roll story without a bit of pain and suffering to go along with the flashes of success?

In the midst of their wild climb to the top of “the best-kept secret” list, Clara took a dive off the stage following three adventurous nights opening for Elvis Costello and destroyed her elbow.

“The first doctor said I’d never have full use of my arm again; so I knew he was the wrong doctor.”

The second, a Japanese doctor, wasn’t sure if she’d be able to play drums again. 6 months and 8 titanium screws later, she started to build up the muscles again.

“I had to play again. I kept telling myself: ‘I can’t not play drums!'”

During the healing process, Carla found herself doing a bit of acting as well.

“We’d go to meet with record labels … I didn’t have a cast; just had my arm in a sling. I acted like it was fine, just a little sore. If they had looked at it, they’d have known I was lying.”

In time, Carla regained full use of her elbow and the band picked up where they’d left off after a 10-month hiatus.

Their next challenge would come in their first “proper” recording sessions. T Bone wanted to capture the live sound of the band; insisted they didn’t need a producer, but he’d stick around and give them some help.

The basic tracks were recorded in two periods that were placed on either side of the December holidays. T Bone had to go off and work on another project; it wasn’t until the end of February that the album was finally completely mixed.

“The band has always been very hands-on and luckily, we’ve always been on the same page,” says Carla. “Up to that point, we had done everything ourselves. It was difficult to bring other people into the project. We’d mix, wait and then not be happy with the mix.”

The process included some, true to their roots, unorthodox over-dubbing.

“We’d take a CD of the mix and play on top of it in the rehearsal space and take what we’d recorded back into the studio to mix.”

Which of course brings us to the burning question: What exactly do Autolux sound like?

“I don’t know what we sound like,” says Carla. “It’s hard to be in the band and try to explain what you sound like. Well, unless you’re trying to copy someone’s sound, and then it’s very easy.”

I guess we go back to using nouns as adjectives: Take a slice of the Velvet Underground, add some My Bloody Valentine and then throw all of that out and start over with some Sonic Youth meets Slowdive, next track start over again and drop in something from Can or … well, maybe you get the point. You can’t call them shoegazers; you can’t classify them simply as indie; they aren’t exactly lo-fi, either. Perhaps it’s for the best; they did set out to do something new. Unlike so many others, they might have actually done it.

“We’re never going to be a band who says ‘this is our sound,'” says Carla.

So, have you met the Coen Brothers?

“They came to one of our shows to see what T-Bone was getting them into,” says Carla.

Something good, if you ask me.