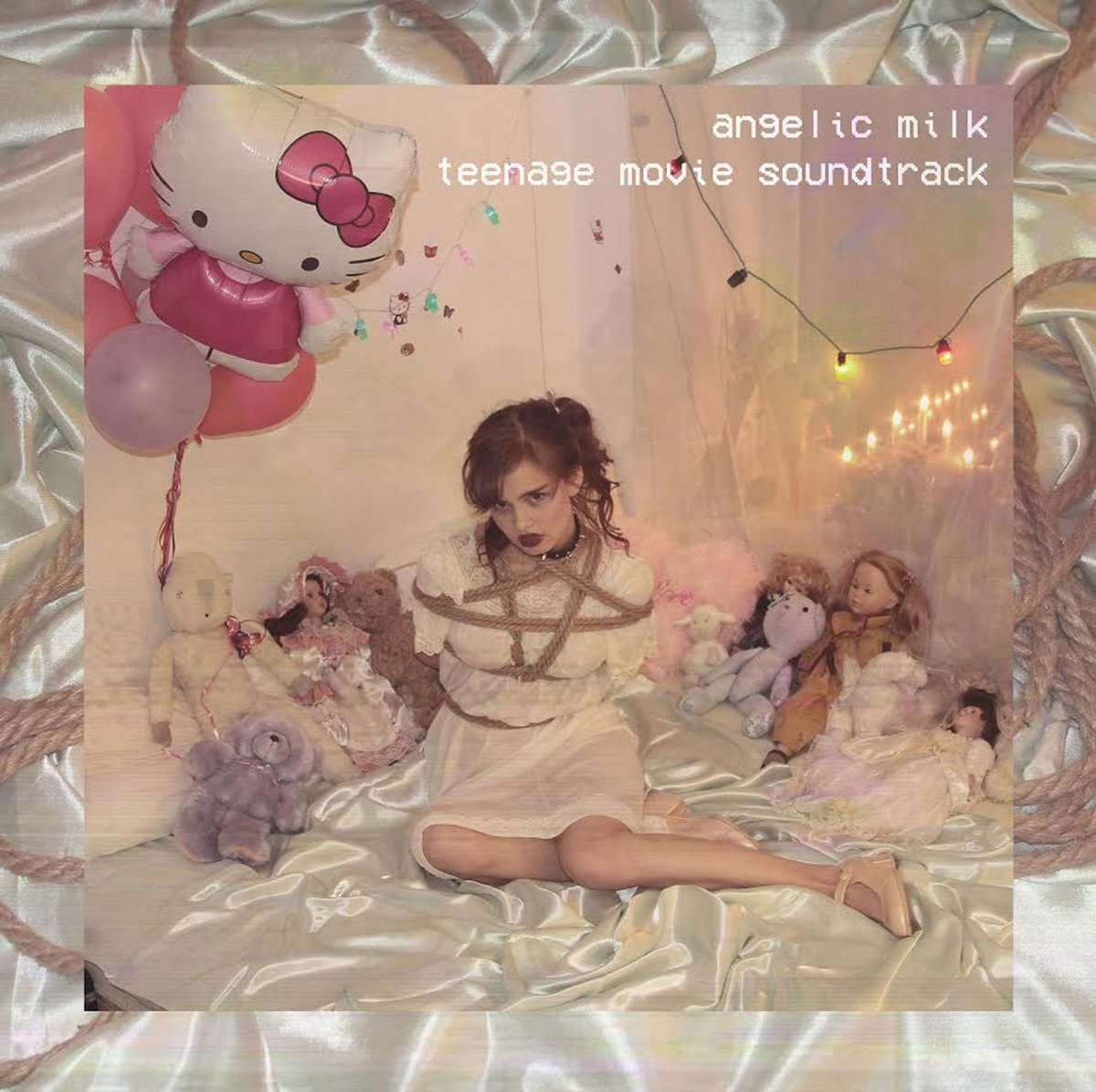 With an album cover right out of the dark recesses of my past years of Tumblr teendom (think pink, satin and Hello Kitty, and tie it all together with a virginal-white-wearing teen in pentagram-shaped bondage), angelic milk sound a lot like this cover looks like, and bonus—their name really matches, too. Following in the vein of any Bleached song, but with the added snark of Sarah Persephona’s sticky-sweet vocals, St. Petersburg–based angelic milk are an energetic pop punk piece serving up real attitude in their new EP, Teenage Movie Soundtrack. Part of this attitude might come from founder Persephona’s youth, as she’s only in her late teens. Part of it may come from the fact that she’s one hardworking cog in the small-but-blossoming indie scene in Russia.

The energetic collection of four songs starts with “Tie Me Up.” It whirrs to a start, sounding like a fast carousel, followed by a fast track of surfy beats accompanying Persephona’s repeated demand of “tie me up.” The song, of course, makes sense as the opener, seeing as it matches the cutesy-bondage cover. While it’s not my favorite song on the album, it’s definitely intended to be the star with its sugary, anthemic energy. My favorite comes second, titled “Ripped Jeans.” Persephona’s voice is at its whiniest coo in this song, and I’m obsessed with it. There’s no doubt that she’s flirting with a Lolita aesthetic—in every song, for that matter, and in her band’s style—with her unabashed penchant for singing in her girlish, babyish voice. I’m usually pretty over that cliché, but if she pumps out a few more unique tracks like “Ripped Jeans,” I’d definitely be more on board. It is the shortest song on the EP. The entire thing shakes out in a quick-paced 2:28 with stormy guitar and rumbly bass, which just serves as the wave her darkly alluring voice rides over. I loved the song so much I was delighted to find a slower version of it on their last album, Pale, which deals more on the sedated, lo-fi side of things (and does very well at it).

“Rebel Black” follows, which definitely hangs out with the same “romantic young thing” vibes like those found in Best Coast’s and Bleached’s music, with lyrics like “Gonna make my living off / Crying and singing songs / Leaning out the window to cry / Love is not a crime” and the simple  “I’m dyin’ here / Let’s get outta here.” However, there’s something about a Russian band in a fresh-faced scene rocking these themes of youthful angst and romance that feels more hard-won and authentic to me than when I typically pick up on those themes elsewhere.

So, both contextually speaking and stylistically speaking, these are rad songs, all wrapped up with “Some Boys Are Beautiful Girls.” By far the poppiest track on the EP, it’s a sparkling, saccharine guitar-driven song whose main refrain is, yep;  “Some boys are beautiful girls.”

The best part of the song is around the pulsating, pounding 2:50 mark where Persephona releases a whine that throws the song into its last burst of energy.

All in all, this EP speaks a great deal of promise for this cool Russian group, so here’s to hoping they’ll keep it up! –Erin Moore