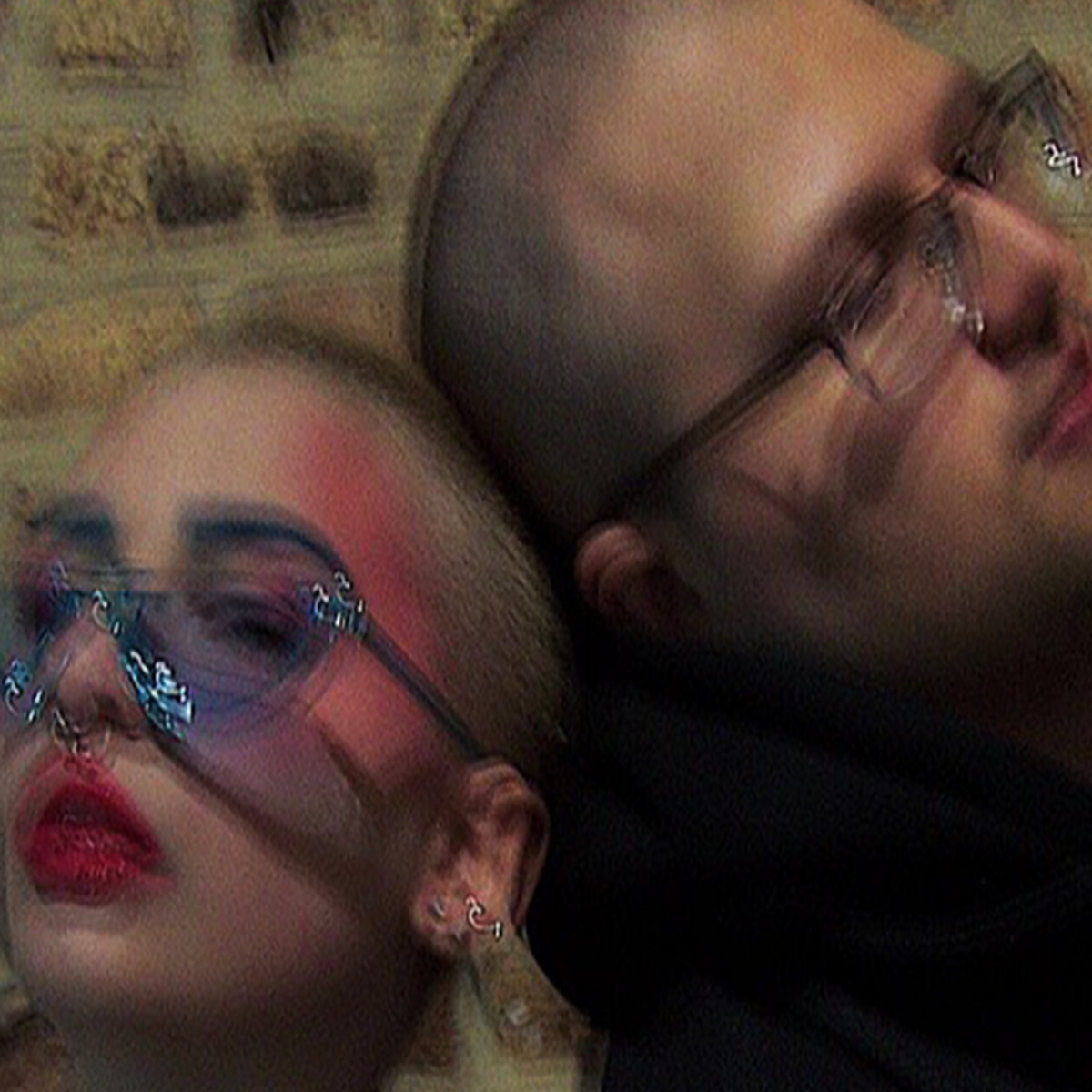 The current world record for longest time spent holding one’s breath is held by Aleix Segura Vendrell at 24 minutes and 3 seconds, roughly two-and-a-half times the length of Asbestos Lead Asbestos’ new EP, Empty Message. The Chicago-based duo of cassidy and joey seem intent on testing their listeners’ aptitude in this arena: From the opening recitation of interplanetary geological factoids to the gargled, Bela Lugosi–esque threats and cackles from “the Lizard” that send off the release, there’s rarely—if ever—room for air. The four seamless tracks blaze by in less than 10 minutes, a jerking roller coaster of corroded electronic collages with the visage of a mangled, hollow husk from a blood-boiling rave.

Asbestos’ 2019 full-length, Nature of the Feline, contained smatterings of this approach, though interlaced within cheeky, avant-folk “songs.” Empty Message contains no such concessions toward tunefulness, instead focusing its efforts on canning pure chaos. Once the beat rises from the ashes of the smoldered textbook readings that open “Subduction,” Asbestos outline their brand of war-ready dance punk. Atop a distorted gallop, cassidy dives onto the mix in a full fever pitch: “I / Said / Stop / Let me be on top.” A series of jabs and boasts follow, before they finally pile down that they’re “more than a man than you ever could be.” Each pulse of the overblown kick drum propels the fervor of these bloodthirsty quasi-raps; each fragment of frazzled delay trickling off of cassidy’s voice a ghoulish conspirator emphasizing their proclamations and put-downs.

Where “Subduction” barrels down with lung-bursting agitation, “La Petite Mort” instills a chill that forces the breath inside you, the oxygen drying up with each tense second. Atop a churning bass thrum, a choir of cassidys intone a unison, monosyllabic chant, the closest the Asbestos heathens can get to religious ecstasy. The final minute melts away into an atmospheric setting of a precious synthesizer melody. It’s a moment that approaches bliss, where Asbestos provide their ceremony with a closing hymn that lullabies you in its patient, melodic breeze. This segment feels alien, out-of-place; a rogue strand of sentimentality that wormed its way into Abestos’ grinning agnosticism.

Asbestos run from this , and this glimpse of delicacy is promptly shredded by the pillars of sulking guitar chugs that announce “Best Coke in Town.” Something of a hellish, chant-along cousin to a dad-rock drinking anthem, the track lumbers along with a call-and-response vocal chant. The pair of voices seems as if they’re about to topple over with each intonation, and “Best Coke” quickly gives in to the fatigue. The latter two-thirds of the track combusts into a swirl of sonic maximalism, a mélange of detuned guitar arpeggios and industrial wails. Though this stretch forgoes the percussive attacks of the track’s opening segment, it’s no less domineering in its construction of a steel wall of sound.

Closer “Don’t Get Eaten By the Lizard” floats along an indecisive, start-stop structure: The ultra-compressed drum slaps gain momentum for a few measures before petering out, repeating this process in cycles, like a car turning over its engine before shuttering in defeat. Even if the festivities are labored through shallow pants, the track is a raucous celebration. Helmed by cassidy’s melismatic croons and yelps, all dredged in autotune and deep-fried in distortion, “Don’t Get Eaten” provides the final shock of absurdity and wit before the Lizard caps the EP into silence. The albums rat’s nest of loose ends remains scattered and knotted, leaving the listener racking their brain for a shred of meaning before looping back around for a second lap.

Empty Message is shorter than an episode of SpongeBob, but it’s liable to induce whiplash and leave behind a bit of a hangover. In brevity, Asbestos Led Asbestos have found room for an expanse; a torrential whirlwind of TV static and Froot Loops vomit. Breathe out. –Audrey Lockie