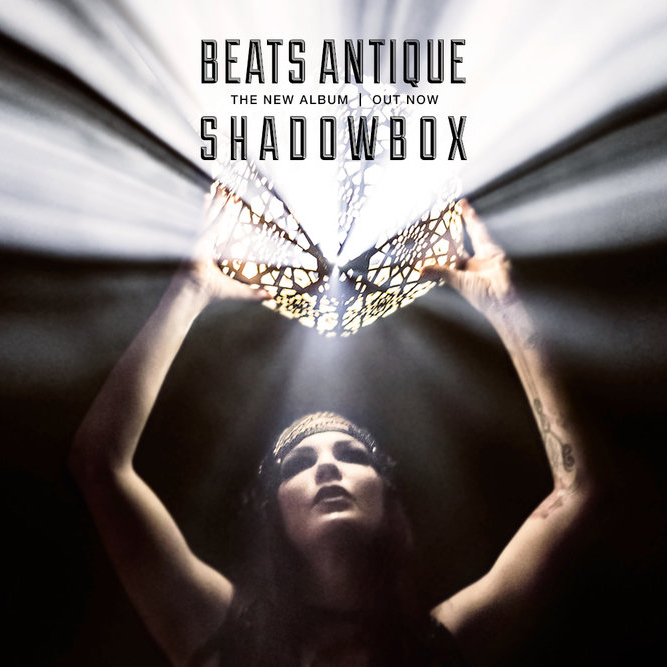 If you’ve listened to Beats Antique before, you’ll know how diverse and unique their music is, and how difficult it is to pin down exactly what “genre” they belong in. They’re a group that’s heavy with electronic and percussion but deeply inspired by and infused with Tribal Fusion dance. The group—comprising David Satori, Tommy “Sidecar” Cappel and Zoe Jakes—is releasing their tenth album this year to celebrate their 10 years as a band/performance group. As a longtime Beats Antique fan, I will say I was looking forward to listening to this album—and strongly hoped it wouldn’t let me down.

“Killer Bee,” featuring Lafa Taylor, is a fun combination of hip-hop and tribal fusion music that strongly reminded me of Balkan Beat Box’s gypsy-punk sound. “Let It All Go” has more jazz influences than I was expecting to hear on a Beats Antique album. “Burn Dub” took on too much dubstep for my taste, while “The Block” had an annoying overload of trumpets that overwhelmed every other aspect of the song. The majority of the songs on Shadowbox were similar to this: out of context for Beats Antique and incorporating unexpected feature artists.

“Vesper Star,” featuring Alam Khan, definitely brought me back to old-school Beats Antique with electronic belly dance sounds, and was one of my favorite tracks on the entire album. “Semblance” is a close second-favorite, with more strings and percussion play than most of the other tracks. “Le Refuge” was the song I’d been hoping for: dark vocals, heavy strings and a sensual dance beat. These tracks just might be the saving grace for the entire album and, in my honest opinion, better encompass the feel and sound of Beats Antique than do the other tracks.

Although Shadowbox has a couple of good tracks and is an album that caters to a larger audience, I think it’s one of Beats’ weaker albums. It’s as if the group decided to try out a whole slew of genres they hadn’t before—and the experiment didn’t go as planned. “Sideswipe” tried its best to incorporate electric guitar and rock vibes to an epic-sounding, trumpet-overpowered song—but the combination’s fail was about as epic as the song gets. I can’t say that the album took me on a journey as much as I can say it felt like being given a Music 101 lecture by a professor with bad coffee breath and a two-day-old stained shirt—but it’s still a music class, so it can’t all be terrible?

My love and appreciation for Beats Antique has not diminished. I just hope that their next album is more inspiring and thoughtful than this. This won’t stop me from listening to older albums on repeat or attending any of the group’s incredible live performances. If you’re someone who’s into unique-sounding music that takes you through a trip of multiple genres every three minutes, this just might be the album for you. —Alex Vermillion