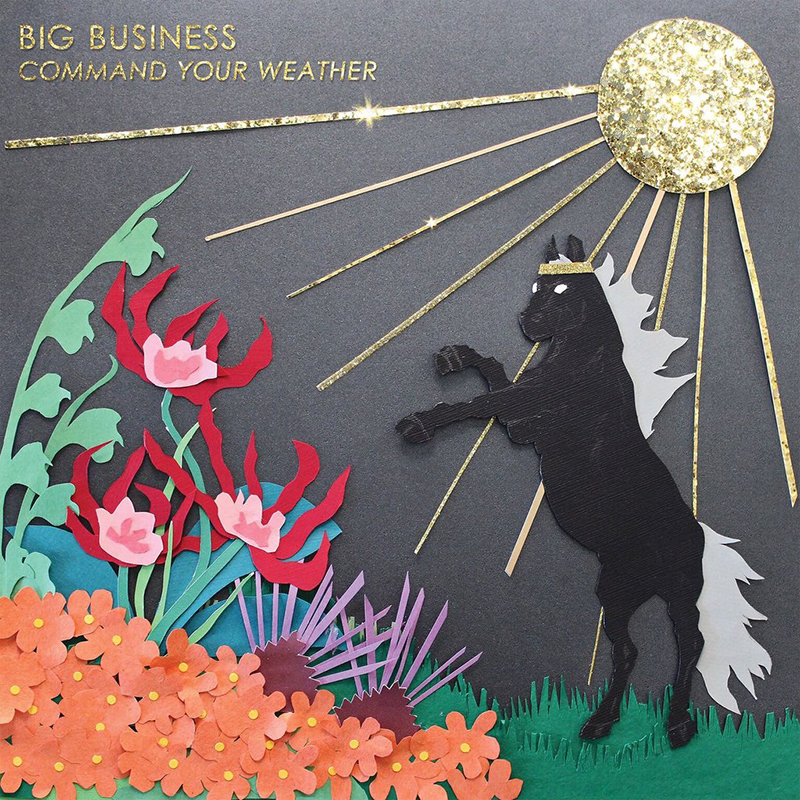 Big Business are bringing some new heat on their fifth studio album, Command Your Weather. It seems counterintuitive, since they returned to being a two-piece, but they branched out more on this release. You would assume that only having a bass and drums would be restrictive, but clearly, Jared Warren and Coady Willis don’t really care about assumptions. Big Business flirted with having a guitarist in the mix on their past two albums, 2013’s release Battlefields Forever and 2009’s Mind the Drift. Both are good and took their sound in new directions, but it’s the return to the duo that has signaled a more decisive shift in exploration.

Perhaps only having two opinions yields consensus quickly on wanting to try new things. It’s much easier to take a band vote when you represent 50 percent of the voting block—you’re either doing things, or you’re not. For Big Business, those elected additions are most represented with chimes and other bell-like instruments that twinkle throughout the record. On tracks like “Blacker Holes,” “Send Help” and “Horses,” the introduction of those chimes, xylophones and bottles brings an eerie, melancholic atmosphere to a band known more for being the audio equivalent of a pair of heavily worn, grease-stained 501s: aka rocked hard. Big Business created something new with Command Your Weather that was hinted at in prior albums but never fully realized. These tracks are the real standout pieces of the album, which, at a few points, I found other tracks would muddle together.

The aforementioned “Send Help” is the strongest song on the record. It plops itself about two-thirds of the way through the album and clearly announces itself with its lack of the heavy riffing, which immediately precedes this change. It features harmonized vocals, those bottle-like sounds and a whacked-out synth, or perhaps an effects-laden bass, which carries the warbled merry-go-round melody. For a band whose members are known as much for being Big Business as part of the Melvins, it’s cool to hear them do something outside expectations for either of those entities. The main chorus implores, “You don’t have to get bigger / But you have to get out of this space.” That chorus, in conjunction with the disorienting melody, made this song quickly hit repeat status for me.

“Horses” begins in much the same way as “Send Help,” with disorienting, carnival synth-bass magic accented by xylophones that carry the tune until it gives way to the bass and drums. Those eventually relinquish their riffs to xylophones only, with the haunting melody “Tonight they’ll truly suffer” sung over the top. It’s a memorable close to an album already punctuated by memorable moments.

Command Your Weather was recorded in Joshua Tree, California, so perhaps the desert soul searching that fueled the likes of Kyuss and others served as an inspiration for some of this new experimentation. Whatever it is, it’s working. The rest of the album twists and turns in Big Business fashion, with cool riffs perfect for cracking open a beer strewn throughout. But to these ears, it’s the experimentation and craft of the standout tracks that really make the album.

It’s interesting to me that the first two songs Big Business released to the blogosphere prior to the release of Command Your Weather are the least memorable on the album. Both “Father’s Day” and “Regulars” are fine songs, but I find so much more to digest in the rest of the album. Perhaps they wanted to release what was expected. That’s the thing, though—it’s what’s not expected that really shines on Command Your Weather. –Peter Fryer