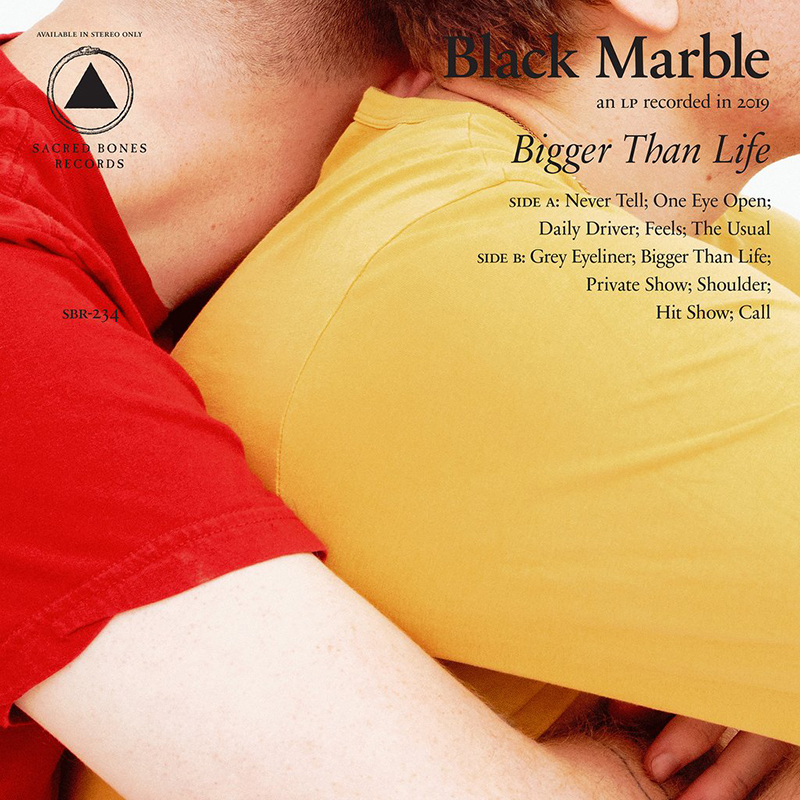 The soundscape that opens up Bigger Than Life’s opening track “Never Tell” is an electronic, lo-fi, Kavinsky-esque dream. Under a stripped-down, bouncing synth line, Black Marble soloist Chris Stewart croons, “I never ever met a normal girl / Who kept bones under her bed / But if we’re being honest / That’s what all her schoolmates said.” Lyrically, there is a mysterious, airy tone to the entire album, as well as Black Marble’s entire discography. While there is something slightly morbid and (as SLUG reviewer Kristin Porter once said) Ian Curtis–y about the timbre of Stewart’s voice, the incessant, quick rhythm lightens up the tone of the track, setting the tone for the rest of the album.

In the music video teaser for first single “One Eye Open,” a girl donning a wedding veil and dirty Chuck Taylors loads up a cassette in a portable tape deck and cruises out into the palm-tree-covered streets of Los Angeles on a Lime scooter, a symbol of solitary freedom. The washed-out film of the video juxtaposed against the contemporary scooter reference mirrors Black Marble’s ’80s synth sensibilities with a contemporary and fresh indie-pop appeal. The track itself is wrought with a fast paced, repetitive rhythm clicking away under Stewart’s low, echoing vocals. The sheer momentum and mood of “One Eye Open” make this the strongest and most memorable piece on the album. For me, there is really nothing on this album that falls short of my lofty expectations for Black Marble’s third release.

With a prominent bass line holding up interwoven, simple melodies on guitar and synth, “Daily Driver” and “Feels” portray a slight throwback to the indie-pop appeal of The Postal Service combined with the gloomy undertone of Heavens and the vocal stylings of Interpol. If I had any critique for the album, I could use a little more variation and range in Stewart’s vocals—but honestly, I feel like the beauty of Bigger Than Life is in the simplicity of its melodies and the intricacies of the lyrics. Bigger Than Life establishes an ambient yet exhilarating mood and keeps up the momentum for the entirety of the album. I personally don’t mind that the songs on Bigger Than Life have, in my opinion, more of a mass appeal than those of It’s Immaterial.  For me, Bigger Than Life marks a paradigm shift for Black Marble—I could almost see songs like “One Eye Open” and “Feels” supporting a movie soundtrack, emanating an infectious, retro feel that I’ve come to expect from Black Marble. –Ali Shimkus