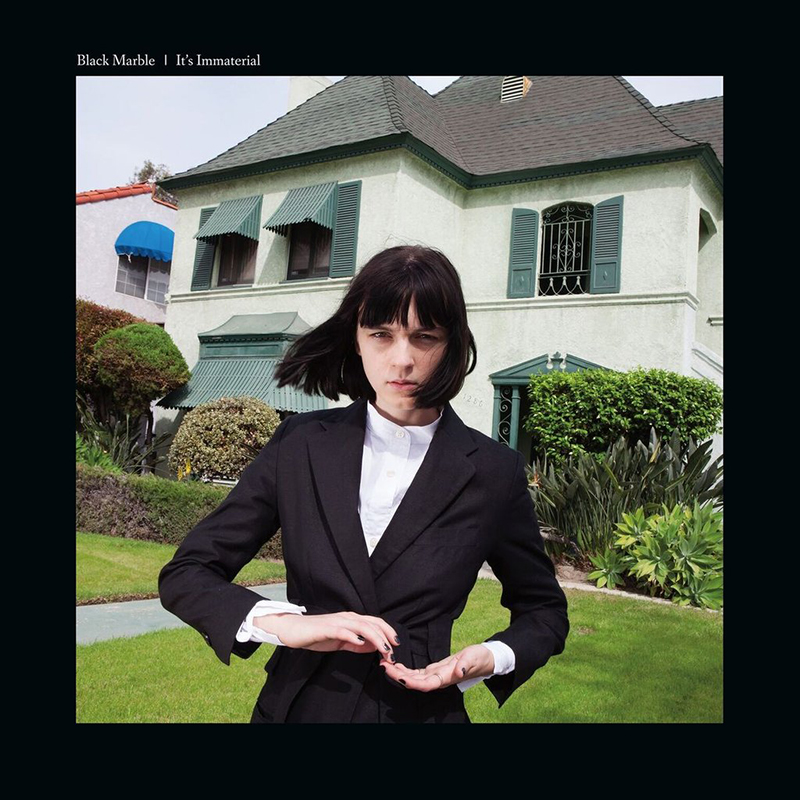 It’s Immaterial, the sophomore release from electro pop group Black Marble, retains the lo-fi grit of the band’s debut album, A Different Arrangement, while simultaneously steering the band (both physically and musically) from East Coast territory into fresher, more exploratory West Coast vibes. Singer/songwriter Chris Stewart retains his position at the helm of the project since splitting with bandmate Ty Kube amid Stewart’s move to the West Coast. Yet, despite his change in locale, Stewart keeps the band’s Brooklyn, New York–synth roots alive, resulting in a collection of songs with amplified vocals, pastel-colored synths and a hint of modern-day deference, which is evocatively scored by Stewart’s personal, nostalgic touch coupled with every happy-sad, Ian Curtis–garage dance party you’ve never been to.

The album opens with the quixotic track “Interdiction,” sampling a muffled human scream over an interjection of ephemeral sound effects and samples. Clocking in at just over a minute, the track evaporates as quickly as it appears—like the opening credits of an ’80s sci-fi film based loosely on the works of William S. Burroughs.

The second track on the album, “Iron Lung,” presents with an effectively upbeat—and slightly irreligious-sounding—bassline that climbs and traverses faithfully through the unexplored backroads of Stewart’s emotionally cool vocals. Infused with a well-written balance between melodic homesickness and a low, dark reverb on par with singer/songwriter Daughn Gibson, Stewart’s vocals carry just as much—if not more—of the track’s melody than the Tilt-A-Whirl synthesizers propelling the vehicle of the song forward. The song’s structure, particularly the bassline, may have been an extension of the band’s 2013 “MSQ No-Extra,” a track from A Different Arrangement.

“It’s Conditional” is a multi-layered epitaph seemingly lifted directly from the veins of a DMT-induced coma. Stewart’s serene vocals are carried downstream by a melancholic timbre only kept afloat by the unimposing, soft and directionless synths. Stewart’s dispirited vocals fully evade the four-and-a-half minute track—although it seems much, much shorter.

“Woods,” the fourth track on the album (and also my favorite), revels in a deeply buoyant tempo that is seemingly dissatisfied with a predictable trajectory of synth electro pop melodies. It rebelliously imbues each sombre synth with a small auger of hope, represented by Stewart’s overarching, borderline saccharine vocals that veer close to an emotional catharsis. However, the song ends abruptly before full emotional insight is revealed. Stewart lures us close, almost lets us glimpse the center and then shuts the door abruptly. It’s a perfectly eschewed, honest and frail emotional mess that had me pressing “repeat” for close to an hour.

The second half of the album picks up speed from a melodic standpoint, ushering in slightly more up-tempo, albeit not quite danceable, tracks such as “Golden Heart” and “Self Guided Tours.” Stewart’s vocals are still at the forefront of each song, providing a delicate juxtaposition between what might have otherwise been an overwhelming combination of frenetic synth harmonies and New Order–heavy vocals.

Yet, It’s Immaterial is neither overbearing nor chaotic. On the contrary, it exists within a self-professed industrial musical landscape that leaves room for listeners to not only experience the finished product but to become acquainted with the creative process as well. Ultimately, It’s Immaterial leaves a door open for listeners, inviting them inside the vivid, scintillating electropop mind of Stewart while hovering effortlessly above Black Marble’s short discography. –Kristin Porter