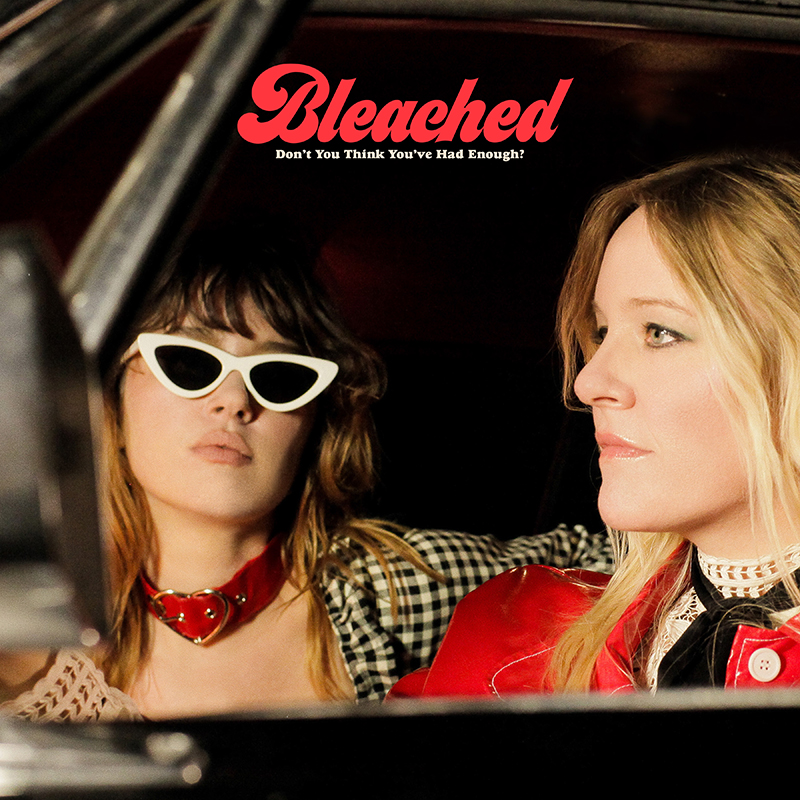 Opening scenes for the “Hard to Kill” music video feature the cat-eye sunglasses-clad sisters and formative members of Bleached, Jennifer and Jessica Clavin, running in opposite directions from the same mysterious man in black. The dizzying, syncopated guitar races against the whistling melody over a driving bass line. The attitude of the whole song meshes a Shangri-La, vintage feel with contemporary Los Angeles pop punk. As a first impression from Bleached’s third album, Don’t You Think You’ve Had Enough?, “Hard to Kill” is energetic, exciting and catchy as hell.

I have to admit, it took a few listens for this album to grow on me, but once it did, it really stuck. At first, I felt that some of the lyrics, specifically in “Daydream,” seemed too jam-packed into musical phrases, giving them the feeling of being rushed, or somehow not fitting into the music. Similarly, the opening lines of  “I Get What I Need” were almost laborious to listen to, with long, wailing lines set against staccato guitar. That being said, there is something almost sunny, bubbly, yet sarcastic and cheeky about Don’t You Think You’ve Had Enough? that make it a quintessential summertime album for me.

“Somebody Dial 911” is a bouncy love song mixing the sensations of falling in love and the dopamine of drugs with a main guitar riff that reminds me of “Friday I’m in Love” by The Cure, (the lyrics “Friday I’m in Love” can actually be found in the song “Hard to Kill”). In a similar vein, “Rebound City” is an upbeat, infectious tune with a dark twinge creeping into the lyrics, mentioning a crazy ex (by name) who was “off his meds” while the song “Valley to LA” casually mentions running away for three days as a teenager. While Bleached has a very pop appeal to them, they manage to keep the bass lines complex and the lyrics poetic and honest to give them a more punk-rock edge.

“Hard to Kill” and “Shitty Ballet,”—the first two singles off of the album—are also my personal favorites. The standout single, “Hard to Kill” sets the tone with a fast-paced tempo and lyrics that I found myself singing along to in my head after only the second listen. As the final song “Shitty Ballet” perfectly wraps up the album. Starting off with a simplistic acoustic guitar and Jennifer and Jessica singing in unison, “You take me so seriously / But I’m pretty serious / So I get it.” The song culminates and builds up to a satisfying payoff, switching to electric, with Jennifer near-yelling, “I don’t wanna pretend it’s / Ok when it’s not,” over and over again.

Overall, the tone and energy of Don’t You Think You’ve Had Enough? is cohesive, with a pop-punk, honest attitude and intriguing instrumentals that maintain an upbeat feel throughout the entire album. While some songs, such as “I Get What I Need” felt a little cliché, others, such as “Hard to Kill” and “Shitty Ballet” were oozing with originality and spunk that outshone what didn’t work for me. Instrumentally, lyrically and vocally, Bleached took some risks and delved into the personal and complex, making Don’t You Think You’ve Had Enough? all the more memorable. –Ali Shimkus