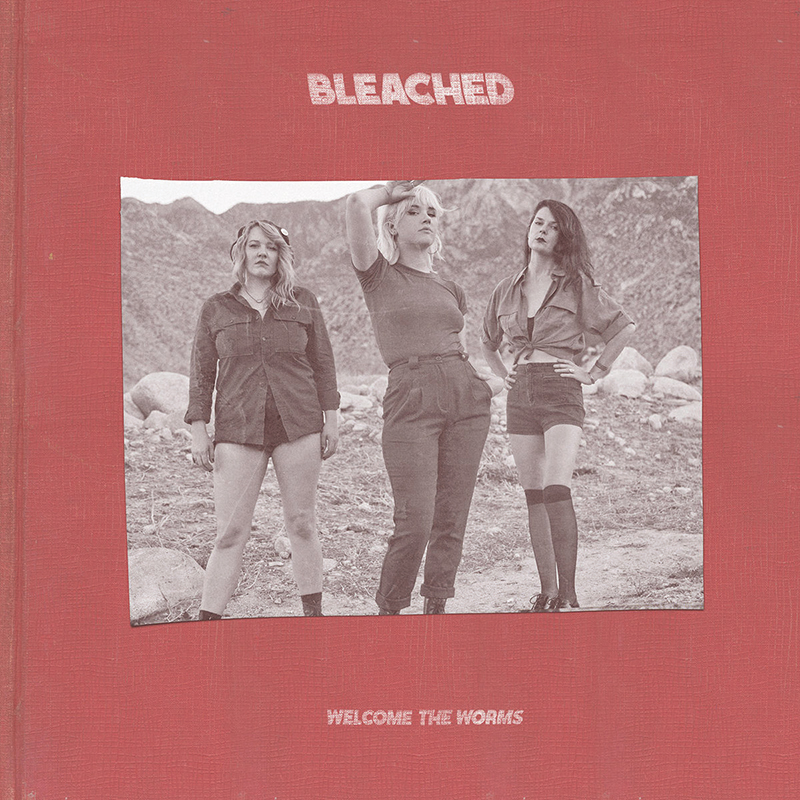 I was a little thrown by this album at first. When opener “Keep on Keepin’ On” came on, I did whatever the eardrum version of a double take is. I was like, “Wait, what? Hold on, this is Bleached?” At first, it sounded way different to me than their first album, Ride Your Heart. That song, however, doesn’t define the rest of the album and only really reappears in songs like “Desolate Town” and “Sleepwalking.” They step away from sounding go-lucky and over it—as was the attitude on their last album—and flirt with a little moodiness that progresses in a way that sounds somewhat like Bass Drum of Death at points.

Bleached play with multiple motifs at once, juggling surfer rock with grizzly riffs and the occasional bopping keyboard like in “Hollywood, We Did It All Wrong.” There are a lot of different sounds going on here, but there’s a continued dependence on the familiar, established melodies and progressions that we’ve all heard in the rough-and-tumble, ’60s girl-group set. While they’ve been compared to a rocked-out Shangri-Las, I don’t think that they ever go bodily into that sugar-slicked-slicked territory. Instead, I think they sound at their most popped-out a little like ’90s indie-pop group Plumtree (but a little blastier).

Welcome the Worms’ lyrics are a little less predictable, a little more original, than Ride Your Heart’s. “Wasted On You” is an interesting track because of the way that Jennifer Clavin shadows, weirdly, some early-’00s pop punk vibes. “I gotta stop wasting my emotions on you-ooh-ooh-ooh,” she croons, giving off some good old angst. It doesn’t stand out at first, but it’s totally there, and I’m totally there for it. The little, higher-pitched “oohs” that echo back really cement the similarities. “Sour Candy” is the sort of melancholy pop song that its title hints at being. It starts off with an audio bit of a car starting with some jumbled voices, then proceeds into lamentations about “sugar-drenched” conversations washed down with “cheap whisky and sour candy-y,” and all the while painting an image of killing time and missing chances with some guy who isn’t “the talking type,” and sounds to me like he probably hangs out with the leader of the pack.

“Wednesday Night Melody” is anthemic, starting out with stomp-stomp-stomp guitar and carried through with the melodic, “Come on boy / Dry your eyes / It’s good to feel just a little alive.” It’s one of my favorite songs here, mostly because nobody tells boys to dry their eyes, and it’s satisfying to the ear and the heart to hear such a powerful girl-set making it sound romantic and cool.

Welcome the Worms is volatile, like not-yet-set Saturday-night plans, tugging and pulling in different directions that all end up in the same place at the end of the night anyway. From its darker-hued tracks to the more typical, Sunshine State ones, the album fizzles with a carefree, youthful energy. Jennifer and Jessie Calvin sound a little grittier here, and less cute, too. Welcome the Worms does sound like a more skillfully produced and written album than Ride Your Heart, which could be attributed to more serious writing on the part of the Calvin sisters, who went through tough times in love and life during its production. The album does taste of spoiled romance and jadedness, but it captures an appreciation of those things, and of pushing through them to create something good from the mess. While “Sour Candy” did have some heavy, biker-boy aestheticism, that doesn’t mean that the emotions behind those archetypes aren’t any less rife. Bleached know that shit happens, and they tackle, pin and hang it up—a cool-girl memento banner. (Kilby Court, 04.26) –Erin Moore