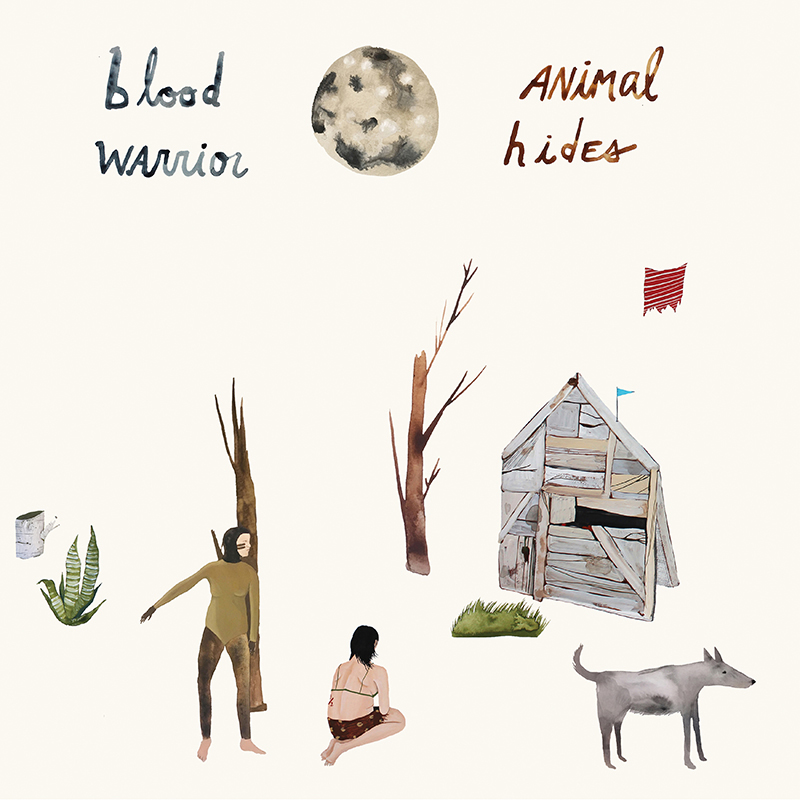 Animal Hides, the third studio offering from the northeast’s Blood Warrior, is an unpolished, lo-fi piece of dark folk. The album left me feeling unsettled, staring blankly inward and out, questioning where I’ve been, where I’m at and where I may go. I mean that in the most positive, profound way. This album is intimately moving from open to close. When the final track was over, I immediately played it all again. I put off other stuff to continue poring over what is hidden in plain sight here.

The beauty of this album lies within the simple layers that don’t mask anything. There is nothing overtly obvious—no crushing solos or production tricks, just a raw slab that’s been subtly carved to deliver something delicate and pure. Greg Jamie and Joey Weiss have been friends since they were in high school and make music together that allows them to document the pulse of their environment and the world at large. As Blood Warrior, the pair truly have it nailed down: penetrating, observant and relevant.

The album begins with “Golden Days” and completely disarms the listener; it simply puts one at ease. It’s fantastically paced and is the perfect segue to my new favorite thing, “Life of Uncertainty,” the album’s second track. This song is so sweetly drawn up as it begins shaky and somber from a tin can. With an echo, it reaches out and grasps at the listener’s attention. There is a vocal line that sticks hard just before a second guitar chimes in along with some percussion to surround and highlight the delicate singing even further. The lyrics come off as deathbed rhetoric: you know, regrets and parting wisdom. “You don’t know the trouble I’ve had / I’ve lived a life of uncertainty and folded a beautiful hand.” It’s so sad and simple, but the complexity behind such a statement can take the imagination anywhere. This song—the whole album, in fact—is brilliantly understated. I absolutely love it.

Another excellent example of songwriting is “Wooden Shade,” a track that comes right in the middle of the album. This song is the peak of Animal Hides. The prior tracks build up an emotional investment and the songs after roll down its back, cascading away into something soothing. There are slight inflections in the vocals on “Wooden Shade” that clutch tightly, but not tight enough to overwhelm. I feel that this track has the most to offer sonically as far as production and complexity is concerned. It might be the backing vocals adding another layer that isn’t found elsewhere, too. This song is as stacked as Blood Warrior gets, and it’s a highlight and as poignant as anything out there.

Animal Hides is full of music that presents the listener with brief moments of reflection or connection with something of their choice. I discovered moments scattered throughout each piece, making it hard to decide just what I was taking from each. The title track goes deep while “A Place to Hide” leaves one not needing to. I hummed the melody from “Summer Breeze” for hours, and the final track, “Drowning Flutes,” feels like a sendoff. The song plays the listener out. I felt as though I had been through something, not just hearing an album, but something bigger than that, an unearthing. Blood Warrior is great, and the duo deserve attention and downloads, for sure. –Billy Swartzfager