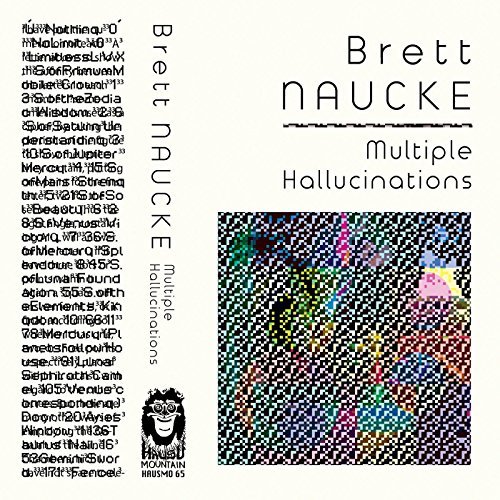 Chicago-based artist Brett Naucke releases his new album Multiple Hallucinations on the fantastic Chicago-based electronic label Hausu Mountain. As the title suggests, the album consists of multiple (30) roughly minute-long sketches (“hallucinations”) that breeze by in less than a half hour over two lengthy tracks. As hallucinations normally go, these segments move from cosmic and hopeful to bleak and industrial, sometimes without warning. The mood is certainly psychedelic, mostly due to the mind-altering pace and structure of the album.

However, this is an album format that’s tough to get right. When you rely on quickly passing segments, each segment needs to justify its untraditional length. When done well (The Faust Tapes, Sissy Spacek), the effect sits exactly between manic and compulsively ordered, and the result is usually full of clever transitions and unique sequencing. Naucke’s success varies on Multiple Hallucinations. The album offers moments of greatness in both writing and sound play interspersed with sections of weaker compositions. These few low points are more detrimental here than they would be on a conventionally constructed album, as they detract from what should be a seamless listening experience.

Generally, the first side-long track features more typical ambient material and falters a little more. There are great moments of intentionally abrupt transitions—particularly one toward the beginning where a heavy drum loop and droning synths suddenly give way to a goofy ascending line. The humor here exposes Naucke’s versatility as a composer and musician, but also helps further the playfully disoriented mood of Multiple Hallucinations. As this track goes on, these moments start to disappear. The fallback transition seems to be a simple cross-fade, and most of these ideas beg to be longer compositions. Around 11:00 in, there’s a wonderful segment that rides along a menacing 6/8 groove and features a catchy but rhythmically interesting melody. This excerpt alone could go on for multiple minutes without going stale, and there’s plenty of room for variation and expansion. When each hallucination is distinct from the next and brings about its own atmosphere, the brisk run-through can weaken some impact.

The second track (“Hallucinations XIX – Xxxv”) is more successful both in its details and overall construction. The fragments here are more abstract, which alone gives them more leeway with length. While some of the ambient material on Side One brings to mind ambient track lengths of 10 or more minutes, who’s to say how long the agitated percussion and beeping synthesizers that open Side Two should last? On top of this, there’s a more noticeable effort to extend ideas and connect the whole piece together. One of my favorite “Hallucinations” comes toward the end, where Naucke loops and warps a child’s voice over his synthesizers. By itself, it’s creepy and jarring enough to stand out, but Naucke goes further and brings this fragment back over a different backing track about a minute later. This might be a whole new “Hallucination” or an extension of the same one, but regardless it shows that Naucke has a grander concept in mind than just stringing together a bunch of one-off recordings he had sitting in a folder on his computer.

As a whole, Multiple Hallucinations is a great album to pick apart and decipher. There’s a lot of material here with dense, layered production that requires time to sift through. Some sections yield more rewards than others, but the process as a whole is exciting and proves Naucke’s ambition, technical skill and chameleonic writing persona. –Audrey Lockie