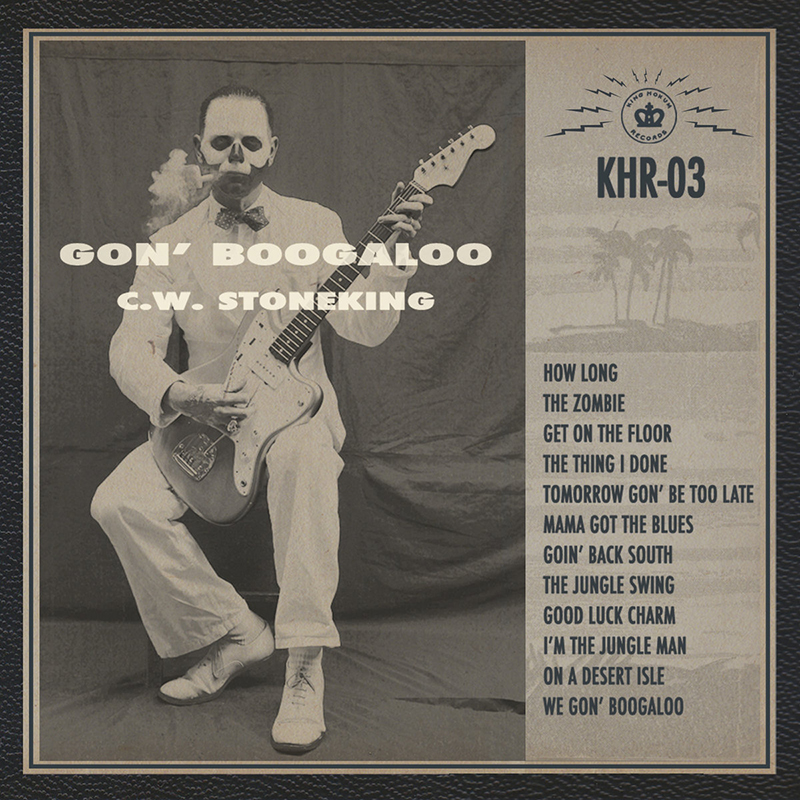 To describe C.W. Stoneking is like describing something out of a tall tale. He’s a voodoo country bluesman from Australia’s Northern Territory. He’s something of an anachronism, but not in an obvious way. He takes the stage in his trademark tropical whites and slicked-back hair and sings stripped-down blues songs about the jungle. What’s interesting about Stoneking is that while everything about his act seems deliberate and thought out, none of it feels forced or shtick-y.

Gon’ Boogaloo is Stoneking’s third studio album, and while his previous two efforts are certainly worth checking out and have that same personality, but that material is more acoustic and akin to Pokey Lafarge or Devil Makes Three. On this release, he picks up an electric guitar and connects into that amazing moment in time when blues, jazz and gospel were all being mixed up into rock n’ roll. And as if that wasn’t enough, Stoneking brings a rhythmic darkness that’s all his own, and building on top of that, his lyrics have a Lovecraftian mystery to them. Songs like “The Thing I Done,” where he says, “I roll like thunder / Go, like dynamite / All flesh and bone, I come / Old death ‘long by my side,” he bellows like a devilish Cab Calloway.

The record has a lo-fi sound quality that I’m not talking down at all. It lends to the vintage spirit of the record, and it forces the ear to reach for what’s going on in any particular tune. The other haunting effect is the girl-group-style backing vocals, which are juxtaposed perfectly against Stoneking’s grave growl-and-moan vocals.

When it comes to playing the blues today, you have to make it your own. The music is so deceptively simple, and the picture of the bluesman is so iconic that anyone trying their hand at it comes across disingenuous and diluted. The blues came out of the pain and suffering of Southern black musicians, who often turned to music to help face the reality of the times they lived in—something I don’t think we can truly understand. What we can do is creatively use the blues to tell our own stories and reflect our own feelings. That’s what C.W. Stoneking has done: He’s channeled his own darkness through the blues prism to make his own mark on the tradition that is the blues. An initial auditory impression might conjure notions of Disney’s Jungle Cruise, or even the Enchanted Tiki Room, but I assure you that this record has hoodoo powers. It’s raw and gritty, it sounds old—but it’s sharp and original. To give you the best idea of what you get with this record, I’ll leave you with words from the man himself from the song “I’m the Jungle Man”: “Down where the drums go boom, baba-boom, baba-boom, mm-mm / Anybody see me, sure ‘bout to meet their doom / ‘Cause I’m the Jungle Man.” –James Orme