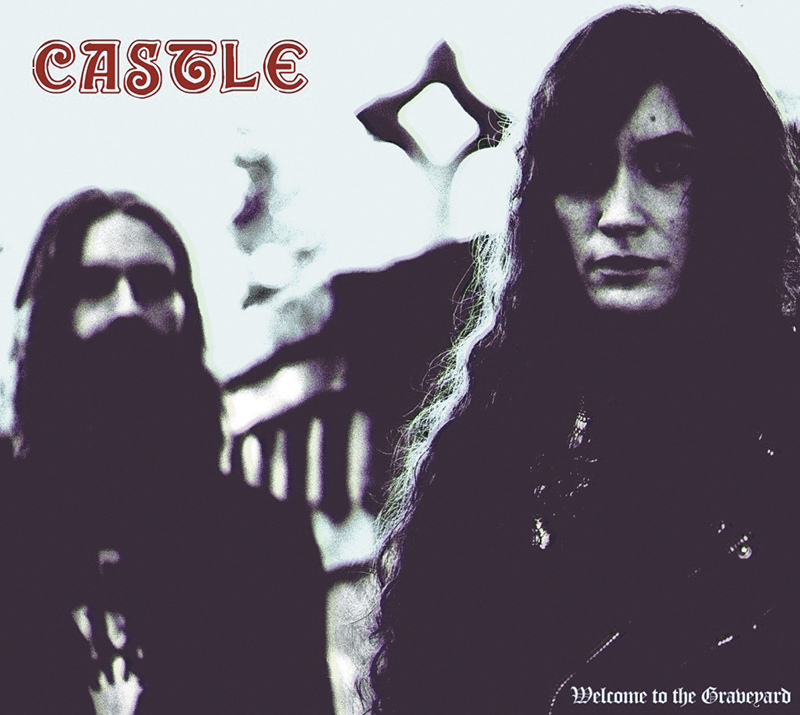 Review: CASTLE – Welcome to the Graveyard

CASTLE
Welcome to the Graveyard

San Francisco doom-thrash trio CASTLE spit their fourth album, Welcome to the Graveyard, onto the scene after two years of touring ruthlessly. Their style of doom has been enmeshed with late 1970s rock n’ roll, offering an even more melodic twist on their previous ventures. After listening to the first 17 seconds of the album, I knew the impending experience would require more expedition than usual.

A dusty Thursday afternoon found me blasting CASTLE into overwhelmed eardrums, ready for the kind of adventure only the combination of thrashy doom metal and early summer can bring. The title track, albeit the most melodically focused track of the album, ushered me into Mt. Calvary Catholic Cemetery in the Avenues. With my headphones turned up loud, the ricocheting rhythm guitars enunciated each stomp of my boots. Syncopated percussion, courtesy of Al McCartney, mirrored the evening sun beating down on the leather jacket I probably shouldn’t have been wearing.

Stumbling under the shade of a gnarled tree nearby, the breakdown in “Veil of Death” seeped into my eardrums like a listless, whispering apostate. But suddenly, I was soaring, heated, back into the swirl of cymbal-heavy tom-bashing and Elizabeth Blackwell’s sooty vocals. The odyssey of the track builds so steadily and heavily that by the end, I was stomping and churning around the gravestones without noticing.

“Flesh of the Pentagram” takes a dark turn with grating, harmonic growls. Mat Davis’ rumbling conjures phantasmagorias of the mystical and occult. Dusk came quickly. After hopping on my spoked “war horse,” the aggression of the basslines took my pedaling to a crazed maximum. I let out a guttural scream so intense that it startled a nearby dog-and-owner combo into a roadside bramble. I furiously skidded into the parking lot of my apartment complex to the last slam of the guitar strings.

In the spirit of the evening, I drew a pentagram on my forehead and blacked out my eyes with greasepaint. “Traitors of the Rune” was next on the track listing as I strayed, smirking, into Temple Square. The pulsing, heady riff mid-track brought back mental images of attending Slayer at 16. I swayed my step to the thundering rhythm and let the arcane and infernal verses consume me.

Hard rock influences are most balanced on “Down in the Cauldron Bog,” creating a motley stew of reminiscence and reincarnation. I made eye contact with a cleanly dressed couple, the horror on their faces violent. With the butt of my pants planted firmly on the reflection pool, I stared up at the illuminated temple and internalized the occult wanderings of CASTLE. Blasting bass tones unnervingly offset deep-throated wailing. A slow moving chill enveloped my body as the intro to “Natural Parallel” eddied, finally pushing the levee past its breaking point and contravening into a dissonant, rhythmic minor key. Ripples reverberated on the reflection pool in time as a branch landed, clunking to the bottom. I christened the album with a solo joint, and I knew this specific Thursday at the bar would find me more shadowy and inspired than usual.

Welcome to the Graveyard is evocative of the heavy music I grew up on. “Black Widow” is almost as if Lemmy’s wraith returned to Motörhead for one last reunion track, epitomized through a youthful throat. Often, a doom metal group attempts to reach back into the Book of the Dead and revive a slice of the style only to sound like a hopeless knock-off. CASTLE exemplify our generation’s appreciation for the metal genre’s foundation while providing a multitude of unique and eclectic intricacies that make their sound distinctive. I’ve already pre-ordered this triumph on vinyl, my suggested listening medium. Welcome to the Graveyard will be detonating out of open windows on every car ride I am in this summer. –LeAundra Jeffs