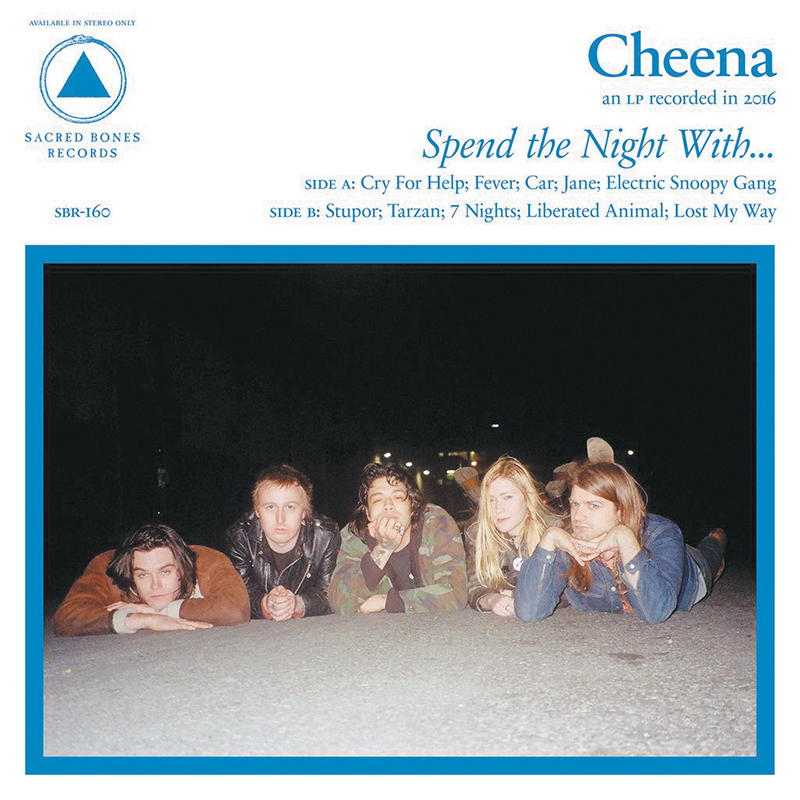 Review: Cheena – Spend the Night With…

Cheena
Spend the Night With…

The genre that seems to be gaining a lot of mass in the past few years is a sort of party punk that wants to be in your face and really wants to be drunk while doing it—and Cheena just showed up with a couple 30s in hand. Their upbeat but downtown vibe is solid enough on their debut that they manage to dip into a lot of different styles without losing precision. Their most classically punk song, “Stupor,” sounds like it came straight off an opening act for Iggy Pop at CBGB with fluttering lyrics and simple but catchy hooks. Directly after, the song “Tarzan” leads straight up to the front door of modern punk. It’s a little bit faster, a little more melodic, but still holds true to the ethos of conspicuously glamorizing drugs and the wild, black dog you feed them to.

What differentiates Cheena from the other bands popping up with this attitude is that a lot of them tend to emphasize how hard they are when they get drunk with their friends. Cheena seem totally cool with simply having a good time—nothing to prove, nothing to do. I mean, they use the vibraslap for Christ’s sake, and they still sound punk rock! Their songs are fuzzy and filled with an upbeat punk ethos that kind of makes you want to skate right through the window of a police station and laugh while you get away with the keys.

But, like I said, Cheena aren’t staying sedentary. “Electric Snoopy Gang” is a twangy folk song about their dog dying after it killed the lawn with its obviously unhealthy shit. The cool thing is that they manage to intone their own flavor and style into a fairly distant genre. This low-key Southern psychedelia is contrasted with “Car,” where the band halfheartedly laments that they can never handle a night alone. Instead, they take their gin to places they’ve never been with people they’ve never met—sounds like New York City to me.

And that’s not a joke. New York City is infamous for its long, sleepless nights packed with all the people who live in its watery confines. More than most bands coming out with new music, Cheena are a pretty solid representative of street-oriented youth living in one of the capitals of the world—the place where punk was born and continues to adapt effortlessly to our generation. It’s NYC, and everyone wants a piece of the Big Apple, but I think Cheena are already holding it in their hands, waiting for the right moment to bite down.

It doesn’t even bother me that their bonus track, “M.E.,” sounds suspiciously like that ’90s song, “Where’s Your Head At?” by Basement Jaxx (although it does a little, and I hope they have a lawyer). What bothers me is that they live on the other side of the country, and if they don’t stop here in Salt Lake City while on tour, I’m going to have to drive out there to see them play what I can only imagine to be one of the most badass shows being played in the NYUG. Anyone down for a road trip? –Brian Udall