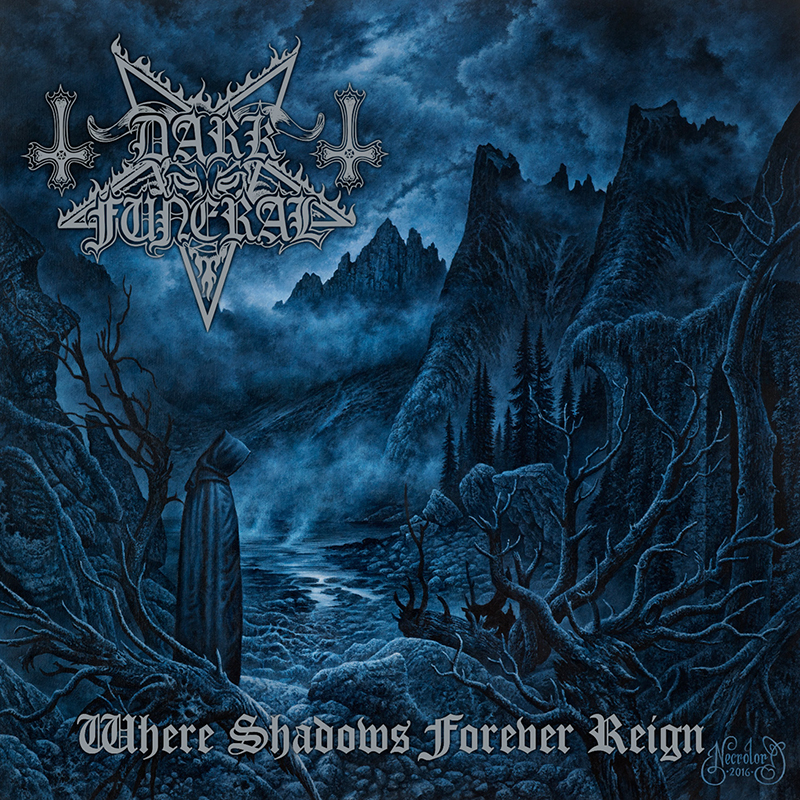 More like Dark Birth. But I’m serious, you guys: This is one of my favorite bands. Although key members have since left during the recording of Where Shadows Forever Reign (and I sure miss the hell out of former vocalist Emperor Magus Caligula), this is some solid-assed shit — like, after a day of eating nothing but concrete dust and water type solid shit — and even heavier.

This album is a ball flying out of my left field (I purposefully walk about with my fly undone for aeration), and it hits you with as much, if not more, infernal melody and crushing majesty seen in the earliest days of the band. Instead of having to take that deep breath you usually need when you play other Dark Funeral albums due to the sheer speed, Shadows is undoubtedly (or maddeningly coincidentally) a nod to their first full-length, The Secrets of the Black Arts, both in sound and aesthetics. Both album covers were done by the legendary Necrolord, who returns to add an extension to the visual storyline of the first album cover. The first track, “Unchain My Soul,” is almost an extension of “The Dawn No More Rises” from the first album. It has that plucked, chilly melodic guitar lead by Lord Ahriman and a bit of breathing space between the assaults of blast beats. And whether it’s intentional or not, Heljmadr, the new vocalist, sounds fucking phenomenal. I haven’t been this impressed with a replacement vocalist since Atteringer (TriumFall, live Propast) in Gorgoroth. “Temple of Ahriman” is a little more of the type of output that we’re used to with the fast-evil onslaught, but it’s still a bit doomier and melodically sinister. This is Dark Funeral, but I’m having an existential crisis over how original yet familiar this all is. I almost thought it was a completely different band, as “As I Ascend” played into what is perhaps the band’s slowest and most crushing moment of their album. This is easily the coolest thing to come out since my last review. Even with my ten-second memory span, I’m confident enough to say that this rules harder than shit.

Where Shadows is Dark Funeral born anew, crawling out of some inter-dimensional, gaping, oozing, primordial womb, and it probably isn’t a pretty sight. Don’t even wank about: Their discog is my phone’s entirety of music, despite the extra unused memory space. On top of giving me my top Dark Pick of 2016, the band also did me the favor of putting the birthing visuals in audio format, which kicks ass. I once watched a video of a woman giving actual birth in high school and got college credit for it (I should have received an honorary degree), I made an oath to myself, right then and there, that no human should ever be created again. With a new album from an old favorite, I’m almost moved enough to believe that humanity shouldn’t be wiped out in a cosmic whirlwind of searing radiation. I have this while I wait for that to happen, however, and I am retracting my statement that Dark Funeral could never make an awesome album without Caligula. Furthermore, Dark Funeral have again proved that they are arguably fiercer, harder and more inspired than the erection their music gives me. –Nuko Kapao