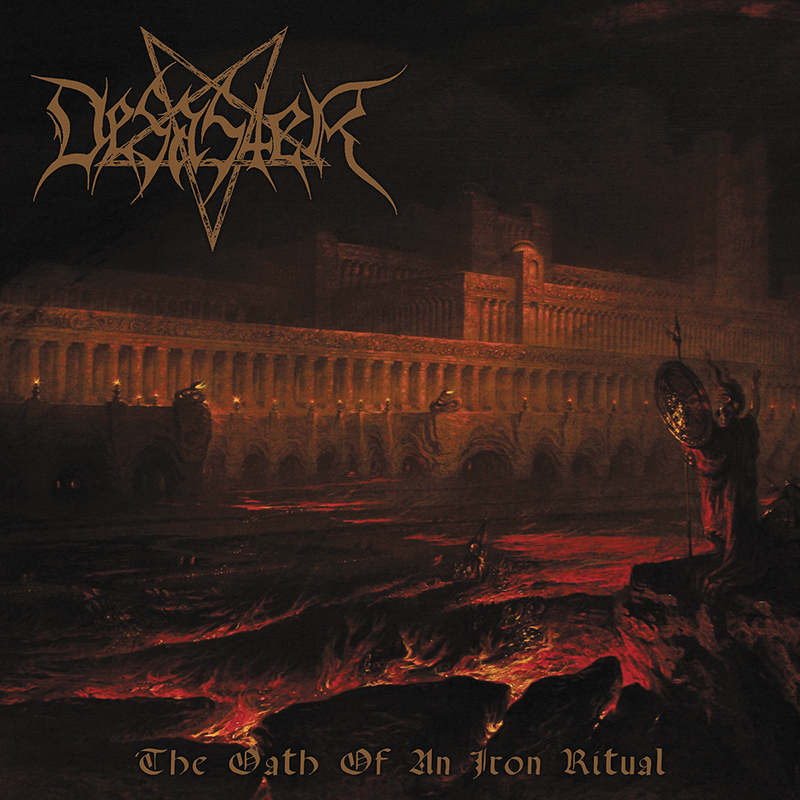 Review: Desaster – The Oath of an Iron Ritual

Desaster
The Oath of an Iron Ritual

Every black thrash fan has a go-to band, and mine has been Desaster ever since I first heard Tyrants of the Netherworld. These German juggernauts have since recorded nothing but solid slabs of raw, black iron, shot through with veins of chaotic thrash. In fact, 2012’s The Arts of Destruction still reigns among my favorite black thrash albums of all time, and there are some fierce contenders in that category. When I heard that they were putting out another album this year, I couldn’t contain my excitement. I sought it out right away and listened nonstop for a few days.

Honestly, The Oath of an Iron Ritual is a good album that suffers mainly by dint of being released after an album I hold so dearly to my cold, desiccated heart. The songs are solid and full of sword-raising riffs, but they lack the infectious, instantly memorable quality of The Arts of Destruction. At first, I thought the album might have been slower, but it was, in fact, a little faster than its predecessor. Songs like “The Cleric’s Arcanum” come ripping out of the gate with no apologies and no remorse, while “Damnatio Ad Bestias” surges with sporadic energy. Then I thought it might have been the playing, but Desaster have honestly never sounded sharper—not even on The Arts of Destruction.

One of the big surprises off The Oath of an Iron Ritual is “Conquer & Contaminate,” which uncovers an incredible Sodom-like snarl to Infernal’s guitar. Proving that a death metal groove only enhances the sensation of black thrashing misanthropy, it opens up the second half of the album with a hail of bullets and plague flies.

However, “Haunting Siren” has slowly wormed its way into my heart, coming out ahead as my favorite track on the album. Desaster have always somehow managed to nail these long-playing tracks, infusing them with variety and personality every time.

In all honesty, The Oath of an Iron Ritual might even be the objectively better album. However, the more I listen to it, the more I realize that Desaster probably don’t care much about outdoing themselves and would much rather focus on shattering skulls with their relentless black thrash attack. In that regard, they absolutely succeed. This album drips with a familiar, gleeful menace, and Sataniac’s evil laughter still sets the tone for the proceedings. It’s everything you could possibly want out of a Desaster album—no more, no less—and that’s a damn sight better than what most artists deliver year after year.

If you’re looking for a band that constantly reinvents their sound and pushes the boundaries of their genre, you’re barking up the wrong tree here. Desaster do what they have always done—crank loud, fast, heavy metal—and they do it better than just about anybody out there. For some of us, that’s enough. For now, The Oath of an Iron Ritual is a solid release that’s well worth the attention of any black thrashers out there who want a taste of the good stuff. –Henry Glasheen