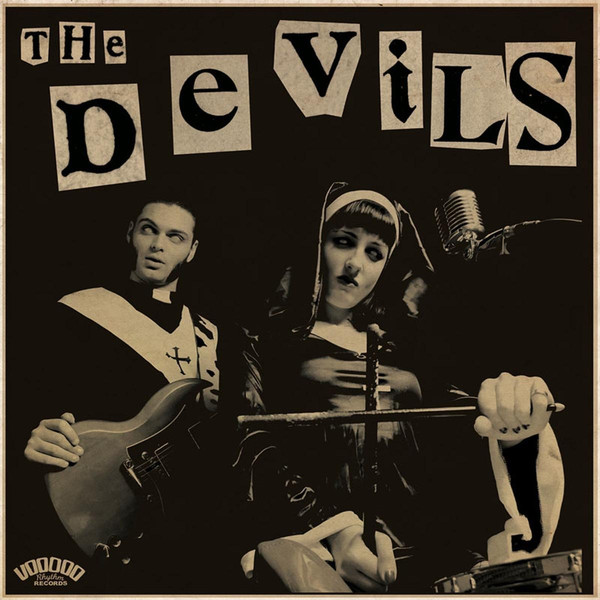 The Devils
Sin, You Sinners!

Voodoo Rhythm Records
Street: 06.24
The Devils = The Jackets + The Monsters

If you like The Cramps or The Gories, then The Devils would be good company to add to your record collection. Imagine a sound that totally devastates in its raw deliverance of absolute damnation. If your mind’s eye allows you to contemplate this scene, then your attention should be on The Devils. Hailing from Napoli, Italy, this group takes its name from the 1971 movie of the same name, directed by Ken Russel and starring Oliver Reed and Vanessa Redgrave. The film was said to be so controversial that it was subject to remain in cult-like obscurity for years after release. In some countries, the film even faced total banishment. There is no doubt that this is a hard reputation to live up to. After subjecting myself to the fury that is Sin, You Sinners!, I am confident to say that The Devils do just that. Sin, You Sinners!, came out June 24, and would be the perfect album to instill anarchy all the way from the downtown hipster bars to the quiet and complacent suburban boroughs. This is an album that is meant to fully enjoy as you pop it into the boombox and proceed to crash the local hipster or neo–new waver’s party. In doing so, you might even make some friends, or more likely, loads of trendy enemies.

Before you plug in, try to wrap your head around the fact that listening to this is akin to subjecting yourself to all that is chaos and hellfire. Sin, You Sinners! is among the best of brutal, ear-savaging rock n’ roll. This is the stuff your mum warned you about because it is raised straight from the crypts of doom and despair, aka the vaults of Voodoo Rhythm Records. Sin, You Sinners! is a brilliant display of The Devils’ furious ability to drive raw and primitive sounds into the black depths of an otherwise innocent-seeming soul. Provided this feeling invokes the proper raw emotions, all sense of freedom should be surrendered in exchange for sensational acts of voracious pleasure.

Top tracks for your immediate consideration and devouring are the wild “Puppy Nun,” the overwhelming “Drunk Town” and the demonic noise of “Hell’s Gate.” In all, what you can expect from Sin, You Sinners! is some solid trash, blood-spurting, straight-from-the-garage rock n’ roll. When playing, be sure not to cut back on the sound. As with anything thrashy like this, it needs to be played at an earsplitting level, which will hopefully inspire the need to commit utter bedlam on the local community. You know, like what rock n’ roll is supposed to implore. To be sure, Sin, You Sinners! is not for the weak of mind nor the faint of heart. Rather, Sin, You Sinners! is for the rock n’ roller who lives for the thrills of a lifestyle of authentic depravity.

With all of this in mind, go on and pick up Sin, You Sinners. From there, be sure to dig deep into the crates of Reverend Beat-Man’s Voodoo Rhythm Records. I guarantee in those crates you’ll find all that is devilishly good, much like Sin, You Sinners. –Nick Kuzmack