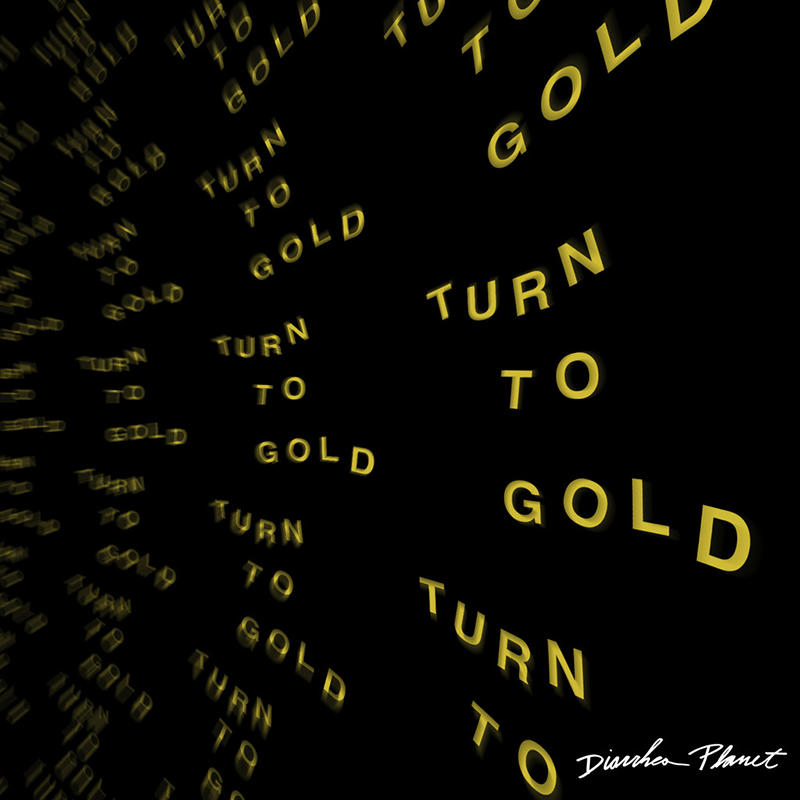 Who in their right mind would name their band Diarrhea Planet? The immediate response after hearing these two words are disgust, repulsion and a gag reflex. The name sounds more like a post-apocalyptic nightmare of a movie that only John Waters would dare direct—a movie that nobody in their right mind would chose to see! I spent a long time trying to wrap my head around this name: Diarrhea Planet winning a lifetime achievement award; a Record of the Year Grammy nomination; or being inducted into the Rock and Roll Hall of Fame. Ladies and gentlemen … Diarrhea Planet! It just doesn’t make sense. How do you market that? The band name is literally a shitshow.

My first exposure to Diarrhea Planet was through their new record, Turn to Gold. I was distracted and didn’t pay much attention. It sounded noisy, sloppy and all over the place. The vocals seemed to be by committee, the guitars swirled around, overlapped and piled up on top of each other, lacking any kind of identity. After repeated listenings, I learned to adore this band for exactly the same reasons I questioned the first time around. Diarrhea Planet are a meticulously orchestrated, gorgeous clusterfuck. Their music is the cure to depression, high anxiety, rain clouds and Mondays. It’s impossible to be in a bad mood listening to this record. The song “Life Pass” sounds like the best song on a soundtrack to one of those straight-to-VHS, softcore, vanilla porn movies from the ’80s. It’s the movie where the two guys who own the bikini shop decides to have an epic weekend party at some rich uncle’s house, and they invite everyone from the beach. It’s the feel-good party song right before the two romantic leads meet up at the hot tub. “Life Pass” kills on all levels. Listening to the guitar solo at the end of the song is what tree branches must feel like in a wood chipper, right before being ground and shredded into mulch.

Diarrhea Planet are not of this universe. Their bio pic looks like the infield of a really cool softball team that plays for your neighborhood bar, rather than a pop-punk/indie sensation from Nashville, Tennessee. DP are made up of a killer rhythm section, three different vocalists and a murderous row of four ferocious guitars. Their guitar attack is the equivalent of being lined up in front of a firing squad and shot with every riff imaginable. It’s the guitars that hold this album and the legendary live act together. You can quickly forgive the lyrics: “I just want to cruise, and if I lose control / I’ll find a better way to make it right” and “It ain’t a sin, if you win / ripping through the streets of heaven.” In the end, it just doesn’t matter. DP could sing pages from the phone book and you would be beating your chest and pumping your fists in the air, wanting more. They even have a song called “Hot Topic” that may or may not be about the store at the mall. They murder that one, too. If you need a starting point to this band you may want to jump ahead to the last track on the album: the eight-minute-plus “Headband.” It has everything. It’s like Joey Ramone, the rock side of Elvis Costello and the Descendents’ Milo Aukerman all showed up to provide vocals to a track that sounds like three different songs at once. This song will convince you that Diarrhea Planet rule every school.

DP are a band that lives for the live show. They will play your birthday party, your quinceañera, bat mitzvah, your backyard barbecue or halftime at the Super Bowl—any chance to plug in, melt your face and drill holes in your skull. Buy Turn to Gold! Live it! Love it! Just don’t buy the T-shirt—god knows what that would look like. –Russ Holsten