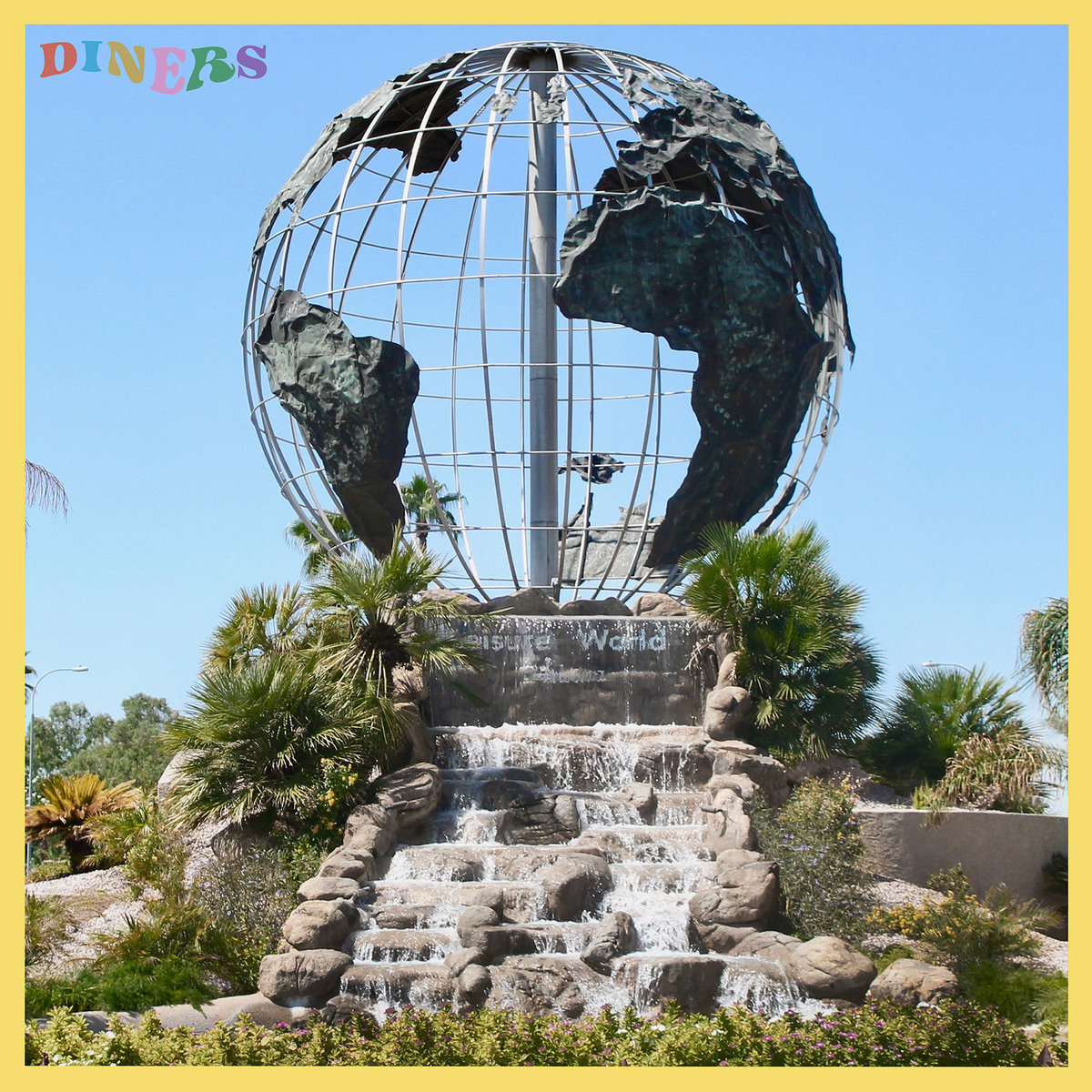 I might be a tad biased with this review since I’ve been following this band from their beginning, but hey, aren’t we all subconsciously biased about our leisures? Tyler Blue Broderick, singer-songwriter and ultimate main squeeze in Diners, hails from Phoenix, Arizona, and produces some of the most playful indie-rock songs I have encountered thus far—or, as they like to call it “that farkle wiki pop sound.”

Leisure World starts off with a whimsical tune before swan-diving into “Think on this Feeling,” a loose, upbeat track that reminds me of something I’d hear while walking through Disneyland. Broderick’s easygoing voice expresses, “So next time I’ll try / To think on this feeling / When somebody’s caught my eye / Only I can satisfy my own heart.” There’s a type of tranquil, embellished quality in not only these lines, but also in the spirited, cabaret-nuance of percussion instruments too—it’s quite the combination.

Furthermore, the next song, “Learning Curve,” reflects on Broderick’s struggles of self-improvement before they switch gears in “Big Times,” a track with ’60s beach-rock likeness about trying to make it in good ole’ Hollywood: “They say nothing’s for free / Yeah they really wanna know / What you’re made of / I call the number to see / I left my name and number / I hope that they call in a short time / A flyer I saw on a street sign / Yeah this could be you in the big time / The big time / Big time.” Yes, Broderick’s repetitive songwriting style is uncomplicated and clear, which is what I absolutely adore—straightforward storytelling of love, ambition and above all, accepting what is. Hell, who doesn’t ever think about making it big? This lyrical directness also creates a lattice with us listeners, almost like a friendship.

But just when you expect more melancholy, “There’s a Time” chimes in your ears with its cheerful jingle, and evokes, again, Broderick’s own potential as they try to “look inwardly.” Likewise, I feel there’s a hopefulness included, the hopefulness of what one can make of their future all the while living in The Now. Is it possible? I don’t know. However, I truly do appreciate the desire and chance to simultaneously labor on both. Moreover, one of the highlight songs on Leisure World is “Spinning the Yarn,” a singable, six-minute rock anthem that’s distinctly unique from Diners’ discography, musically speaking. “There’s a whole wide world / Just spinning the yarn again.” Enough said.

Without a doubt, there’s a catchiness in each song that’s similar to Neil Diamond’s “Sweet Caroline” (ba ba baaa!) as well as the shared concept of the loss of innocence. And yet, even with the knowledge and maturity that has expanded in Diners, Broderick reminds me most of Catcher in the Rye’s Holden Caulfield, trying to catch us children from falling off the cliff into adulthood—the loss of innocence that happens in a blink of an eye, without any control. I’m sure folks will see this LP as a fun, vibrant and heartfelt listen, which it most definitely is.  There is a lot more to Leisure World, however. Don’t underestimate Broderick because they are far ahead of the times. –Kassidy Waddell