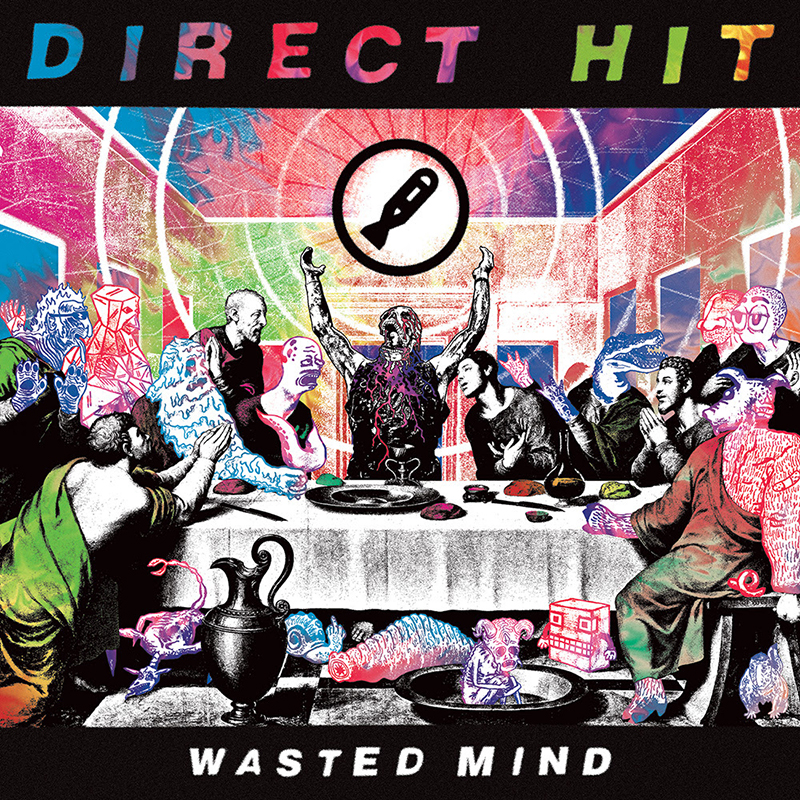 Wasted Mind is an intriguing follow up to 2013’s Brainless God—keeping in line with the concept album format, replaces the theme of religious cults with drugs and doesn’t lose any musical momentum, wit or fun in the process. Taking direct inspiration from William S. Burroughs’ Naked Lunch and Hunter S. Thompson’s Fear and Loathing in Las Vegas, the gonzo effect takes hold in Wasted Mind, with songs about acid trips and drug-fueled partying. The album begins with the 50-second “Message to Young People,” though it’s more of a warning stating that anyone over the age of 40 might not want to listen to this record. There’s a split second of silence before vocalist Nick Woods belts out the Direct Hit war cry “Fuck you! Get pumped!” and slams the chords of the melody-heavy “Artificial Confidence,” which begins the long-winded fall down the rabbit hole with a story of ingesting mushrooms in the backseat of a car. It continues with “Forced to Sleep,” which stirs up a pop-punk sound that lurks a little too close to Blink-182 territory for me, but gets thrown off the rails with “Paid in Brains,” which is a pile driver of pounding rhythms, mean yet catchy riffs and screaming vocals that complement the lyrics, which seem to be interpreting a bad trip.

This album is chock-full of catchy, melody-laden riffs and anthemic choruses that will literally pop into your head and leave the lyrics strewn across your subconscious. One such track, “Was it the Acid?” has been stuck in my head ever since the first listen. The simplicity of the chorus, which repeats the lyrics, “Was it real, or was it just the acid?” will hurdle the song as one of the new fan favorites. “Infinite Pills, Infinite Alcohol” works similarly, as its melody, backed with a sway-inducing drumbeat, stays consistent throughout most of the song. “Do The Sick” rounds out the album nicely with Woods’ voice moving back and forth between screaming through the verses and harmonizing in the choruses, an interlude consisting of an organ in the forefront followed directly by a piano solo, all while maintaining simple three-chord progressions. It’s the little tidbits like this that really make this album work—it’s got enough pop-punk sensibility that calls back to their earlier releases and just the right amount of new additions that don’t make them sound like a broken record and won’t prompt their fans to cast them as heretics.

As what can be described best as the musical rendition of Gonzo Journalism, Direct Hit kill it on this record. Wasted Mind is definitely a breed of its own—think of it as Jefferson Airplane signed onto Fat Wreck Chords. –Eric U. Norris