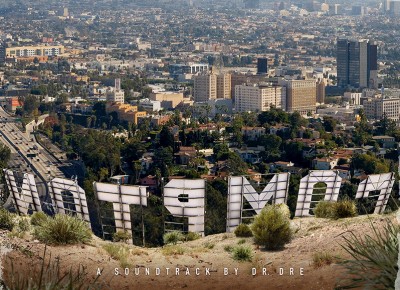 Andre Young, better known as Dr. Dre, returns after a long hiatus with a soundrack for the N.W.A biopic, Straight Outta Compton. Compton is a 16-track attempt at appeasing west coast hip-hop fans who waited over a decade for Dre to release Detox, the follow-up to his magnum opus, 2001. Coincidentally, after 16 years, it’s here… sort of.

Over 40 artists have production and writing credits on Compton; you wonder just what Young actually did besides orchestrate artists like a classical maestro—I guess you “got it like that” when you’re a billionaire rapper slash producer—but really, that’s the beauty of his musical talent. As one may see in the movie or have read in articles, whether it’s scratching on the turntables, recording vocals, producing beats or selecting samples, Dr. Dre has an ear for music that is unsurpassed in his genre. This project much like a throwback to Eazy-E’s first album, Eazy-Duz-It—where a collaborative effort from N.W.A yielded an album named after a single member—only now, Eazy-E, the self-proclaimed “miracle of modern creation,” is played by Young.

The standout song is “Animals,” which showcases the vocal talents of Brandon Anderson, who goes by the stage name Anderson .Paak. It’s the only song on the album that touches on social issues with jabs and hooks instead of light, loose brush strokes.

“Please don’t come around these parts, talkin bout we all a bunch of animals, the only time you wanna throw the cameras on, is when we fuckin shit up,” Anderson says; refreshing, because by the time the track rolls around at 14, you wonder if the album has more to do with the meandering of millionaires than the most notorious suburb of Los Angeles. Anderson’s raspy, passionate vocals and skill with the pen can be found throughout the album. He’s an artist to watch for in the future.

Ultimately, Compton is a solid album, especially on the production side, holding onto Young’s signature sound, while not sounding hackneyed. The difference between a producer who uses live strings, keys, and percussion and one that only knows how to program sounds into a computer will resonate through your speakers, because the sounds are rich and more nuanced.

Conversely, it’s just hard to fall for the same shock value techniques Young and Mathers have resorted to time and time again in their saga, especially after watching a movie in which Jerry Heller stole his money and Suge Knight treated him like Debo did Red in Ice Cube’s Friday (They’re MY masters, punk!). Instead of attacking his antagonists in the movie (and real life), Young kills his pleading girlfriend/partner in a skit after the song “Loose Cannons” for no apparent reason. Eminem, in true scumbag form, has a misogynistic rhyme about rape in “Medicine Man” that makes no sense logically or artistically. I guess when you run out of ideas, you stick with what’s been successful for you, and gratuitous violence towards women seems to work for the duo. Misogyny is much safer than addressing a behemoth with gang ties who extorted you out of millions of dollars and (reportedly) runs people over with his truck … but it ain’t gangsta.

Back in the day, rap fans banded together and partied to N.W.A music because it was edgy, entertaining and full of laughs and energy. They managed to sprinkle in a modicum of social consciousness in between Impala rides, bank robberies, shootings and regulating female dogs. The Chronic and 2001 were extensions of the N.W.A era that juxtaposed the success Dre had with the conflict between him, his group and his management teams. Somewhere in all that drama, it seems like the issues that lead to violence in Compton and the music business gets glossed over.

With a landscape ripe with social issues to harvest from Compton to Ferguson to Jacksonville, you’d think a group of talented artists from across the globe would have the insight and inclination to write or regurgitate a few lyrics about what residents of Compton and areas like it will be enduring while listening to this soundtrack. Polished beats and famous features will blind some fans from the fact that Compton missed an opportunity to make a profound statement about social justice at a pivotal time in American history. When your “house got view of the city like a high rise” it’s hard to see what the little people are doing.

Young has expressed that this will be his final album. At his current release rate he would be around 65 years old when album number four hits iTunes, so I’m guessing either he retires or names his next album “Chronic Back Pain.”

Time now for Dr. Dre to move away from the soundboard and hand the mic to the next generation of artists on the come up. From what I’ve heard on Compton, it seems like they’re ready and willing to wear the mantle, but evidently not step up to a task that calls for them to embody something that they’ve never experienced, like living in an infamous Los Angeles suburb during the crisis that was the crack, gangs and violence explosion of the ’80s and ’90s.

So long, Dre … I can’t say it’s been real, but it’s been really entertaining. Compton won’t go down in history as a classic like his other albums, because after all, how much of the ghetto can a 50-year-old billionaire who’s been rich for decades relate to?