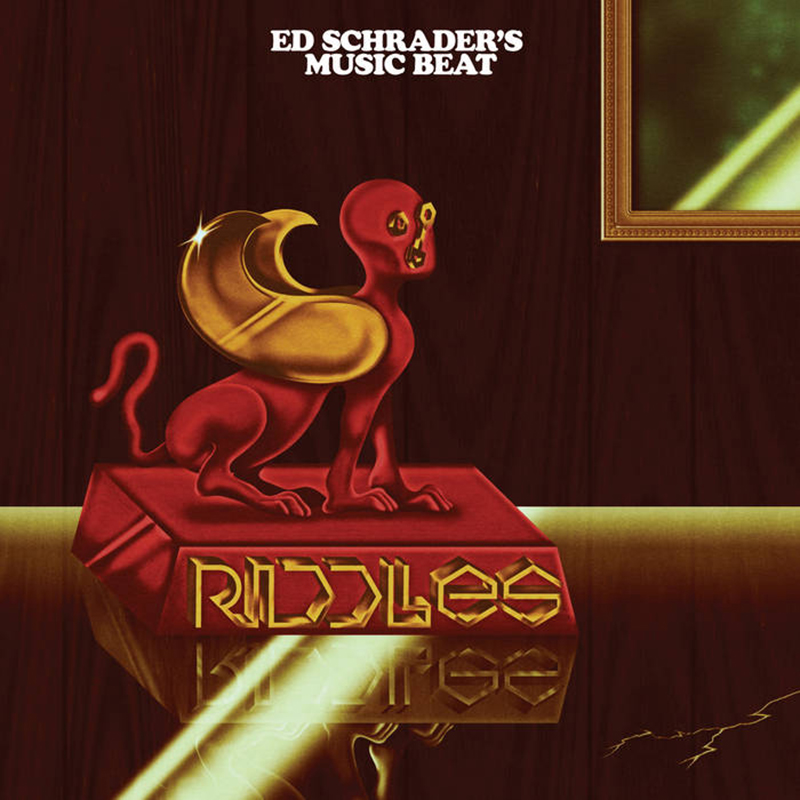 Baltimore, Maryland doesn’t have the mystique of the northern cities like Boston and New York, nor the Southern charm of, say, Atlanta or New Orleans. One of Baltimore’s famous sons, John Waters, once wrote: “It’s as if every eccentric in the South decided to move north, ran out of gas in Baltimore, and decided to stay. No one moves here.” Well, if you were to run out of gas in the state of Maryland, you would discover another favorite son: Ed Schrader.

Ed Schrader is a thunderclap talent that can fill any space with his one-man wall of sound. That is exactly what he did in the oughts. In many ways, this is probably how Schrader prefers to perform: ultimate minimalism. However, as a rubber band can only be stretched so far before snapping, Schrader had to maximize his minimalism. In 2010, he increased his lineup by 100 percent by adding Devlin Rice on bass. Ed Schrader and the Music Beat also added Dan Deacon to bring his electro-pop vision to their new album, Riddles. Deacon did just that: He brought everything but the kitchen sink to a man once famous for a reckless, kinetic one-man show. There is soft piano on “Riddles,” finger-snapping jazz on “Seagull” and violins all over the place, all walled in by Rice’s relentless bass. And wrapped with a pretty bow is Deacon’s never-ending synth lines. On this record, the lyrics get hidden in vocal manipulations of loops and feedback. It’s impossible to decipher the lyrics, but you don’t need that to figure out the heart of the album. There’s sadness in these songs, and this sadness seems to thread through every track. Prior to recording Riddles, Schrader lost his stepdad, and Rice also lost his brother. The trauma of losing loved ones fuels this duo, and Deacon taps into that and touches the raw nerve. However, while there is sadness cloaking this entire album, this is not necessarily a depressing record.

The first single and lead track, “Dunce,” is a pulse-pounding powder keg. If you listen closely, Schrader’s vocals are looped into a repeating synth line, and Schrader then sings over that. The bass feels like a heart attack, and you need to take a much-deserved break at the song’s end. The track “Tom” is an ode to Schrader’s father and perhaps David Bowie, a song about staying grounded after loss. One of the standout songs on the record is “Wave to the Water,” a synth ballad straight out of a mid-’80s Peter Gabriel songbook. It bids a subtle goodbye to the past and nostalgia: “I chased your ghost so many times / Old cartoons and battle shrines.” By the end of the track, the water has receded, and Schrader waits for the tide to come back in again.

For those obsessed with assigning genres, this album is a nightmare: indie rock, art punk, post-punk, minimalism. Don’t even try. Deacon orchestrates the most out of this duo, giving us a rollercoaster ride of emotions and song structures. The thick fuzz of “Dizzy Devil,” the thrash of “Rust” and the ’80s pop of “Kid Radium” are more examples of the up-and-down bounce of the album. Don’t try and solve this riddle of a record: Enjoy it. I look forward to hearing where these three travel next. –Russ Holsten