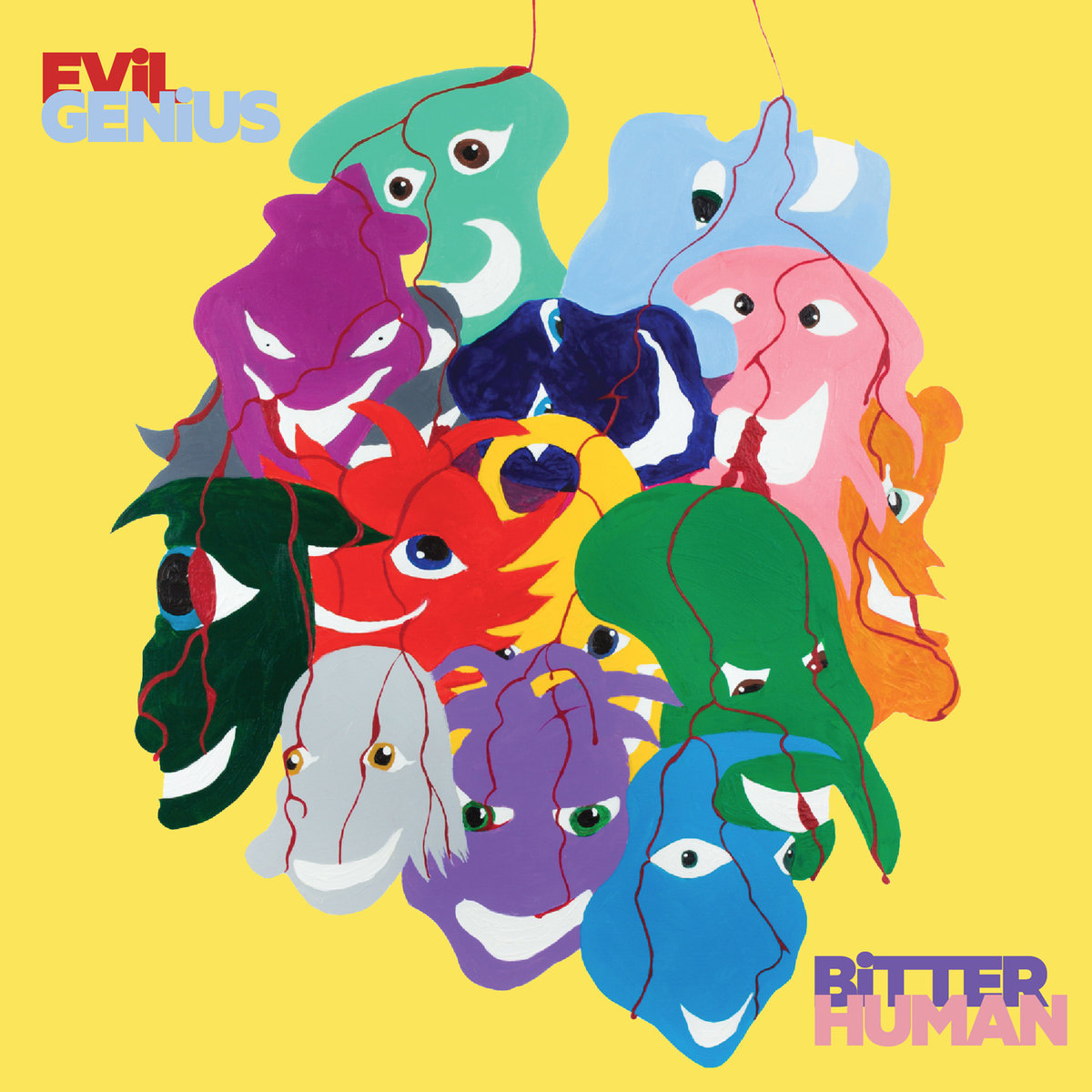 Evil Genius don’t waste time. Their debut record, Bitter Human, begins seemingly in medias res, with the band pummeling along a chain of dizzying polyrhythms and atonal chunks of guitar playing. This quickly gives way to a riff that sounds like surf-rock from hell led by the shrieks and groans of a tuba melody, and all of this happens within the first thirty seconds of the track. This opener, titled “Blind Elephant’s Green Felt Jungle Dance,” lasts a brief two minutes, but Evil Genius use each second to their advantage. The group already stands apart from others based on their unorthodox makeup of guitar (Max Kutner), tuba (Stefan Kac) and drums (Mike Lockwood), but the trio further separate themselves through their unique blend of free improvisation, progressive rock and noise music.

The second track, “Juke Prompt,” showcases the band’s multifaceted nature well. The melody that bookends the recording is surprisingly infectious and would even be danceable if weren’t for the unpredictable time changes that occur every few seconds. No matter how pleasant this section might be, the trio quickly do away with structure entirely and enter a freely improvised section led by Kutner’s skittering guitar lines and drumming that recalls Elvin Jones’ work on John Coltrane’s Ascension. The two sides of this track highlight the talents of the band that make them such a joy to listen to they are equally comfortable with riding tense, intricate rock grooves as they are creating spacious, guttural and freely improvised compositions.

Many other tracks showcase these abilities, most notably “Secondary Air” and “Share in a Regional Meat Vision.” The former resembles the opening track, a short, more thoroughly composed endeavor that jumps around musical ideas with incredible speed and precision. The constantly shifting structure can be a bit disorienting, but on “Secondary Air” the band play together so well that each piece slides together to build on the frantic energy that comes from the jumbled rhythms and grating harmonies. “Regional Meat Vision” is based more around improvisation, and even delves into some semi-conventional swing solos for brief moments. Given how the rest of the record obsessively rejects norms, this comes across as humorous, as if the group only quotes traditional jazz so they can tear it apart and return to their preferred style of dissonant clanks and skronks.

As to not overwhelm with fifty plus minutes of overly tense and blaring music, the band offers a few slower cuts to bring down the heat for a moment. The best of these, “Maneuver,” comes towards the end of the record. The band slows things down here in order to let the tiny harmonic clashes come out with Kutner’s guitar lines creating delicate harmonies against Kac’s low pedal tones. Eventually, the band lets this all fall apart as the track moves towards its bone-crushing climax of gigantic, grotesque blocks of sound. This much control over texture and harmonic color is rare for any group, let alone one based on group improvisation.

Every now and then, Evil Genius’s ambition gets ahead of them. Tracks like “Vamp for Lennay Kekua” and the title track get lost in the ether a bit and lack the memorability and punch that other cuts do. Nevertheless, Bitter Human is one hell of a debut record. Kutner, Kac and Lockwood prove themselves a force to be reckoned with and have already staked claims as one of the most noteworthy new groups in weird-rock and non-jazz improvisation. (Diabolical Records 12.07) –Connor Lockie