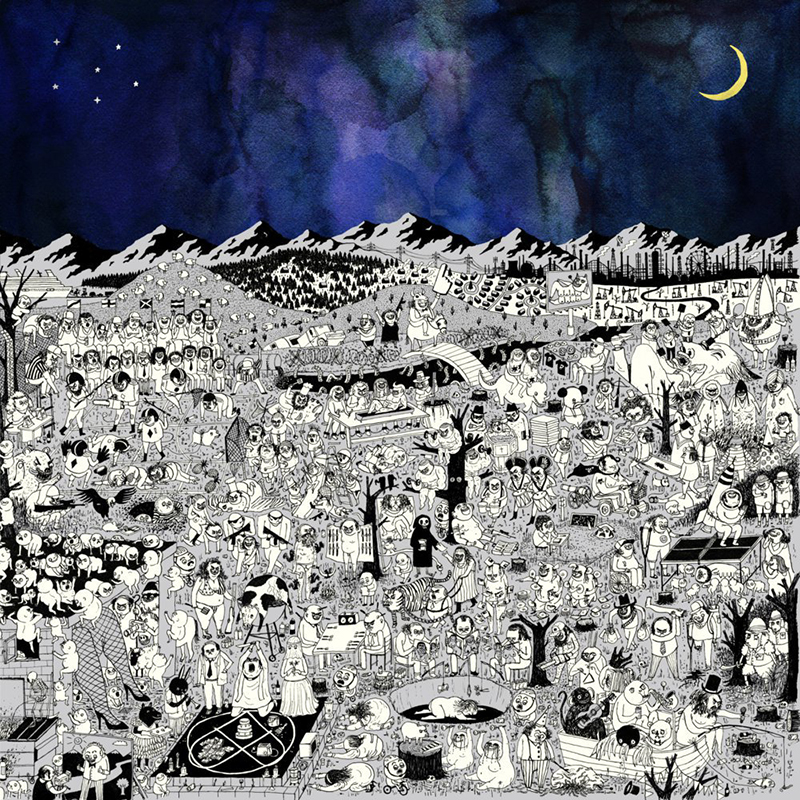 In the last few years, Father John Misty (aka Josh Tillman) has turned out to be the residing mayor of Bummertown. Having been first introduced to FJM with his incredible 2012 release, Fear Fun, I’ve slowly watched the intellectual playboy morph from critic-meets-performance genius to cynical coffee shop philosopher. For his newest release, Pure Comedy, Tillman attempts to elevate the rock album into something resembling an academic essay. It’s a noble undertaking, but it doesn’t make the grade, as Tillman offers an hour and 15 minutes of exhausting lyrical content that hardly makes it worth your time. Though, okay, fine, the man can still sing like an angel.

Beginning with their title track, Tillman makes sense of his phrase “Pure Comedy” as a best reaction or fitting title to humanity’s history—which he chooses to interpret as a revolving door of failure and ineptitude. Fair enough. He lists vague issues like corrupt leaders, religious control, the randomness of birth and “illusions” as contributors to the grand comedy that he clearly doesn’t want you laughing about. The song feels like an addendum to similar sentiments found in I Love You, Honeybear tracks like “Bored In the U.S.A” and “True Affection”—save clever devices like an audience laugh track or even self-effacement. Sadly, the voice behind “Pure Comedy” only serves as good preparation for Tillman’s incoming holier-than-thou position that will barely check itself.

Skipping over “Pure Entertainment Forever”—a nod to ideas from David Foster Wallace’s Infinite Jest—the apex of Tillman’s remove and despair is displayed in the grueling, 13-minute-long acoustic track “Leaving LA,” which is sectioned into 10 verses of a single, slow-moving cadence. In the story, Tillman expresses his disappointment with being an entertainer and a pop cultural figure. It’s incredibly dismissive and nihilistic, summing up his work so far as being “merely a minor fascination to / Manic virginal lust and college dudes.” The ending stanza, which recounts a childhood memory of choking in a department store under the sounds of Top-40 radio, ends with a clumsy suggestion that people are more concerned about being entertained than accessing their humanity. Like other, yawn-inducing tracks on the album—see “When the God of Love Returns, They’ll be Hell to Pay” and “Two Wildly Different Perspectives”—“Leaving LA” ends feeling incomplete and childishly defeated.

Lyrical quality aside, there are still good moments of Tillman’s songwriting style that I catch myself singing from time to time. The vocal melody of “Ballad of the Dying Man,” for example, or the piano accompaniment of “The Memo,” are proof that Tillman can still craft great-sounding pieces. However, he’s just lost that crucial element of fun that initially separated him as a notable artist. FJM has always been serious-minded, but he was previously able to weave these thoughts to at least trick you into thinking he was enjoying himself. Greats like “Now I’m Learning to Love the War” and “I Went To The Store One Day” are playful, lighthearted and intelligent. Pure Comedy, on the other hand, feels like a chore. If anything, I hope this album was the move for Tillman to just try his hand at writing prose for a while and actually get out of Los Angeles. My advice to Tillman is that he should take his own advice about the pointlessness of everything and use it as his best excuse to chill the fuck out. As he once said, and seems to have forgotten, “But everything is fine / Don’t give into despair/ Because I love you, Honeybear.” –Nic Smith