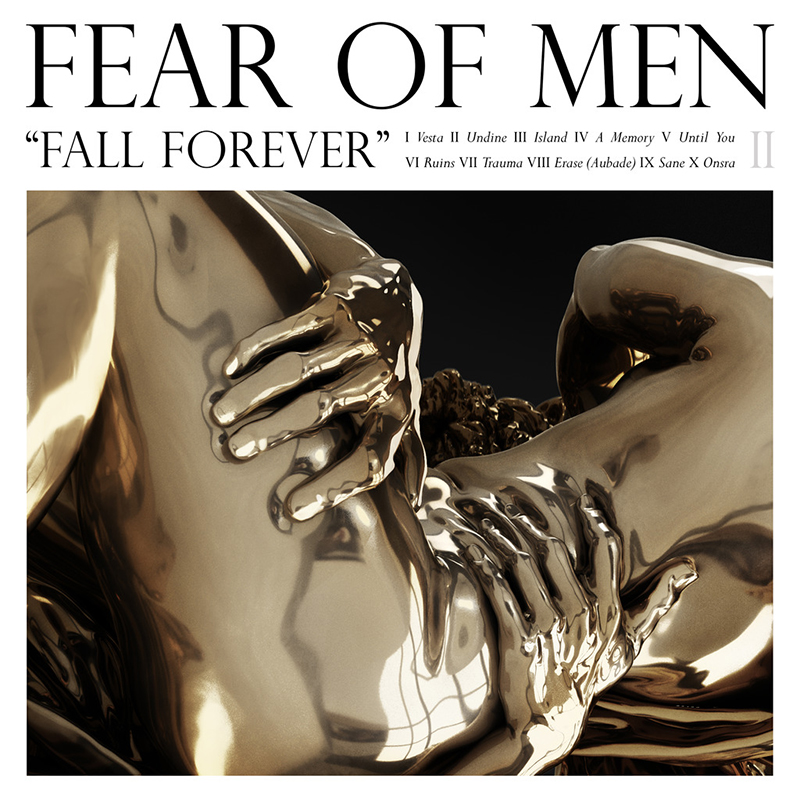 The second LP from this British trio, Fall Forever is introverted dream-pop, a soft-spoken cousin of Beach House or the Cocteau Twins. It’s not quite an ethereal ballad like “Myth,” nor a twinkling croon like “Pearly Dewdrops’ Drop.” Its swirling soundscapes and barely-there vocals are familiar and soothing to fans of the genre, but there is something slightly sinister that surfaces as Fall Forever unfolds. The imagery created is gothic in nature, almost holy in its very unholy examination of lost love.

Opening with “Vesta,” the album immediately takes on an ethereal, billowing tone that almost feels religious with hymnal vocals. Perhaps this is an intentional poke at their namesake, as the term “fear of men” is a common phrase in the Bible. Christian or not, the album is darkness sheathed in loveliness, a white sheet over a dismal memory. At its core, Fall Forever is frigidly romantic, with chilling musical landscapes and poetic musings of the heart.

In the second track, “Undine,” vocalist Jess Weiss sings, “The change in me is never what you hoped it would be.” With simmering drums, the slightest background vocal harmonies and sweeping guitar, the track is dramatic yet understated. Weiss struggles to let go of bitterness as she adds, “Force my nerves to bend / To feel what you feel / I could break apart.” The duality between the heaviness of the lyrics and the dreamy lightness of the music itself makes this album tenderly potent. The front cover is a gold feminine figure—perhaps suggesting the eternal quality of romance.

Weiss moves from resentment to independence in “Island,” as she sings, “I’m like an island / I don’t need to feel your arms around me,” adding a bit cheekily, “I will do what I want.” This is a theme to Fall Forever, a true sophomore album in that it is decidedly mature and self-aware in tone. Exploring dread, anxiety and other less-than-savory aspects of being alive, Fear of Men work far beneath the standard surface of songwriting. Fall Forever is an echo to the cynicism defined in their first LP Loom, an honest response to the human condition.

“Ruins” is a breathtaking peak of the album, introduced with a high-toned lament and followed by creaking drums and a shadowy background. Weiss’ words, “I don’t know where you go,” are particularly striking given the acapella feel of the track.  The complementary “Erase (Aubade)” declares, “I’ll always remember the hell that we made,” bringing a sense of resolution as the album begins to wane.

We’re left with “I’m a monument to myself,” in “Sane” and a tangle of both self-doubt and self-reliance in “Onsra,” with the last words uttered being, “I don’t need you anymore.”  Perhaps to fall forever is to never let the pain go entirely, to re-live a painful memory until your last breath. Whatever happened to inspire such melancholy must have been all-consuming, which translates to the just-below-the-surface, acquiescing feeling of Fall Forever.  Over the course of the album, a listener can experience all the stages of grief: denial, isolation, anger, bargaining, vulnerability, depression and acceptance. Fear of Men fearlessly devoted themselves to whispering this story to the world, not with a bang, but a whimper. –Kia McGinnis