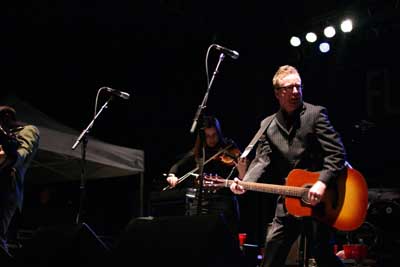 Flogging Molly
09.21.06
The U of U
With Zox and The Bedouin Sound Clash

Flogging Molly is a band that I wish I could have seen before they got huge. It would have been amazing to see them when they first formed and were playing shows at Molly Malone’s. I wish I could say they were a band that I heard way back when, before every fool in the world knew all the words to their songs. It’s not that their sound and style has depleted since they’ve gained popularity. I think it’s awesome that they appeal to people of all background and tastes of music and the breadth of people in attendance of the show exemplified just how many people they appeal to. There were 6-year-old kids in attendance with their parents, punk rockers, college frat boy meat heads with popped collars and people past 50 all coming together to see a band they love, which sounds like it’d be a delightful experience. Too bad it wasn’t.

When I first arrived at Redfest, it took me around 10 minutes to get through all the security precautions that had been set up. I ended up getting inside the show just a few minutes before Flogging Molly took the stage. My negative experience with the crowd began here. As I was pushing my way through the hordes of people I heard from behind me, “You fucking bitch, throwing elbows and shit! What the fuck do you think you are a fucking line backer?” I looked back to see who the ridiculous remark had come from. Me, a linebacker? I’m not even 5’5! What a ridiculous thing to say. Plus, Flogging Molly is a punk band and I’d like to think that anyone in attendance to a punk show would expect to get pushed around a little bit. As I turned, I was confronted by who else, an asshole with a striped polo and a popped collar. Of course the ridiculous comment had come from this frat boy meat-head who probably got his kicks from dropping roofies in unsuspecting blonde sorority girls’ drinks.

I was glad when the band took the stage, but disappointed once again when the entire crowd started jumping up and down like they were at a Blink 182 show. I’m sorry, but I don’t think rocking out has anything to do with doing the poser-salmon dance while fucking up the devil horns with an “I love you sign” instead. It’s just not okay. Especially to do that shit to such a high-energy band like Flogging Molly. Luckily, the disappointment of the antics of the crowd was quickly reversed by the immaculate performance of the band.

Flogging Molly played for an hour and a half and their set included songs from all of their albums. I literally got chills as they took the stage that didn’t cease until the show had ended. The stage presence this band has developed is a force to be reckoned with. It’s hilarious to me that these guys had trouble being signed because “bar bands don’t make money.” Flogging Molly, a mere bar band? I think not! They opened with “Screaming at the Wailing Wall” off of Within a Mile of Home. Throughout the show, Dave King shared stories with the crowd about his mother before playing “Factory Girls” and “Whistles of the Wind” and how disappointed his deceased father would be that he was drinking Guiness out of a plastic cup. The energy of the band never ceased as they belted out song after song that almost everyone in the crowd knew the words to. Some of the highlights of the show were their performance of “Seven Deadly Sins,” “Drunken Lullabies,” “What’s Left of the Flag” and “Swagger.” These were just my favorites and in all truth not a single song played in the hour and a half failed to impress the massive crowd. The show ended with a two-song encore, and amazingly enough it didn’t begin to rain until the last note of the last songs. By the time I made it to my car, there was a full-blown hale storm going on. What an epic way to end such a great night.

Few bands can move me to the point that I’m almost in tears. Flogging Molly has that power. Their live show is something that I believe everyone must experience before death. I can only imagine how amazing it would have been to see this amazing band in an intimate setting without all the meatheads and their popped collars.