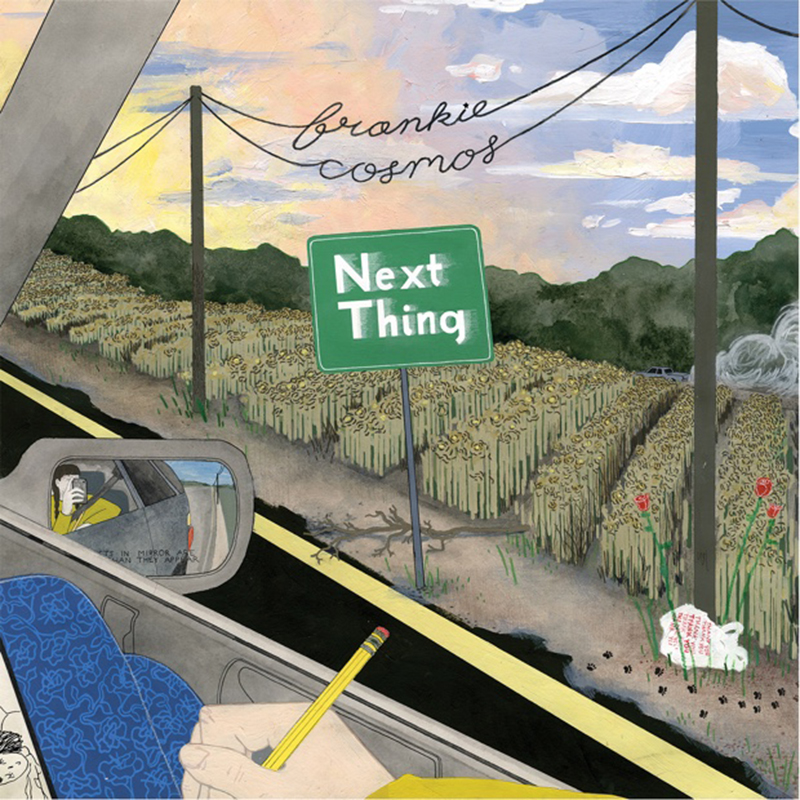 Frankie Cosmos, who goes by Greta Kline when she’s not performing, will make you fall in love with twee again. She writes the kind of pop songs that twinkle through their lo-fi realism with penetratingly simple lyrics. To listen to Cosmos is to have a personal copy of her journal in your hands—neatly written poems about friendships, insecurities and subway observations. There may be doodles of Justin Bieber (à la her “Art School” music video), or a single thought turned into an entire song—“Sinister,” for example came from the thought, “Sometimes I feel sinister.”

Though her Bandcamp is fraught with EPs, short albums and singles, Next Thing stands out as a thoughtful, more expansive piece. If an EP is a short story and a full-length album is a novel, Next Thing is more like a collection of vignettes. She has a delicate way of creating succinct yet impactful music—the kind of sticks-to-your-bones craftsmanship not always synonymous with contemporary indie pop. There is nothing trite or self-indulgent about the constructs of her compositions, no hint of the pervasive “wealthy, hip songwriter with an expensive laptop” attitude. She writes music that is a little bit electronic and a little bit pop, and it feels homey—which is not to say it’s subpar. Rather, it’s recorded in a genuinely welcoming manner that makes me feel as though I’m watching her perform at a house show or even in her own bedroom.

Next Thing opens with “Floated In,” which asks the ever-relevant question, “What are you doing?” The album is almost begrudgingly peppy, making it a dead ringer for millennials everywhere. The pacing of the tracks is upbeat but freckled with tension-building pauses that seem to reflect awkward moments in everyday human interactions. In “Fool,” Cosmos describes a lackluster romance: “I thought we could eat bread / I thought we could talk / On darker days / With our boots kicked off.” Much the same way that Taylor Swift can dropkick the world in the heart with a phrase as straightforward as “We’ve got bad blood,” Cosmos writes simple lyrics that are exquisite descriptions of 20-something love. In “Embody,” she sings, “Everybody understands me / But I wish nobody understood me / So you could be the one who did.”

Of course, love isn’t the only song-worthy topic, and Cosmos probes into other facets of being around in 2k16. In the introspective “O Dreaded C Town,” she seems to describe the decline of a friendship and announces her indifference with “I don’t know or care to know / I don’t know or care to care.” Though a few of her tracks end on a morose note, for the most part, Cosmos’ narrative is candid and sincere. In other words, it’s not wallowing-over-a-breakup music, but more  of something that you’d put on when you’re on track to hit an upswing.

I gets the feeling that I could find Cosmos slinging coffee at a local shop, figuring out student loans and what do with life—just like the majority of us. In “I’m 20,” she says, “I’m 20 / Washed up already / I’d sell my soul for a free pen / Armed with the name of your corporation.” In a way, it’s like Cosmos personally has your back, and that’s part of what makes listening to her so pleasurable. –Kia McGinnis