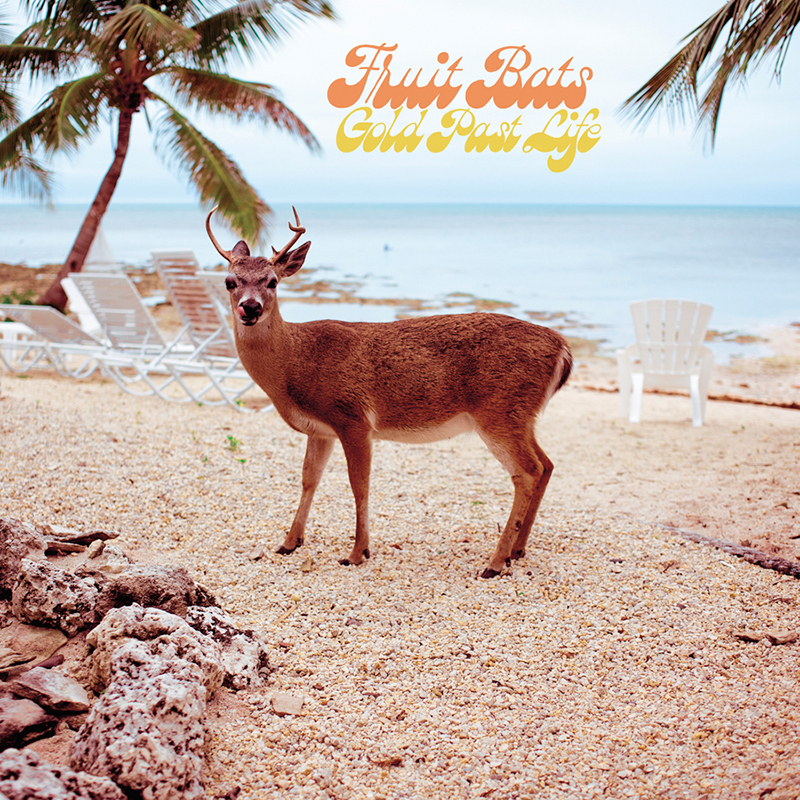 Fruits Bats are back after their three-year break with their follow up to 2016’s Absolute Loser, delivering more keyboard to the groups established folk-rock sound on Gold Past Life. The 11-track effort features additional support from Greta Morgan (Springtime Carnivore & Vampire Weekend), Neal Casal (Circles Around The Sun), Trevor Beld Jimenez and Tim Ramsey (Parting Lines) and Meg Duffy (Hand Habits) all of which bring a vast number of musical chops to their sleepy indie sound. This creates an atmosphere that will leave the listener in an internal battle between wanting to go to a party or crashing on the couch and letting time slip away.

The album kicks off with the beachy, folk-influenced “The Bottom of It,” a track that is driven vocally with distorted guitars and rattling percussion that personifies a cool, summer night into a song. The album quickly enters into an acoustic chorus before bursting into bouncy keyboards, welcoming me into the album’s title track. Gold Past Life is a simple and relatable offering that carries a certain groove, allowing for  an energetic soundscape with a chorus that shines bright in an album full of memorable hooks and choruses.

The quick, bouncy strums cut to the more spacey and power driven “Drawn Away,” which carries a more classic American rock sound with a chorus, daring me to take a second to kick back and relax. The album slows down a bit with “Cazadera,” a song that focuses on vocals and bass paired with percussion and a delightful keyboard accompaniment. The album then takes a small pause for the most folk-sounding of its tracks. “Ocean” opens with mellow strumming and almost country-driven vocals. Don’t let the slow approach fool you as this album has some tricks up its sleeve as it progresses. The next track, “Your Dead Grandfather,”  gives me an immediate flashback to watching The Simpsons. Despite its morbid title, “Your Dead Grandfather” has one of the most feel-good sounds this album can offer.

Exiting just as sweetly as it started, the album progresses into a more psychedelic, distorted atmosphere that’s accompanied with slide guitars to remind the listener that this is more than just an average folk album. “A Lingering Love” is able to pair whining slide guitars with a somber mood and energetic percussion, creating a complex track with even more complex emotions. The album continues into the strummy, synth-backed “Mandy from Mohawk,” beautifully mixing elements of pop rock and folk that will definitely get your toes tappin’. Leading with spacy guitars, “Dream Would Breathe” benefits from Eric D. Johnson’s vocals leading listeners through a dream-like soundscape with gorgeous guitars and a minimal backing, reminiscent of The Shins. The album comes to  a close with a synth-driven lead in the style in the track “Two Babies In Michigan” the most electronic sounding song with trap-tinged percussion.

The Fruit Bats added a lot to their sound in this release by featuring lot of keyboard driven elements that help to blur the lines between rock, folk and pop. The Fruit Bats bring a breath of fresh air to their already expansive discography with Gold Past Life. This album is an eye-opener to their diversity, and while it still encapsulates those true-to-character folk elements, those coming to the Fruit Bats to hear their classic sound will be pleasantly surprised. –Connor Brady