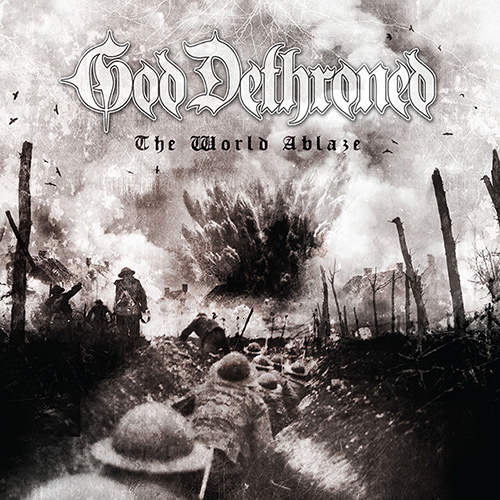 I remember coming across this Dutch death/blackened death metal band as a teen listening to the old Metal Blade Records compilation CDs. The featured God Dethroned songs stirred up my interest enough to pick up whatever GD album I could grab. I continued to listen to albums that came my way over time. World Ablaze is the band’s first new suite of music in eight years. With my unquenchable thirst to discover different and exciting bands, I often forget about the stalwarts. God Dethroned have a solid discography, and World Ablaze does not disappoint as the new addition to the Dutch death metal crushers’ long history.

World Ablaze is the third album in a trilogy of World War I–themed records, following Passiondale (Passchendaele) and Under the Sign of the Iron Cross. The Dutch extreme music scene is in need of a new band to carry its banner—with Bolt Thrower gone, the throne is vacant. With Passchendaele, it seemed like a new, brutal speed and raw, intensity-driven style reminiscent of the first couple albums from God Dethroned, come anew. It should be intense if the subject matter is World War I. Those records rip and rip some more. World Ablaze offers that same intensity but with some different dynamics. The listener definitely gets the feeling that the trilogy is coming to a close. Imagery from the title track, the instrumental “Königsberg” and album closer “The 11th Hour” allow us to survey the destruction of the war. The songs are slower, more dissonant, grimy and have a disturbed edge. Dynamics are their focus over ultimately crushing riffs and speed. God Dethroned present and wrote those songs with the same caliber of excellence, but in different ways. The fantastic “On the Wrong Side of the Wire” bridges that gap of dissonant and blasting riffs. “Close to Victory” offers some terrifying, crunching riffs.

The raw intensity from the past two albums in the trilogy remains, but some familiar territory mixed with new comes with World Ablaze. It’s a bit of renewal of some of the band’s mid-period records that featured a good chunk of melodic guitar work. The band’s main force, guitarist and vocalist Henri Sattler—who has kept God Dethroned going despite breakups over 26 years—demands attention with his gravelly, growling death vocals and guitar chops. That said, the melodic work doesn’t feel like God Dethroned are revisiting their more melodic era. The style and way it works together with the intensity of the heavy portions of the songs—such as with the absolutely devastating “Close to Victory”—punches along, and out of nowhere, a melodic break hits and doesn’t feel at all out of place. The songwriting is something to applaud loudly on World Ablaze. It’s easy to write a batch of heavy, riff-oriented songs, but applying those other touches and elements makes them stand out and leaves listeners coming back to divulge in each and every track. I say this despite much of my personal taste these days, a love for ridiculously and incessantly heavy music that is fully dominated by riffs and not a lot of dynamics. The records that I find myself returning to are the ones that offer more than that overbearing and sometimes ridiculous “brutal-ness.” My biggest complaint is that the production doesn’t seem to match the other two albums; its volume seems slightly subdued, and more importantly, the raw edge that those other records have feels muddled more than often on World Ablaze. It’s a small complaint and easily forgotten when you just listen to the album standing alone and leave the trilogy comparisons out. –Bryer Wharton