00:00 / 16:39
Spotify Stitcher
RSS Feed
Share
Link
Embed
For Erasure fans, a full-on Christmas album has always been something of a dream. Now that the concept of an entire holiday album is a reality for their 15th full-length album, the results show it has been well worth the wait. 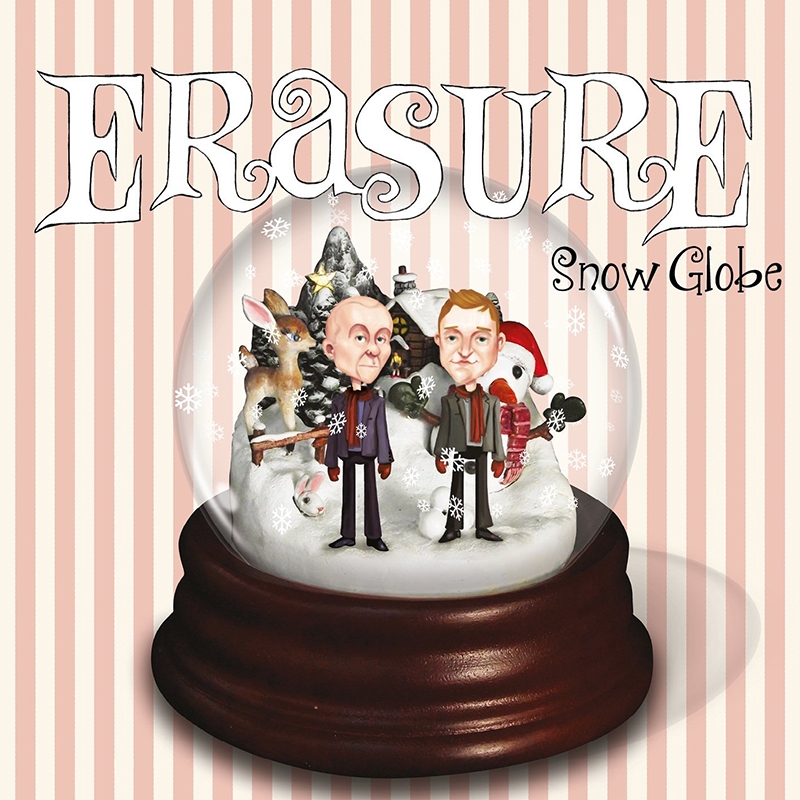 I am always humbled by receiving albums months in advance of their release. It reminds me of when I worked for a local Salt Lake City independent record store—pre Internet and file sharing, of course—and the sheer pleasure trip of not only getting to hear something in advance, but often repeatedly. I have been rather fortunate in my “industry” afterlife that this has continued, and just when I think I’ve hit promo pay dirt, I seem to come up with diamonds. It has happened again upon recently receiving the uniquely beautiful new Erasure holiday album, Snow Globe. My iTunes play count tells me I’ve now surpassed a full 30 spins, and this is owing to not only the evergreen qualities of the album—a nice balance of eight covers and five brand new original tracks—but by the talent involved in its creation. The 28-year partnership of synth god Vincent Clarke, and vocalist extraordinaire Andy Bell continues to be successful—and welcome—because of how they continue to balance each other’s musical aspirations. Bell—who really did used to sing in his school choir—and his prodigious instrument are especially strong here. On some of the traditional carols, he has rarely sounded this reverentially divine.

For Erasure fans, a full-on Christmas album has always been something of a dream. The duo’s first foray was 1988’s monster, “Crackers International” EP, which featured their now classic “She Won’t Be Home.” While a dramatic falsetto version of “God Rest Ye Merry Gentlemen” was excised for the US release, over the years, there have been the odd Christmassy nods: a very short and quirky “Silent Night” for a Warner Bros. Records promo album. Then the “Solsbury Hill” single featured “Ave Maria” as one of its B-sides, which then became a highlight during their live Erasure Show concerts. Not to mention that the actual “cover” of Chorus’ reflective “Am I Right?” limited edition remix single featured Christmas trees prominently. And even some of their album tracks could arguably be considered with these examples: Chorus’ otherworldly “Home” or I Say I Say I I Say’s “Miracle.” All of this is debatable, of course, but now that the concept of an entire holiday album is a reality for their 15th full-length album, the results show it has been well worth the wait.

The album opens with one of the new tracks, the hopeful “Bells Of Love (Isabelle’s Of Love)” which also shows a more mature lyric from the duo: “I don’t believe in your religion/I only know what I can see/So many sad, so many lonely/It’s only love that sets us free.” This perspicacious reflection is also carried nicely with the next original cut, “Make It Wonderful.” With its vibrantly ascending keyboard riffs swirling around him, Bell delivers one of his most dramatic readings of the original songs here. I really hope this is a planned single. Speaking of which, the first single is a gloriously rousing take of the Latin carol “Gaudete.” Bell’s layered vocal chanting is reminiscent of Enigma, but it is truly thrilling when he reaches his upper register, and this all in Latin, mind you! Personally, I was not familiar with this track—not even the hit 1970’s mostly a cappella version by the UK electric folk rockers Steelyeye Span—until I Googled it, but of course Clarke’s dynamically dark orchestration frames their version entirely differently: punctuating bells and a hypnotic drum program.

The other more obscure track here is their cover of Ruth Heller’s “Sleep Quietly,” which only first appeared on 2012’s This Is Christmas album by the Welsh classical-crossover vocalist Katherine Jenkins. In Jenkins’ version, it is a fairly reverent nativity hymn, but what makes Clarke and Bell’s take so exciting is how Tim Burton/The Nightmare Before Christmas-ish it sounds, especially its twisted, plunky chords. Think of a spooky Elfman-like background, but with much more serious lyrics. Bell sings this almost as lullaby, which blandishes Clarke’s synths, which is fairly brilliant. While these two tracks are lesser known than the remaining six covers are, they make a powerful impact. Those other six tracks—all Christmas standards—are beautifully executed. This holiday tune genre revival seems to come naturally to the synth legends. Witness the album’s teaser promo of “Silent Night,” from the album’s micro site and listen to an extraordinarily beautiful vocal performance, surrounded by minimally delicate synthesizers. Just wait until you hear the whole track. Similar in pure gorgeousness are their “Bleak Midwinter” and “Midnight Clear,” even the titles of which have been reinvented. Vocally, Bell seems to be plugged into a celestial connection here.

Of the three other new original tracks, “Blood On The Snow” has the most serious message—both lyrically and in its execution—but I credit the duo for experimenting with their theme in nonconventional ways. There are very subtle lyrical references to Christmas here and there, but the other two new cuts, the joyous “Loving Man” and the especially jaunty “There’ll Be No Tomorrow,” are pure Erasure: buoyant and hooky choruses, and both could easily be released as singles. Actually, none of the five would be out of place on a regular album release of theirs. This gives the proceedings a regenerative quality in the fact that these five songs particularly could be enjoyed outside of the holiday season, much akin to Kate Bush’s brilliant 50 Words for Snow project.

Although the productions details haven’t been fully released yet, I love that Erasure co-conspirator Gareth Jones (Depeche Mode, Wire) is again on board, co-producing with the band and the great Richard X (Saint Etienne, Goldfrapp). I would suspect that Jones is responsible for helping produce the vocals, and his regular high standards show. Musically, Clarke may actually have had the bigger challenge: reinterpreting well-known tracks in completely new ways. The duo has talked about “stripping” these standards down to their essential parts, and this minimal approach makes them radiate a new luminousness and frees them from the limitations that doing a cover version can sometimes dictate. The beeps and burps on “The Christmas Song” are reminiscent of a classic Atari Pong game. There is an even balance between hymns and contemporary standards and arguably the most traditional-sounding cover is closing track “Silver Bells,” which ties the theme back to the opener. That leaves the most striking cover of the lot: “White Christmas.” Is it Clarke’s intricate keys that sound almost like they could appear in Kubrik’s 2001: A Space Odyssey or is it Bell’s slightly muted vocals, or is it the marriage of both? Chillingly pretty and sublime, nearly old fashioned yet contemporary, it is precisely tracks like this that make Snow Globe stand out from the traditional holiday fare.

Snow Globe is released by Mute on November 11, 2013. A strictly limited edition three disc boxed set is available from their microsite and features a bonus disc with the 2013 versions of “She Won’t Be Home” and “God Rest Ye Merry Gentlemen,” among other new tracks, but as of the publication of this review is nearly sold out. Visit the band’s site for more details.