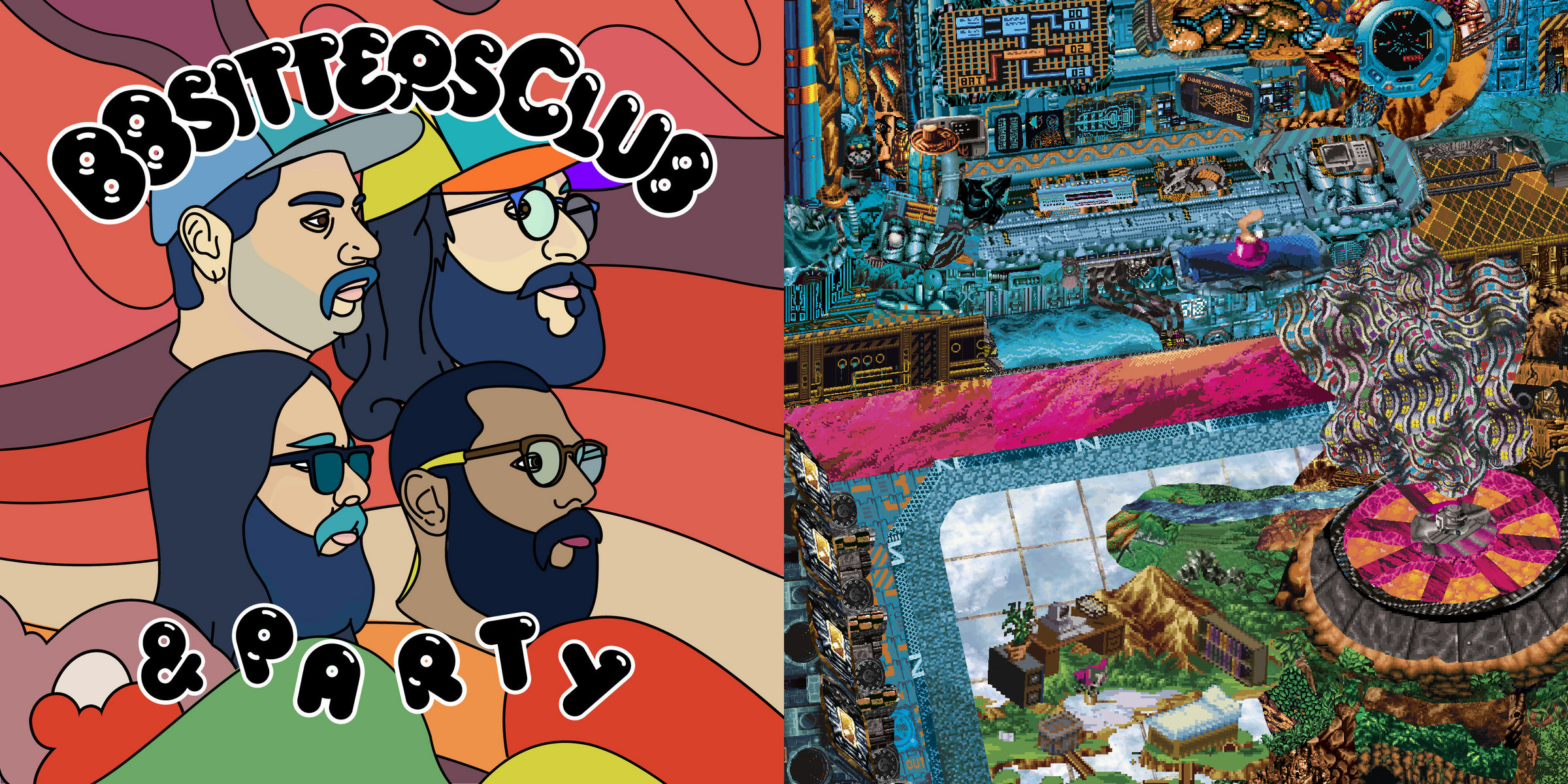 ­For seven years, Hausu Mountain have been part of a widespread effort to do away with the cool-guy posturing surrounding music’s rich, cheesy past, preaching love for the worlds of ’80s kitsch, Grateful Dead lore and proggy complexity where there was once hate. On their two latest releases—one from Hausu totem Angel Marcloid under her Nonlocal Forecast moniker, the other a jam-band featuring Hausu Founders Doug Kaplan and Max Allison alongside Charlie Olvera and Paul Birhanu—this loose guiding principle finds two of its most committed presentations. Whether they’re searching for humor, nostalgia, ecstasy, catharsis or a mixture of all these and more, these two albums thrive in their inventive recapitulations of the past.

For all the wide-ranging styles found on Hausu Mountain releases, this foray into jam-heavy classic rock still feels unexpected. As BBsitters Club, the quartet of Allison, Kaplan, Olvera and Birhanu harness the sounds and structures of rock’s most opulent histories—million-dollar-a-day- studio prog, the type of jam rock that sells out infinite-seating stadiums and more find a new home in the Bbsitters’ smirking takes on the styles. Musical references aside, the actual spirit of BBsitters Club & Party is better encapsulated through the films of Anna Biller or later John Waters: technically astounding, poised firmly on the line between parody and reverence, and ultimately concerned with having as much as possible while ravaging through the wasteland of “bad taste” and finding meaning hidden in this love of the schlock.

And this service to a jovial endgame gives BBsitters Club & Party its winning approachability. There are open references to their musical heroes (“Crazy Horse”) the food they eat (“Beef Pizza), the cigarettes they smoke (“Cutie Girls”)  the people they hang out with (the three-part “Joel” epic) the drugs they do (“Carl Blues” and many, many others), but the insular name drops don’t prevent the album from reaching a kind of universality. Instead of the glamorous fetishizations or mythic posturing many of BBsitters’ musical reference points have taken on, this realism gives the music an approachable edge—you, too, can smoke Parliaments and live the life of these rock stars.

The strength of Bbsitters Club & Party comes further in its mirroring of these lyrical characteristics in its sonics. There’s no doubt that each member of this quartet can shred with the best—and sometimes they do, as evinced through the spidery rhythmic workouts on each “Joel” iteration—but the BBsitters also imbue their instrumentals with the measuredly playful spirit of their lyrics. The austere, often burdensome, wash of ’70s pop-prog is turned on its head on opener “Crazy Horse,” with phaser-heavy washes alternating with a country-tinged breakdown. “Beef Pizza” offers a perfectly goofy complement to its two-word refrain, bouncing from a head-spinning chromatic keyboard riff into a full free-form jam before it jumps right back into its theme-song jaunt. “Told Ya” delivers a multi-part guitar workout that easily ranks among the album’s most dazzling performances. During its final instrumental refrain, mirrored guitar lines breeze through constantly alternating meters for an exhilarating bit of rock excess.

A sense of humor, play and a disregard for self-seriousness has always imbued Hausu Mountain releases, and Bbsitters Club & Party hone in on the inherent sense of beauty found in this fun-loving spirit. These musicians’ commitment to the bit honors is so intensely that the bit itself dissolves, and the resultant set of songs find real, infectious happiness. Pairs well with ashy bowls, cold fast-food leftovers and unfinished basements, as well as a monkish commitment to this way of life’s joys. –Audrey Lockie

As Nonlocal Forecast, Angel Marcloid (of Fire-Toolz fame) explores an instrumental side of her oeuvre, one that draws heavily on the ultra-saturated complexity of high jazz fusion and electro–new age. Her Nonlocal Forecast debut, Bubble Universe!, was a joyride around her updates of these styles drenched in a space-age optimism. While still undoubtedly bright, Holographic Universe(s?)! bears the weight of its titular question mark. Throughout, the musical tone leans heavier on inquisitive textures and restless sequencing. There are few moments of hard-hitting power, but the total experience feels uniquely transportive.

The imaginative, self-defining soul of Marcloid’s work serves as the guiding light of this interplanetary trip. Many of these tracks arrive in sub-three-minute bursts, a move that gives Holographic Universe(s?)! a sense of rapid development, a bullet-train journey. The first two tracks, “First Concrete Realization” and “The Missing Link is Extremely Nonlocal, Extremely Scrambled,” offers two poles of what this rapid-fire approach can do. “First Concrete Realization” arrives as a delicate synthesizer chorale. As an overture to the journey that succeeds it, the track feels like newfound wonderment at the sheer prospect of what lies ahead. “The Missing Link” is a blazing minute of metrically mind-fucked drum-and-synthesizer interplay, a dizzying blast that stands as one of the album’s most invigorating and memorable moments.

Side two’s three-part “We’re Smeared Across a 2D Surface” (presented anachronistically as parts “1,” “0” and “-1”) offers a distanced triangulation of the different sounds toyed with across Holographic Universe(s?)!. “Part 1” works with the same harmony-heavy melodicism of the album opener, while “Part 0” stands as the centerpiece of this fragmented suite, a bombastic jam-out that climaxes in a fiery,  keyboard solo from Kyle Jameson that could make Joe Zawinul grin. “Part -1” weaves in rollicking fingerpicked guitar, adding a sense of naturalistic relaxation to the album’s electronic frazzle. Under any of her monikers, Marcloid is always in the process of constructing her own musical language built out of fragments of disparate pasts. On the “We’re Smeared Across” suite, it feels the most like she’s speaking in a native tongue.

Laced within these single-statement bursts are two six-minute, saxophone-aided expansions. On “Interactions Between Brains & the Foam of Potentiality” (with Bhob Rainey) and “Space-Time = Infinity-Eternity Objectified” (with Jan Smith), Marcloid uses this extra temporal space to find tangible depth and surface area. Here, Marcloid’s universes feel livable—not the strange, jagged terrain of some other tracks, but a bath in a sauna-like bliss. If each track on Holographic Universe(s?)! stands as a new stop along Marcloid’s interdimensional journey, these lengthier tracks are two moments where the ship slows and we’re granted the privilege of rest; an allowance to soak in the recognizable beauty of the saxophones’ smooth ululations and Marcloid’s cozy beat patterns.

Where Bubble Universe! skyrocketed listeners into a colorful world unlike our own, Holographic Universe(s?)! approaches these new worlds with more serene curiosity and a sense of willful composure. There aren’t any immediate earworm hooks here or obvious mega-climaxes, but the explorations of texture and rhythm provide many moments of fascination. As has been the case with each new release, Marcloid feels like a more assured navigator of her novel sounds worlds here. But all the while, she’d still maintaining her life-affirming glee in the presence of fantasy and creation. –Audrey Lockie