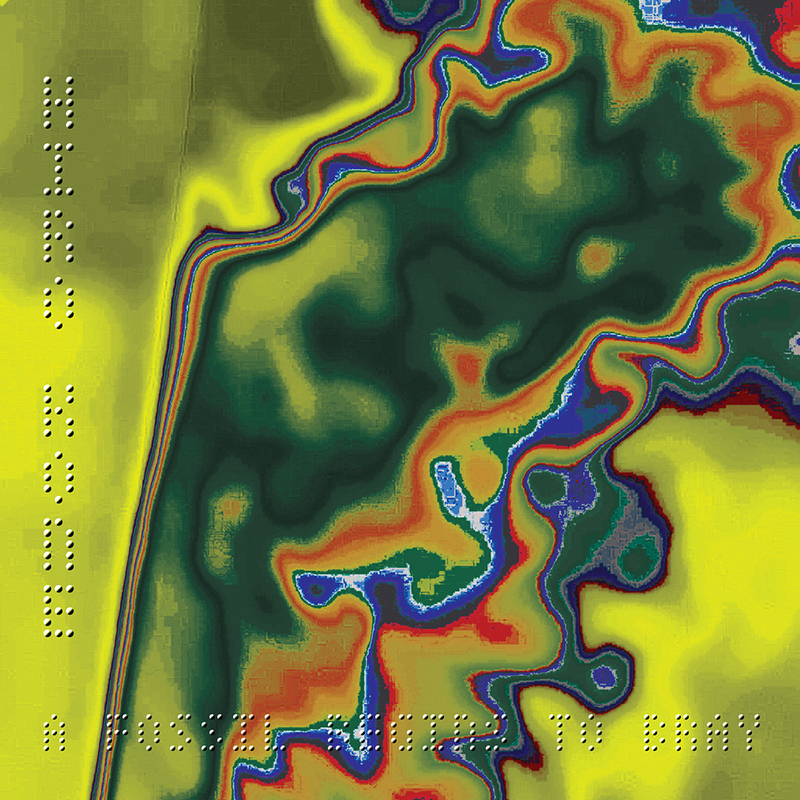 Nicky Mao’s 2018 release as Hiro Kone, Pure Expenditure, offered up some of the most massive sounds of the year. Mao’s metallic and cold-blooded take on techno merged with her background in noise and drone music for a bludgeoning album that harnessed its power to evoke solidarity and urgent political motivation. Her newest, A Fossil Begins to Bray, continues to push this unique style into more nuanced areas, adding more space and harmonic complexity without losing the breathtaking physicality at the heart of Mao’s work.

As on Pure Expenditure, Mao’s musical focus is on texture, rhythm and structure. There’s little here that will plant itself in your head, but every track will absorb and flatten you for its entire runtime. After a gradual, process-driven introduction with a driving, single-note bell rhythm on “Fabrication of Silence,” the percussion comes in like cannonballs. Each hit feels like an earth-shattering affront, an effect furthered on the lengthy centerpiece “Shatter the Gangue of Piety” and through the laser-gun jabs throughout “Akoluthic Phase.”

Against the nearly tangible punch of these beat-driven tracks is the affecting allure of the more loose and spacious numbers. The title track is cavernous, full of synthesizer sounds akin to warm purples, blues and pinks. Eventually, a treated violin lament enters and sends the track into impassioned and fully cosmic territory. “Submerged Dragon” is the album’s most restless moment, using large hunks of silence and sporadic bursts of sound. The track’s animalistic gurgles and screeches contrast the dreamy synthesizers, and even with its comparably brief runtime, the effect is shocking and awe-inspiring.

If A Fossil Begins to Bray is informed by two worlds: pounding techno and expansive drone collage. It’s further defined by Mao’s continual blurring of their dividing lines. Even the most dance-inspired numbers—such as “A Desire, Nameless” and “Fabrication of Silence”—feature minutes of patient, real-time sound creation and manipulation. “Iahklu” is a perfect three-and-a-half minutes of perfect balance between A Fossil’s musical halves. A low bass thump underlies most of the track, and the swelling hi-hats that fade in and out of the mix tease at a steady rhythm. The surrounding vocal samples and filter-modulated synths, though, pull these elements away from rigidness. Neither distinct style wins over, and this small moment of perfect and strange unity helps tie the threads of the album’s wide-ranging creative lens together.

More than just this formal sense of purpose, A Fossil Begins To Bray’s grim and sinister unity in sound design holds the album together. Every synthesizer tone, every drum strike and every subterranean bass note is a marvel of musical construction, and the final mix manages to balance each of these elements without letting one overpower the other. Despite Mao’s declarations that the album is about welcoming a necessary absence, the music here feels grand, maximal and full. “Shatter the Gangue of Piety” continuously crescendos across its seven-minute runtime and can often feel like an exercise in pushing limits. That Mao follows this brick of concrete with a stretch of less rigid experimental numbers is a salve for the album’s ebb and flow.

A Fossil Begins to Bray’s cohesion—sonic, compositional, sequential, conceptual—is a testament to Mao’s large-scale focus, a feat even greater when placed against how delicately she constructs each minute moment. There’s plenty of careful intellectualism to unpack here, but more than anything, the music begs to be turned up louder and louder until its immensity is physically flooring you. –Connor Lockie