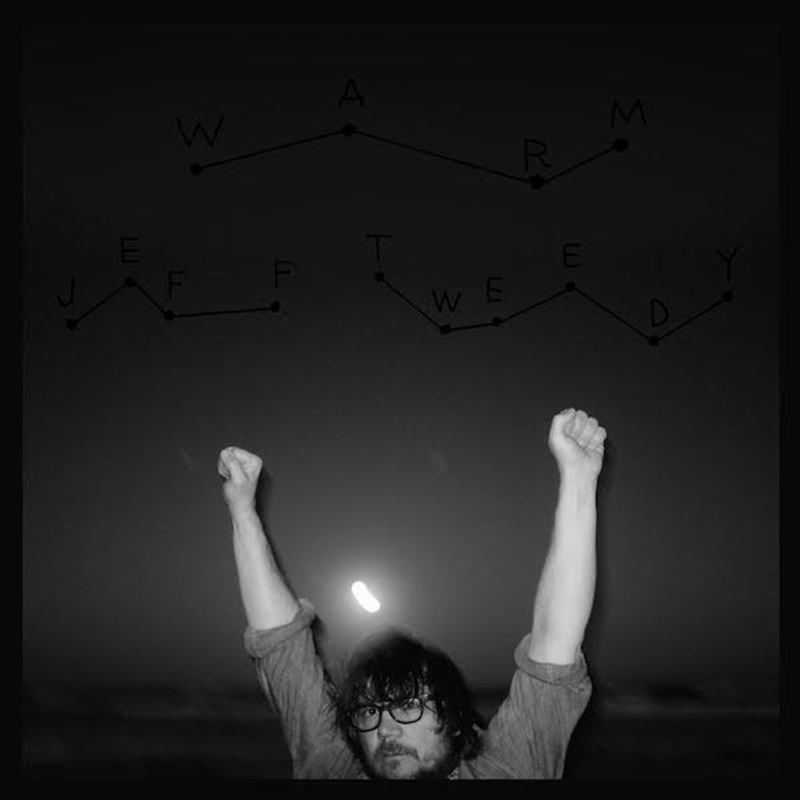 Jeff Tweedy is one of those legends/icons that drift in and out of my music consciousness—he disappears for stretches of time until I hear one of his songs, and I am quickly reminded how much I adore him. His lyrics range from subtle, silly and mundane to emotional wreckage that comes out of nowhere to sucker-punch you. He’s the dusty, well-traveled, vagabond Midwestern drifter that has set flags down and set up shop in so many stretched out destinations: Loose Fur, Uncle Tupelo, Wilco, Golden Smog, producing an album for the great Mavis Staples and recording a record with his sons. On his new solo album, Warm, Tweedy gives us his gut, heart and whip-smart mind—telling us who we are, what the world gives and where we go.

Tweedy writes like a novelist or a short story artist who understands concise, clean vignettes of time that encapsulate multitudes. “Some birds sit useless like fists,” he writes, “I lean on a wall like a broom confused” and “The countryside is full of suicides,” (“Some Birds.”) He also delivers great lines with a Tweedy kind of optimism: “We all think about dying / Don’t let it kill you” (“Don’t Forget.”) He just leaves the simple wordplay there for you to decide how it matters in the song, as well as to your life. Sometimes it doesn’t matter at all; other times, it’s an ocean of meaning in its simplicity and delivery. I figure it out more with each listening.

The track “Lets Go Rain” is an easily found treasure—it just reaches out and grabs me. Try getting this song out of your head. (You won’t.) It’s a familiar, biblical message of “reset and start over,” delivered by a higher hand. “I think destruction is an act of love,” Tweedy sings. “I think it should happen again.” He tells us let it rain, let the demons drown, and wash the world away. “I think I should build a wooden ark / Wouldn’t you like to live on an ocean of guitars?”  Who wouldn’t?. The track “Having Been Is No Way To Be” is the other emotional end of the album. It’s real, raw, and it quietly rips your insides out. It’s a little bit of an anthem for the addicted and those in recovery. “People say what drugs did you take? / And why don’t you start taking them again?” It’s a question that is always out there, and always asked by those who don’t understand. You were there once, can’t you get it together and be there again? The answer: Having been is no where to be. “I wonder how much freedom you can dream.” Tweedy reflects about a loved one. “And I’m sorry when you wake up to me.” I feel the insecurities. It’s the Noah rain all over again—restart and cleanse every single morning.

The great novelist George Saunders wrote the liner notes for this record. It’s worth the price of the album in itself. Saunders writes about Tweedy, “Jeff is our great, wry, American poet. I don’t mean this abstractedly: to see him play is to find yourself in a crowd of people being actively consoled—being moved, reassured, validated, made to feel like part of a dynamic, aural friendship.” Warm is a great album that delivers just that—a comfortable heat that gets you through your days, all from a man that has found peace with himself. –Russ Holsten