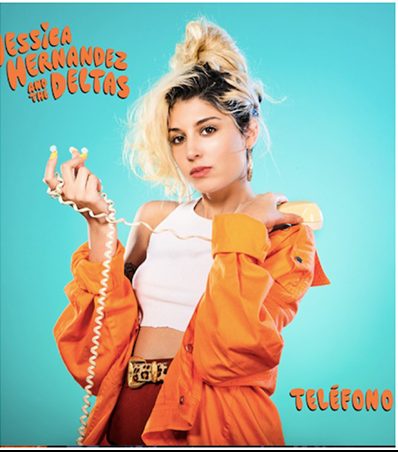 It should be a thing that any band boasting the name “Deltas” in it will be good. Catching this act in 2014, I was sold on Jessica Hernandez’s gothic take on soul. This band is moving, gripping and addictively dark. The new album, Telephone/Teléfono, takes the familiar style of Secret Evil, but in a noticeably-pop driven direction. Telephone/Teléfono shows off Hernandez’s ability to be personal and provocative.  In this record, Hernandez goes a step further by diving straight into her Cuban and Mexican-American heritage. To represent this, Hernandez recorded two versions of her sophomore album—one in English and the other in Spanish.

Both the English and Spanish recordings display a unique and fresh take on the listening experience. It’s pop for everyone, and this record represents the potential of music’s inclusive vitality. Plus, like Jessica Hernandez & The Deltas’ other material, Telephone/Teléfono still has an eclectic range of styles. It’s psychedelia surf with Latin roots, plus a definitive, punky edge—not to mention plenty of the renowned Detroit nitty-gritty.

Telephone/Teléfono has its share of top numbers. For me, “Oh No”—both the English and Spanish version—is at the top of this list. It’s groovy and fuzzed-out. It’s a catchy tune about being unable to truly forgive and forget. “Hot Damn” is another favorite. Sung in the first person, it’s about someone checking out a crush. Eerily wild and untamed, this track captures an adrenaline filled anxiousness about falling for that special someone. Bouncy and Sultry, “Hummingbird” invokes a kind of Tom Waits sound. Of all the tracks on this record, “Hummingbird” captures Hernandez’s flirtations with a poppy gothic essence.

“Hot To Trot” makes obvious nods to Riot grrrl angst and punky deviancy. It’s jumpy and energetic with plenty of whoa-oh-oh-ohs. This is the kind of track to get up and going to for a night of delicious and dangerous adventure. “Fire & Ice” is kind of jazzy, hearkening to Amy Winehouse’s style with a little Nina Simone. In this track, the piano is prominent. Coupled with Hernandez’s impressive vocal range, this songs drives a cool and collected feeling to the theme of the complexity of loveless confusion.

After getting my hands on this album, I‘ve had it on a constant rotation in my listening list. Telephone/Teléfono is fun, fresh and brilliant. Jessica Hernandez & The Deltas have a special gift of being able to capture and package the might of their live performances into a record. This album is a worthy successor to Secret Evil. It’s no surprise, as anything recorded by this band truly holds its own. Having seen them live on numerous occasions, I will swear by this. It’s contemporary soul without whitewashing or blandness. Furthermore, this record actually contains material that inspires and makes me feel the blood rushing through my veins—given the current climate, I’d have to say that is rather important. Make sure to play Telephone/Teléfono loud and everywhere. It’s solid and meant for the soul. –Nick Kuzmack