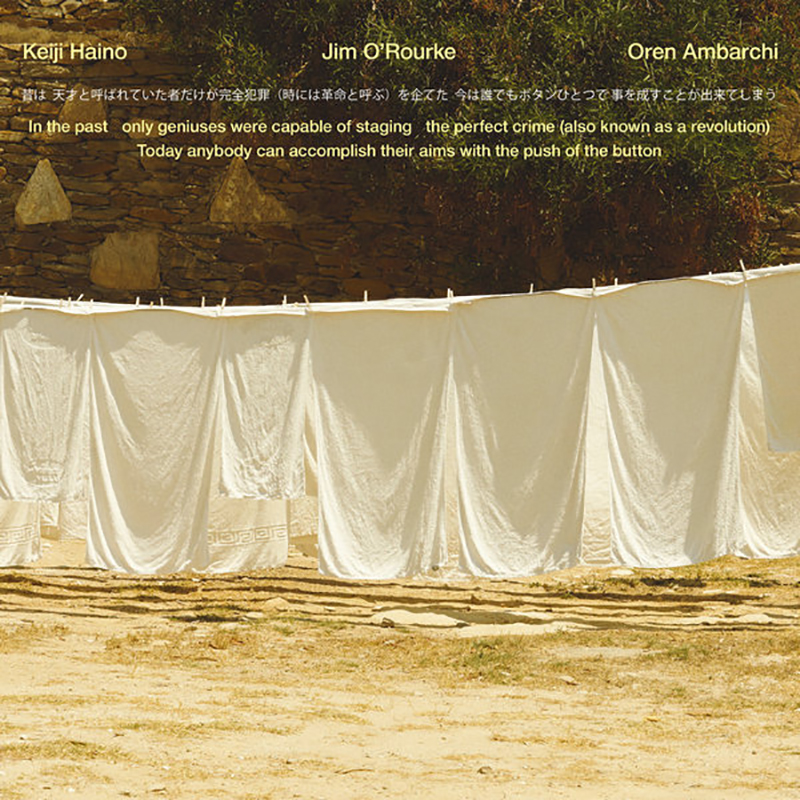 Review: Keiji Haino / Jim O’Rourke / Oren Ambarchi – In the past only geniuses...

The (almost) annual improv releases from the trio of Keiji Haino, Jim O’Rourke and Oren Ambarchi comprise one of the most consistently rewarding album series of the decade. These live recordings rely mostly on a rock power-trio format of vocals and guitar (Haino), bass (O’Rourke) and drums (Ambarchi), with an emphasis on finding the common ground between these three experienced musicians’ approaches to free improvisation. Equal parts noisy drones, lead-heavy rock riffs and 21st-century avant-gardisms, the ninth album in the series, In the past …, delivers nearly 90 minutes of some of the trio’s most refined work to date. If the novelty of their sound has worn off over 10 years, their comfort with and control of a singular group sound has reached an unmatched high.

In the past … opens and closes with the trio at their most groove-oriented and forthright, highlighting the impeccable synchronicity between O’Rourke and Ambarchi and the expressive qualities of Haino’s guitar solos. The opener begins in torrential chaos—with O’Rourke’s serpentine basslines and Haino’s erratic, laser-gun guitar bouncing around the mix while Ambarchi slowly coheres his splashing cymbals into a tight groove. The resulting 3/4 pattern that O’Rourke and Ambarchi settle into provides the album’s heaviest, most headbang-ready moment as the latter eventually shifts to rifle-like snare shots. Following these two through their slow changes alone is hypnotizing in their exactitude, saying nothing of the freewheeling and soaring melodies that Haino layers atop their base.

Throughout In the past …, but especially on these two bookending tracks, Ambarchi’s drumming is some of the finest ever within this album series. He’s a deceptively simple player, relying mostly on minor changes to straight-ahead, metronomic patterns as opposed to a wayward, arrhythmic free jazz approach. At its best, as in the blood-pumping rush at the conclusion of “I always walk around …,” each added tom hit or cymbal crash feels monumental. “I always walk around …” thrives on Ambarchi’s understated playing, allowing for a spellbinding group crescendo to occur. He’s neither pushing his collaborators nor trailing behind them; his ever-ascending tom hits are exactly in tune with the whole trio’s movement.

Between these two rockist jams lie three tracks that explore the more spacious, harmonically dense side of the trio. “Decorously decorously …” is the sparsest of the set, building itself around a repeating melodic bass motif and splashes of sound from the remaining musicians. The addition of O’Rourke’s Hammond organ adds another element of harmonious sustain to the surrounding, otherwise noisy and jagged music. Generally, these releases are skewed more in favor of Haino’s typically distorted rock improvs than they are the romantic harmonies found in O’Rourke and Ambarchi’s solo work, but this middle chunk of In the past … eases the torrent and allows for more overtly pleasant music. The midpoint of “Decorously decorously …” picks up the speed and density, but O’Rourke’s floating organ tones and Haino’s scratchy, reverbed guitar noises retain the track’s cosmic atmosphere.

If In the past … is defined by these moments of individual highlights within an otherwise ensemble-focused sound, the second iteration of the title track is Haino’s vocal showcase. The instrumentation is uncluttered, leaving plenty of room for Haino to deliver an intricate, varied vocal improvisation. Over the heavenly drones and light, bell-focused percussion playing, He hits every corner of his rhizomatic range. He begins with smooth, melodic singing, emphasizing each syllable and breezily gliding into his upper register as the track’s energy accumulates. He’s quick to contrast this legato style with low-end growls and short, jagged whispers, and the entire performance feels like a winding distillation of all his strengths. Even as the music busies and Haino moves to screaming territory, the track never loses its ambient bliss. The airy drones betray any sense of aggression, and “In the past … Part 2” closes on some of the most arrestingly beautiful music on the album.

From Tima Formosa on, each release from this trio has felt like a balance of maverick experimentation and a knowing reliance on a core sound. In the past … doesn’t have any completely out-there tracks, such as the wine-glass choir that opens Now while it’s still warm … or the bağlama and vocal duets on I wonder if you noticed …, but it thrives on a crystallization of the Haino / O’Rourke / Ambarchi sound. Nine albums in, the trio has honed in on a decidedly unique approach to rock improvisation. They’re always building off of this firm foundation, allowing themselves to experiment subtly with their roles and relationships to each other. Perhaps the closing of SuperDeluxe, the venue at which each of these records was recorded, suggests that In the past … is the conclusion of this decade-long series. Either way, these albums stand as a treasure trove of improvised music, a relentless exploration of the limits and possibilities of rock as a style, a form and an ethos. –Connor Lockie