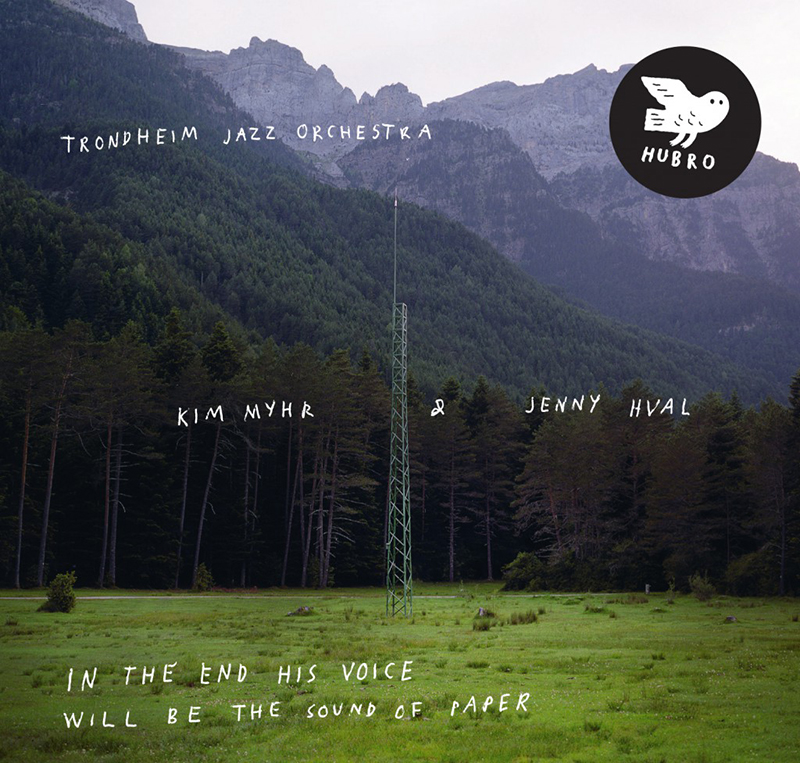 Review: Kim Myhr, Jenny Hval, and the Trondheim Jazz Orchestra – In the End His...

Kim Myhr, Jenny Hval, and the Trondheim Jazz Orchestra
In the End His Voice Will Be the Sound of Paper

In the End His Voice Will Be the Sound of Paper is the follow-up collaboration between improv guitarist and composer Kim Myhr and Norway’s Trondheim Jazz Orchestra, the first being 2010’s Stems and Cages. While the first album featured a collection of different vocalists (including famed jazz vocalist Sidsel Endresen), Jenny Hval provides the majority of Paper’s vocal work. The album is innocently dark, like a small child with a ghastly premonition. It alternates between moments of raving, post-apocalyptic nightmares and harmless reflections under a forgiving moon.

The cover itself speaks greatly to this dark innocence. Depicted in a color palette of purple-blues, yellow and earthy greens, and cold silver, is a fully forested mountain range, a lone metal tower situated center field and a threatening sky spreading far above the scene, washing everything in a melancholy light. There is a certain commentary about the relationship between technology and nature, each blameless in its own right yet potentially devastating when together. But one also is left to wonder if this is a meditation on passive loneliness—an inability to ever become part of something else, never reaching, never touching, always existing as an island surrounded and apart. The HUBRO logo (a soaring creature that appears to be part ghost and part owl), present on all releases from the label, boldly stands out here. It can’t help but remind one of the Owl of Athena—the fluttering beacon of wisdom—perhaps fleeing the lushly desolate scene, for a reason at which we can only wonder.

The album opens with a delicate lullaby, “Seed.” With its tingling percussion, whispered vocals, vamping background instrumentation (synth, accordion), and no-hurry-no-worry method, “Seed” prepares you for the world of Paper with little more than a short breath of sound. “Me, You, Me, You,” begins with the sounds of non-committal pipes blowing over briskly plucked strings, and eventually, a high-pitched whistle is introduced as Hval’s voice peaks, conspicuously traveling with adept skill through the grand highs and lows of her range. The song finally climaxes in a sweep of classical guitar flourishes and ultimately falls apart into small murmurs from each contributing instrument. “The Beak” is the perfect mixture between the intimate acoustic sounds of Bon Iver’s For Emma, Forever Ago and the purposefully dissonant singing of Yoko Ono’s early avant-garde work; it’s quite easily my favorite track. If there is a single song that is built solely on its ability to transform and surprise, it is “Mass.” In adherence to its religiously leaned title, “Mass” features monastery chanting and an overall reverent tone until a frantic strumming and ecstatic vamping begin, turning the song on its head to form a black mass right before the listener. The frenzy lasts nearly eight minutes, each moment testing the fortitude of the common listener and rewarding the adept. The album closes with “Silence a Beat,” a song not entirely dissimilar to “Seed.” In relation to one another, they act as polite bookends to a rather rambunctious book. What better way to say hello and goodbye than in a whisper?

All in all, Paper is not an album for the lighthearted—but the best albums never are. It is a work for the jaded wanderer, for rainy skies, for the late nights of uncertainty, for the disconnected and alone. In skill and scope, it is masterful. The recording is intimate and alluring, haunting and fearsome—a grotesquely beautiful paradox of sound, pleasing to the last. –Z. Smith