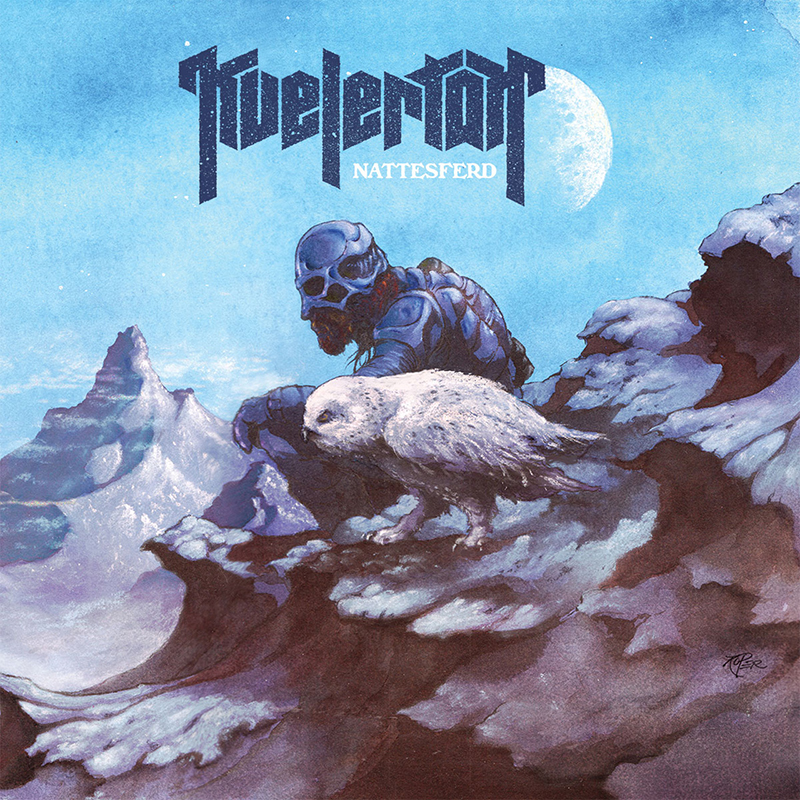 Let’s face it: Metal can get kinda boring. Granted, there have been countless innovations over the genre’s 40-something year history, but after a while, bands engage in pissing contests with each other (and themselves) to prove they are the truest, the kvltest, the brutal-ist, the pentagramy-ist. When Kvelertak released their self-titled album in 2010, it threw all pretense out the window by seamlessly melding the speed of black metal with the energy of punk and the swagger of early hard rock, making them the coolest Scandinavian party gods since Turbonegro. Meir followed in 2013 and refined the band’s formula a bit, throwing the tremolo riffs to the wayside and integrating more melody and a bit more classic rock swagger. Now with Nattesferd, the band follows in the footsteps of Mastodon and Baroness, and though they are still much more innovative than many modern metal bands, they may be on a quest with the aforementioned bands to become the Thin Lizzy-est.

The album opens up with “Dendrofil for Y’gdrasil” (oh yeah, these guys are from Norway), which is about as close as the band ventures towards “classic” Kvelertak territory, complete with blastbeats and upswept guitars. It’s a decent track, but it starts something of a trend on the album of songs with long, boring outros. The last two minutes of the song doesn’t feature vocals, which isn’t necessarily a bad thing, but the passage is a bit too boring to justify its length. “1985” was the first track released ahead of the album a few months ago, and I admit that the first time I heard it, I hated it … but now it’s probably my favorite track on the album. It features a slow, groovy riff that would fit right in on the soundtrack to the super-cheesy Heavy Metal movie from 1981—it’s hard not to imagine the band playing the song atop a giant owl and surrounded by unrealistically proportioned barbarian babes. Again, though, it closes with a long instrumental portion, at least this time there’s a pretty cool guitar solo to spice it up.

The title track is another highlight, picking up the pace with a fun, fast riff complemented by some acoustic accompaniment and some great lead guitar work—Kvelertak has three (!) guitarists, and this is one of the few tracks in their catalogue that makes great use of all of them. Erlend Hjelvik’s vocals are strong throughout the entire album, and are especially great on “Nattesferd,” steering the band toward their more aggressive tendencies with his gruff growls, though the clean chorus vocals are also part of the track’s success. “Nattesferd” is probably the best example of Kvelertak combining their classic style with their ’70s influences, recapturing the energy and excitement of their first album in a new way. “Bronsegud” is another standout, with the song’s structure  broken up by fun shouts in the midst of Hjelvik’s verses, and features some cool riffage.

The more I listen to Nattesferd, the more I like it—the band has definitely tapped into the grooviness of classic heavy metal on most of the album’s tracks, but it doesn’t quite have the punch of earlier Kvelertak albums. Some of the tracks feel a bit disjointed as Hjelvik’s harsh vocals don’t always meld with the band’s less aggressive new sound (“Svartmesse”), and a couple of the tracks are straight-up boring (“Ondskapens Galakse,” “Nekrodamus”). Fans may have a hard time adapting to the new Kvelertak sound, but underneath the shiny new veneer of classic heavy metal lies the same band. –Ricky Vigil