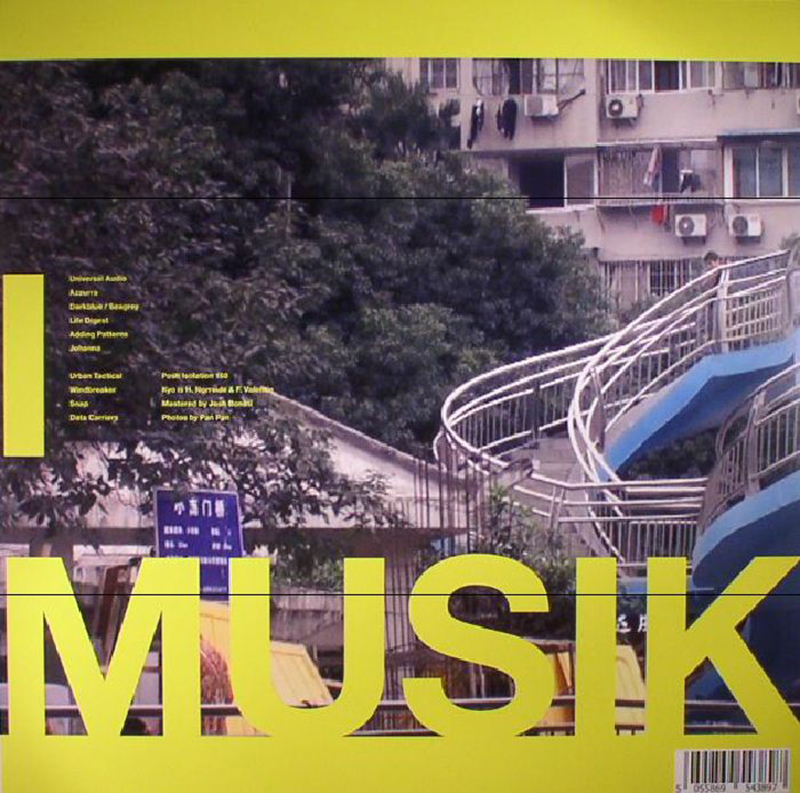 I Musik is the third album from Kyo, a Danish electronic duo consisting of Frederik Valentin and Hannes Norrvide. Following 2016’s two releases Potential Musik and Aktuel Musik, the new record continues an ongoing series of “musiks,” with each prefix dictating the theories Kyo attempt to convey. The once “potential,” serene sounds became “aktuel:” fuller, yet more dissonant and unsettling. Now, the musik has turned inwards, exploring how these ideas register on an individual level. While each of Kyo’s past releases dealt with electroacoustic music, they did so simply in a sonic way, working with how contrasting timbres can meld together. I Musik, however, seeks how meaning is reflected through different types of sound, and how stark contrasts can offer a picture of the near future.

A track like “Life Digest” shows how the duo uses a combination of real and fabricated sounds to paint their canvas. The track consists mainly of cluttered synthesizer progressions and robotic drumming, but the boldest element is the vocal sample that Kyo lay over the music. The duo chops up a recording of a girl talking about the difference between a lotion and a hand cream, explaining her opinions on their respective consistencies. The contrast between this seemingly menial issue and the cosmic, triumphant music behind it serves to critique consumerist habits and ideals. Kyo make a mockery of the idea that the things you buy can define you, bringing to light the true absurdism of this concept.

I Musik is riddled with these types of samples, where the contrast between sounds is the nexus for Kyo’s message. Opener “Universal Audio” plays to a similar feeling as “Life Digest,” featuring a computerized voice telling the listener “you are amazing,” among other reaffirming phrases. Comparable to the way social media and the internet constantly cheerlead the users’ feelings and accomplishments, this feels like an eerie double of that reality, all plastered against washes of gigantic synthesizers and lilting piano lines. When more conventionally musical samples are used, the effect can be almost more unsettling. “Adding Patterns” incorporates a sample of a scratchy violin melody, sounding like a wayward broadcast from outside Kyo’s sphere.

This move of mixing grainy, tangible elements with jittery electronic ones allows Kyo to create a world of their own. In their technology-run dystopia (pictured on the album cover as a bunch of people on winding staircases), there are small glimmers of a physical world, shown through these choice acoustic samples. A prime example is “Snap,” a cut where a gorgeous acoustic guitar is filtered through layers of static and distorted textures. In a technology-saturated world, the past can come back, but only in haunting, fleeting glimpses.

Kyo take their philosophy to greater lengths on “Urban Tactical.” Throughout the track’s 11 minutes, Kyo show off their musical strengths in varying fashions. There are breezy free improvisations, organ interludes, and uplifting synthesizer progressions. All of these remove Kyo from their digital world, placing them in a more conventional musical environment. Of course, because no one can ever really escape technology, this track is riddled with random clips of phone vibrations and dial tones. These sounds disrupt the meditative playing and smooth instrumentation, recalling how cell phones often interrupt everyday moments of peace and silence. These are grave, pessimistic claims about technology, ones that might seem to have an overly bleak idea of what’s ahead. If I Musik is any indication of the future, at least it sounds wonderful. –Connor Lockie