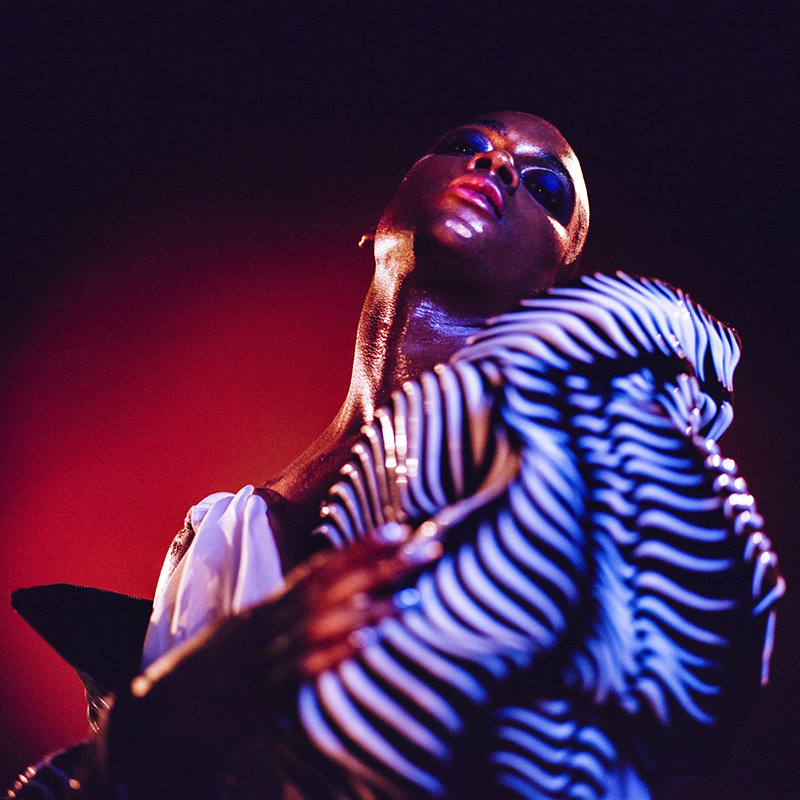 When Lotic released their breakout EPs Heterocetera and Agitations in 2015, it was one of a few releases that signaled the eruption of an internet-based subgenre of electronic music. Along with their fellow Janus Berlin members, the Quantum Natives collective and the then-fledgling NON Worldwide label, Lotic took the sounds of club music, experimental electronic and avant-garde classical and smashed them together into a bizarre amalgamation with urgent intentions. Barely three years later, all of these artists associated with what music writers awkwardly tried to term “future bass” or “ deconstructed club” have developed their own distinct styles, and Lotic is no exception. Power shows the composer and producer working fully within their strengths, and the result is an album that oozes playful experimentalism with a flooring emotional grandeur.

The first and largest change that shows up here is the use of vocals. Their voice, rare on earlier releases, features on many of the tracks, always warped and manipulated (both through electronic means and natural techniques) to fit the specific compositions. On “Bulletproof,” the thin whisper has a quality that sounds like Lotic is singing right into your ear. It’s not seductive or intimate as much as it is threatening, and the wavering falsetto that accompanies this only adds to the tension. “Nerve,” a woozy trap composition, finds Lotic at the bottom of their register, sloshing out a series of boasts and put-downs in a druggy haze for an uncharacteristically fun moment.

These short, evocative track titles help guide the narrative flow of the abstract music. Especially toward Power’s latter half, Lotic suggests a movement in pairs. “Resilience” turns into “Fragility,” “Nerve” into the vulnerable “Heart” and the epic title track eventually leads to the  quasi-peaceful conclusion, “Solace.” By leaving out any definite actors, articles or audiences, Lotic allows these tracks to be infinitely interpretable. The lines between personal turmoil, political frustrations and social ills entirely fade, turning everything into an important, all-encompassing emotional progression.

“Power,” then, is the dazzling show of force that brings the narrative towards its finish. After an opening section that reads familiar to Lotic’s typical style of electronic composition, the music turns loose for a stupidly simple turn toward aggression. As odd as it might sound on a Lotic track, the focal point is a blistering, heavy-metal-style drum solo. Ironic appropriation of these sounds would be one thing, but Lotic uses it as a straight-faced means of invigorating expression against the blasts of noise.

Moments like these, where the interlocking elements turn odd mixes into fantastic wholes, showcase the underappreciated nature of Lotic’s intricate arranging skills. The percussion alone on the album is awe-inspiring. The muted tapping that opens “Resilience” gives a restrained mood, but the music erupts halfway through into a bombastic climax. The opening rhythm on “Heart” is nearly impossible to pin down, as the shifting accents and frequent silences feel completely unquantized. Once the synthesizers enter, though, the entire feeling of the track shifts to a propulsive dance groove. These dense, rhythmic exercises are crucial to grounding Lotic’s music in a palpable physicality.

The melodic and harmonic writing, though, is the true marker of Lotic’s increased powers. Especially toward the ends of the tracks, the contrasting melodies and gestures build into momentous collages. The opener, “Love and Light,” forgoes many of the percussive elements that grace later tracks in favor of a light synthesizer counterpoint. Later, “Fragility” offers the single most profound moment of music on the record. All the clutter and chaos falls away, leaving only a plaintive melody and a deep bass hum. Of course, this bliss is eventually shattered by a glitched-out drum pattern that violently crashes into the mix. This contrast sums up much of Power: Lotic makes incredibly beautiful music, but it’s buried in layers of ugliness. Ultimately beauty wins out, but not without large forays into darkness. –Connor Lockie