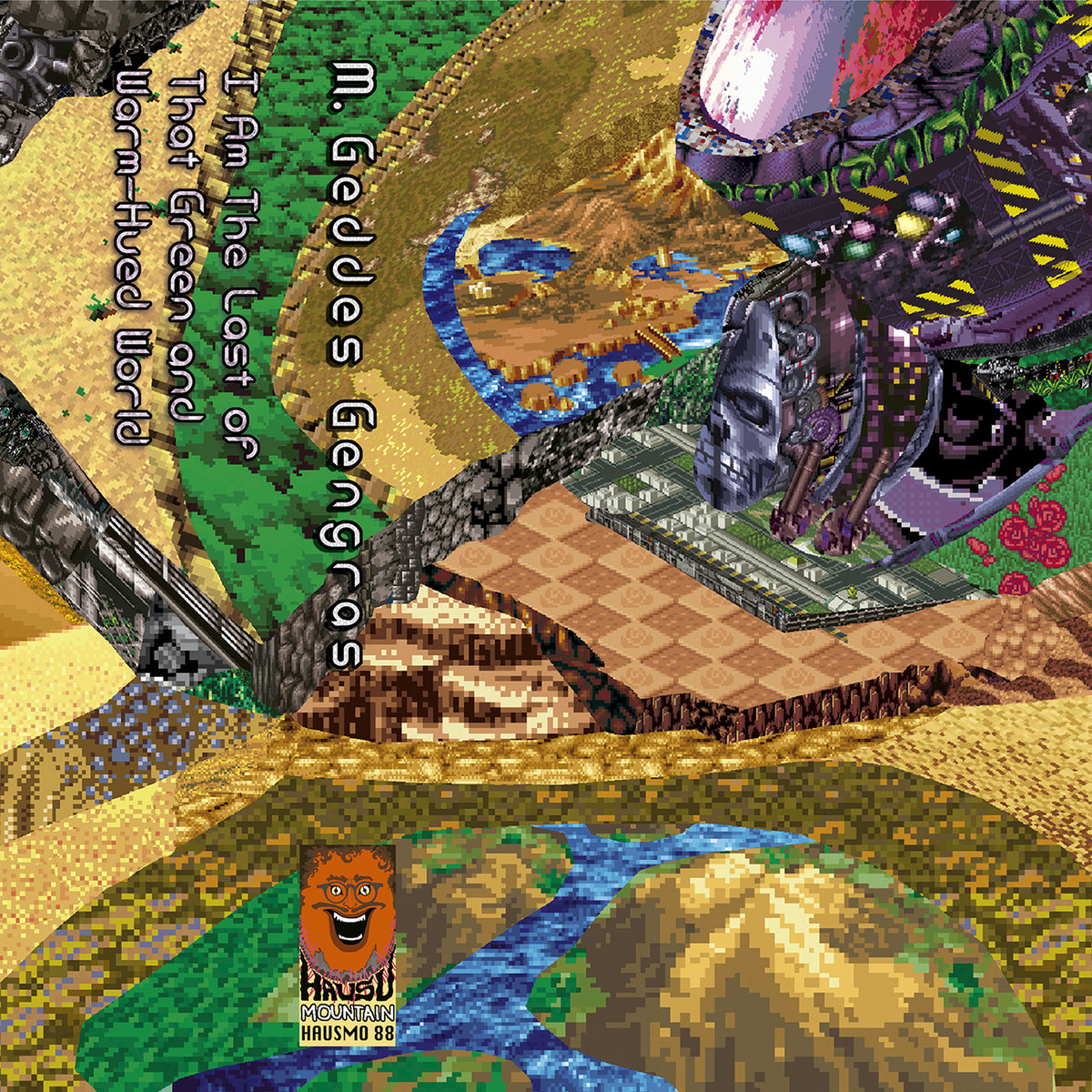 M. Geddes Gengras | I Am The Last of That Green and Warm-Hued World | Hausu Mountain

Review: M. Geddes Gengras – I Am The Last of That Green and Warm-Hued World

M. Geddes Gengras
I Am The Last of That Green and Warm-Hued World

So far, 2019 has seen Hausu Mountain exploring the jittery side of their warped musical territory. Releases by Tiger Village, Nonlocal Forecast and BANG! BROS. were agitated, quick-paced and colorful. While each is fantastic in its own right, there’s another, dreamier side of the label that’s escaped most of their year. Almost as if to overcompensate, the label’s latest is a sprawling ambient album from one of the decade’s most quietly revered artists in this style, M. Geddes Gengras. The same definitive Hausu characteristics are still here—kitschy artwork, a winking lack of context, a giddy reverence for antiquated electronics—but everything is filtered through evocative, transportive drones.

The environmental title, the sound palette drawn from exotica and the immersive listening experience brought on by its epic length suggest that I Am The Last of That Green and Warm-Hued World should function as spacious, room-filling music. Working against this pleasing naturalness is the finality referenced in the album title. Gengras is hyper-aware of his position as an electronic artist in the digital age, and his approach to ambient and new age music on I Am The Last…showcases this. For all its flirtations with canned nature sounds (birds, water, insects), the synth-driven music exists perpendicularly with these touchpoints. The sound worlds do meet, but only briefly and always in an estranged manner.

Outside of these grander philosophical conceits, each track is defined by its subtle convergence around a set of ideas rather than a clear presentation of each. If every moment on I Am The Last…isn’t completely enrapturing, the totality of the nearly ninety-minute work offers a distinct electronic portrait of the floating through a buffering rainforest. The overall feel of the album threatens a Satie/Eno-inspired state of passivity without ever truly arriving there. Repetition, phasing and breezy synth patches all play a heavy role in this album, but there’s a sense of anxious disorder at the heart of each moment. Especially in the middle three tracks, a sense of unease wins out over bliss. “Cellar / Oracle” is the most turbulent stretch on the whole album, utilizing dub-style echoes to build a creeping base onto which Gengras places a high-pitched, beeping melody line.

The rhythmic focus continues on “Passage Under the Mountains,” which incorporates quasi-techno drum patterns into its droning fold. Both one of the most active tracks and the most meditative, “Passage” succeeds in its focus on steady, slowly shifting patterns. “The Drawing” unleashes the music back into spacious territory and ends the album on its most optimistic, sentimental note. The key to balancing this multi-faceted approach to ambient music comes in Gengras’ careful design of his textures. Each block of sound—both jarring and inobtrusive—is a complete statement in itself. A transition like the shift from airy, tropical sounds at the end of “Zoltan” to the heavy and dissonant synthesizer pads on “The Pump at the Way Station” highlights the unique qualities of each by means of stark contrast.

That Gengras refuses to participate in the perfect union of enjoyable and ignorable is to his album’s benefit. The music’s compositional complexity allows the possible musical and ideological interpretations to spread a wide gamut. I Am The Last of That Green and Warm-Hued World is equal parts smoker’s ambience, spiritual environmentalism and finnicky electronic experimentation. The fact that the album is far from scattered is both a testament to Gengras’ nuanced approach and another example of the honest, assured personalities found in the experimental works of underground tape labels. –Connor Lockie