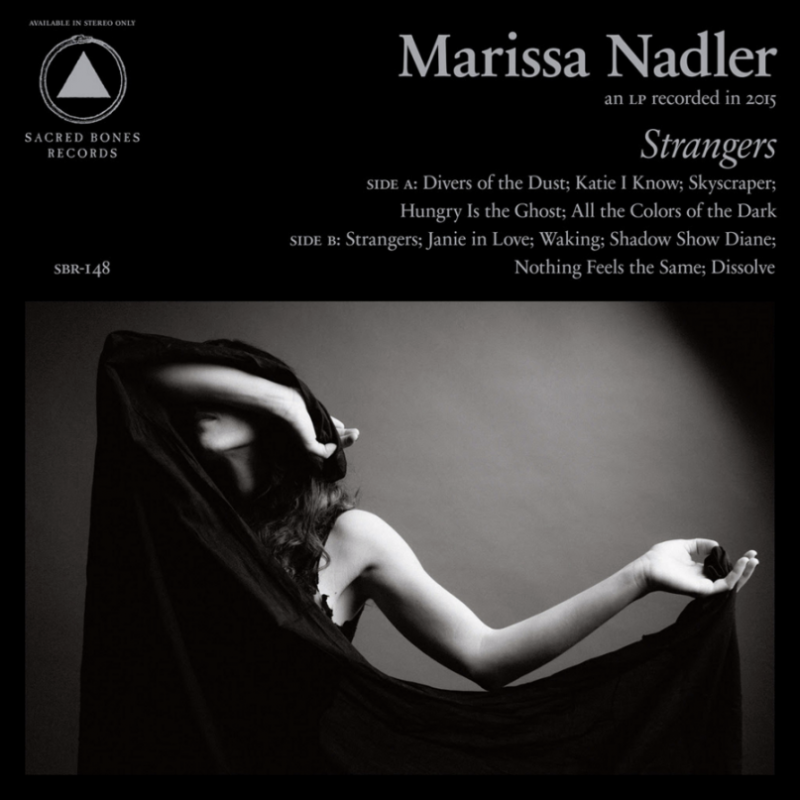 “This is not your world anymore,” she sings.

Marissa Nadler, the galaxy-gazer of American somni-folk, is not of this world. She is an extraterrestrial unloved, a wanderer nonplussed, an inhabitant of a realm that aligns dissonance with wonderment. She is ethereal, moody and dark like early morning, and with Strangers, Nadler’s seventh full-length album, our indelicate eyes are able to adjust to her clear, clairvoyant lens.

In cinematic constellations and crescendos, Strangers sets an atmospheric scene of apocalypse. The tracks, obscured by gulls of reverb, are echoes of the disenfranchised remains of a scorched and jaded earth, affording Nadler the opportunity to sing beyond herself. Assuming the identities of said remains—or the “strangers”—the singer-songwriter taps into the undefinable with her harrowing music. She eerily examines the loss of recognition, both of the physical and metaphysical, on the morgue-organ death march, “Nothing Feels The Same,” and the haunting pain of remembering on “Katie I Know.” The rolling single “Janie In Love” exposes the peculiar attraction to, and inevitable detriment of, destructive forces. The material draws her to the catastrophic, her perceived influences varying in tragedy: Elliott Smith–like chord progressions on “Shadow Show Diane,” whits of Baz Luhrmann’s Romeo + Juliet on “Waking” and “Janie,” shadows of True Detective on the titular “Strangers.”

While her maudlin contemporaries deliver us to impossibly lucid locations—Kate Bush in a wily, windy moor, Lana Del Rey in a domestic dispute—Nadler’s destinations are interpretations and constructs of imagination: the dark side of the moon, a nondescript plateau, a halite formation in the shallows of the Salton Sea. She is difficult to navigate: Her tenor is a sonic cliffhanger, gravitating toward the minor key as if to preserve her mystery. If left unanchored, as on the acoustic closing number “Dissolve,” the artist’s voice is prone to drift away. However, when leveraged by layered orchestration—crashing percussion, surf guitar, three-part harmonies, sub-synths—Nadler’s melodic amble and streaming consciousness keep their course.

The full-bodied production by Randall Dunn (Sunn O))), Black Mountain) might misrepresent Nadler for a gloomier Del Rey, but her ethos is separate from that of the common pop star or studio player. In 2010, after being dropped by her label, Nadler launched a fan-fueled Kickstarter campaign that successfully funded her self-titled LP a year later. She has collaborated with Angel Olsen and lent her voice to Wrekmeister Harmonies, and she has covered The Smiths‘ “Pitseleh” and Leonard Cohen’s “Famous Blue Raincoat.” She released a rendition of Danzig’s “Blood And Tears” to a creepy Youtube claymation. Nadler’s ghost, at world’s end, will most certainly roam with the spirits she has touched, confronted and encountered.

Gothically and cataclysmically beautiful, Strangers stirs the unknown in us all: the part of us that is willing to love dangerously, embrace a visitor and say things we have only said in private. Strangers awakens the part of us that might survive doomsday. In times of crises or foreignness, we tend to band together and gather remnants of normalcy to simulate its semblance. Nadler, with her musical musings, does the very same. “This is not your world anymore,” she sings, and she is right: It is ours. –Cassidy McCraney