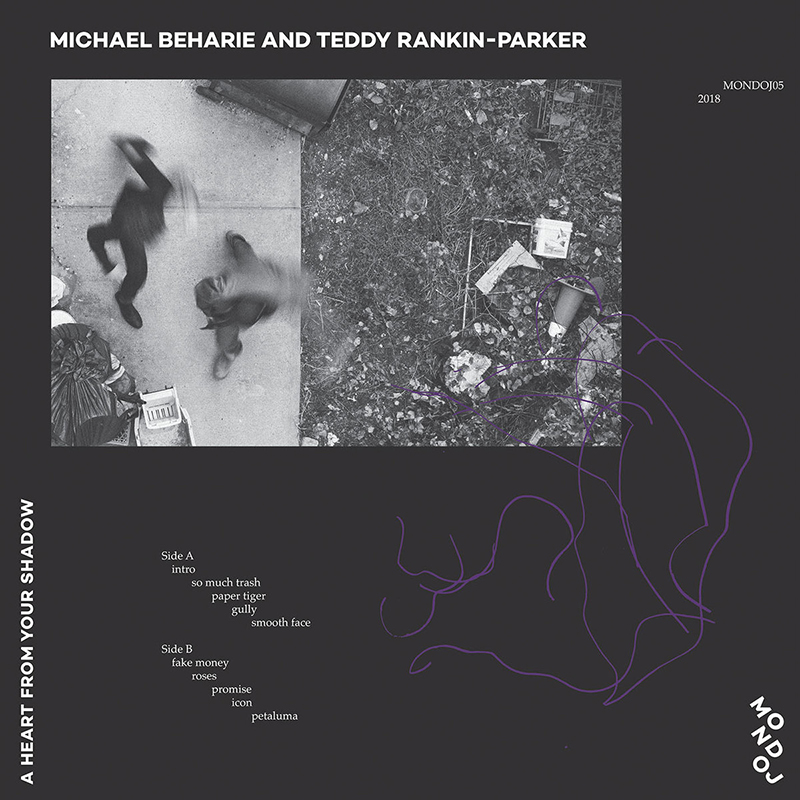 Review: Michael Beharie and Teddy Rankin-Parker – A Heart From Your Shadow

Michael Beharie and Teddy Rankin-Parker
A Heart From Your Shadow

If you only listened to the opening minute or so of A Heart From Your Shadow, you’d be content to label it as a sanguine, even heavenly contemporary classical record. The angelic vocals and whispered, high-register cello are unbelievably gorgeous, while the restless harmonic progression would make any music-theory nerd grin. A bit past the midpoint, however, the tone shifts completely. Rankin-Parker’s cello lines fly to the opposite end of his register, aggressively sawing against his low strings. This grit is compounded by wailing electronics and police sirens, laying waste to any hope that this record is meant to pacify you.

The following half-hour of music hits nearly every mark in between these two poles. Beharie and Rankin-Parker do a masterful job of respecting each style they take on while still asserting their individual styles. On “So Much Trash,” the focus is clearly on the steady hand percussion rhythms, but the ghostly chimes and airy synthesizers that adorn the track add an ethereal hum to the otherwise rigid drum patterns.

The record was mixed by Jim O’Rourke, and his always exemplary work in this field is matched here. Electro-acoustic music often comes across as a battle between these two contrasting domains, to the point where they ultimately evade connection. Both as a result of the compositions themselves and O’Rourke’s delicate touch, A Heart From Your Shadow feels like a perfect union. These sounds aren’t electronic manipulations of acoustic sources, they’re fully immersive collaborations between the two.

Outside of knowing that the cello lines are almost definitely Rankin-Parker’s, there’s no telling who’s really doing what. Even that distinction is complicated in certain moments where the mix homogenizes past the point of definition. On “Roses,” sounds are affected to their breaking point. The resulting track is a menagerie of synthesizers, treated cello lines and MIDI voices, every part somehow merging together to form this towering centerpiece.

The way that “Roses” naturally comes together out of disparate parts represents the restful, effortless nature that floats over A Heart From Your Shadow. While the music is often alien and abrasive, it never feels like the duo are pushing listeners away. Throughout, there’s a trace of communicative empathy. Even the late album cut “Icon,” a full-throttle noise composition full of screeching cello lines and crushing static, feels more like an invitation for catharsis than it does a bludgeoning assault on the senses.

Regardless of how talented, practiced or educated either musician may be, it never feels like they’re trying to prove anything. There are no extreme shows of technique, no masturbatory sequences of constantly shifting time signatures and no sense that only the most informed elite will get this music. In this sense, Beharie and Rankin-Parker are two of many in a new breed of experimental musicians. Much of 20th century art music existed as music for music’s sake, but now there’s a greater sense of needing to address the global realities many were content to ignore. If only vaguely, then, A Heart From Your Shadow presents political implications through its empowering music. After the album ends, the sentiment isn’t one of solitary contemplation or study. Beharie and Rankin-Parker’s urgent music insists that listeners move beyond the hermetic associations of experimental music. This is a egalitarian collaboration by two musicians who spend more time enhancing other’s music than they do making their own. Death to the artist as auteur: This is music for building and fostering intimate community connections. –Connor Lockie