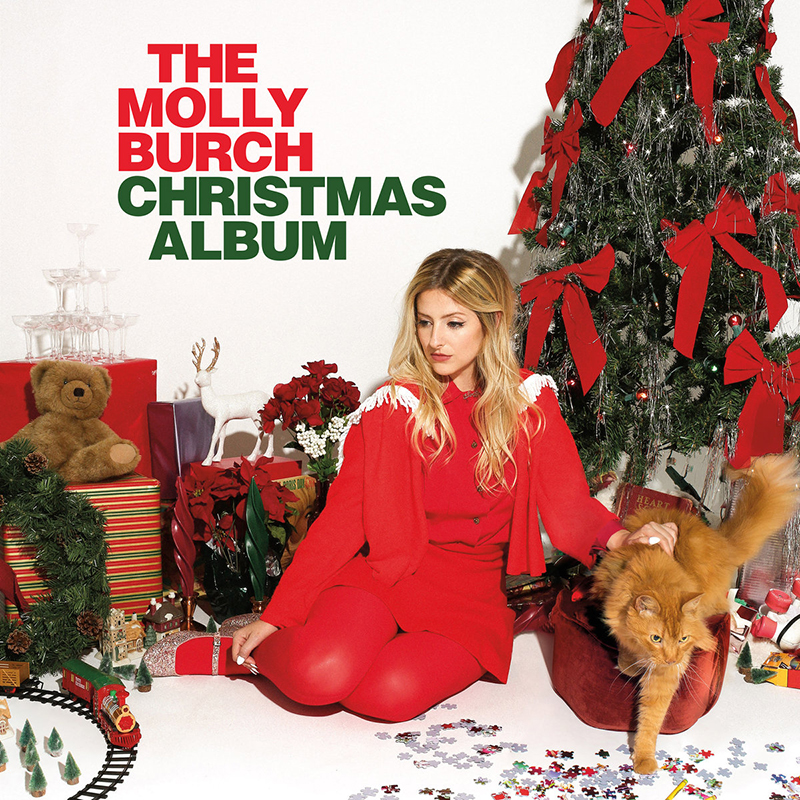 As the end of the year approaches, my dread heightens at the thought of being bombarded by the same relentless holiday tunes. Well, tis the season. To my surprise, however, a new and refreshing Christmas record has melted away my holiday cynicism.

A month before the merry festivities begin, Molly Burch gifts us with The Molly Burch Christmas Album to commence the holiday spirit countdown. Burch gives these classic hits a modern relevance while still holding true to the primary emotions that each song conveys. She molds her Austin-inspired sounds into a mixture of hidden gem covers and Christmas classics alike. With the addition of two original songs, this album is a seamless recipe for the holiday blues.

The Molly Burch Christmas Album begins with a rendition of Ella Fitzgerald’s “The Secret of Christmas,” where the awe-inspiring vibrations of Burch’s vocals are accompanied with an echoing harp. This type of soulfulness continues into the following track with a steel-guitar cover of Dolly Parton’s “Hard Candy Christmas.” Lyrically, the original has a hopeful outlook on being heartbroken during Christmas time. Burch portrays this emotion, but even so, she also adds another layer of anguish. Burch also contributes a considerably festive coziness to The Mamas and The Papas’ “Snowqueen of Texas” with an alternative country version that would make Mama Cass proud.

Burch imbues a contemporary relatability into the more familiar holiday classics. This is shown in her execution of Wham!’s “Last Christmas” by using a conversation throughout the track between John Early and Kate Berlant about trying to keep a cheery attitude during a friend’s holiday party. The dialogue sways into the inevitable satire value that the original song encompasses, with moments like Early and Berlant breaking the fourth wall to start scream-singing, “Christmas!” between verses.

In the track “The Coldest Night of the Year,” an additional vocal line is introduced by Jesse Woods. This duet has genuine sentimentality and provides a less creepy alternate to the popular “Baby, It’s Cold Outside.” Sleigh bells chime quietly in this Vashti Bunyan rendition without attaching any unnecessary gaudiness.

However, “I’ll Be Home for Christmas” was the first song to come to mind that I hoped would be on this album because the melody + Burch’s dreamlike voice = perfection—and it does not disappoint. This interpretation alters the original to a minimal jazz beat with a wistful guitar melody that fills you up with the nostalgic warmth the holidays tend to bring (sometimes).

Burch adds her name to the roster of artists who hit the milestone of creating new and unique festive hits. “It’s the holiday season / It’s the season of believing / And I’m dreaming for this reason of you,” Burch sings on “Holiday Dreaming,” a track that could blend into her previously established discography. The same could be said with “New Year Love,” a track that, sonically, could be played year-round. But the jolly season is upon us and it sends the classic holiday vibe straight into my cold, pessimistic heart.

Even as the scrooge I am, The Molly Burch Christmas Album is worth returning to every holiday season. It educates listeners on some of the best written and potentially forgotten holiday hits, all performed by some of the most beloved artists. Molly Burch brings her golden-age charm to every song while giving each a new breath of life. It’s the ideal record to ease into the transition of winter by offering just enough Christmas spirit without disturbing all the fellow grinches out there. –Kenz Waldon