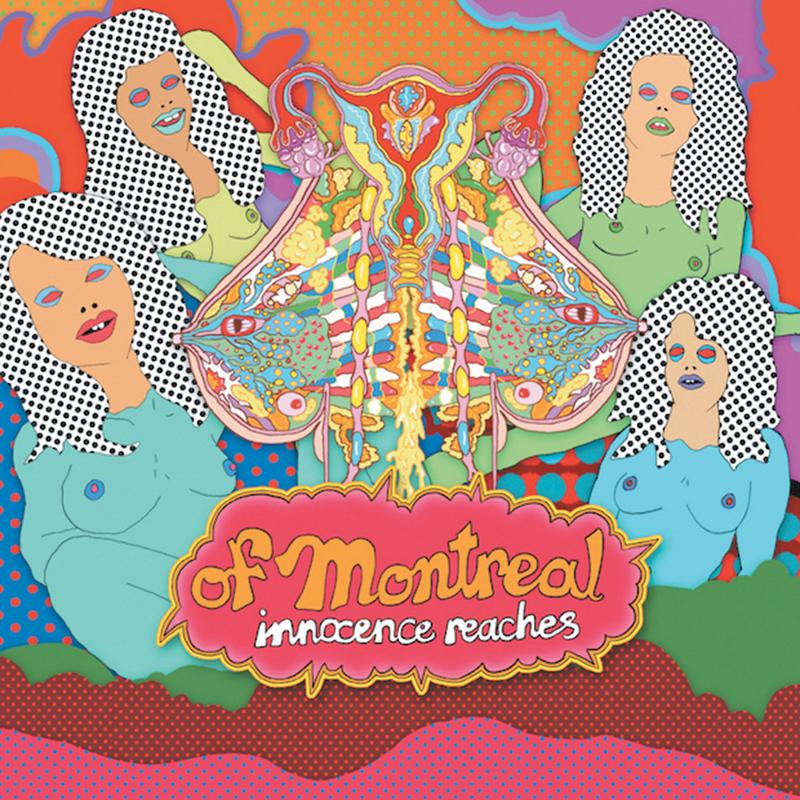 of Montreal’s enigmatic frontman and multi-instrumentalist, Kevin Barnes, has been a musical anachronism since the band’s inception in 1996. The band’s 20-year discography has spanned topics including French literature, avant-garde cinema, Greek mythology and glam rock; yet, despite continual lineup changes, it has unfailingly produced overwhelmingly solid albums. Their most recent release, Innocence Reaches, is no different.

Barnes has been a longtime fan of ’60s pop music—a quality as definitive to the band’s sound as are their musical psych trajectories. Innocence Reaches forges a bridge between the band’s love of the aforementioned genre and a more modern, heightened electronic approach. The opening track on Innocence Reaches, “Let’s Relate,” features the nostalgic, personalized lyrics that made Barnes a central figure of the indie-rock scene in the ’90s yet incorporates an array of synths, drum machines and thinly layered vocals that build into a musical epiphany by the time the track hits its midpoint.

Despite Barnes’ dedication to a previous musical time period, his influences for Innocence Reaches are decidedly more modern—including electro-pop acts such as Jack Ü, Chairlift and Arca. The second track on the album, “It’s Different for Girls,” doesn’t shy away from these influences: On the contrary, it embraces it fully. Barnes’ staccato vocals bounce delicately through the feminist-charged track, singing, “It’s different for girls / From when they are children / They’re depersonalized / Aggressively objectified” and “They’re not expected to fight / They’re expected to sit and take some lesser man’s shit.” It’s an electronic anthem with sliding harmonies, scattered keyboard loops and a full-on dance anthem—and easily one of the most powerful tracks on the album.

The fourth track on the album, “My Fair Lady,” is perhaps the most brilliantly constructed song on the album. Barnes sighs nonchalantly, “My lady is back at home / Cutting herself and sending me photographs” over a bed of lounge bass harmonies that hearken back to the band’s 2007 release, Hissing Fauna, Are You the Destroyer? The song explores fuller-sounding territory as it hits the halfway point and Barnes’ vocals drift off into a ’70s-inspired psych daydream featuring saxophone electronics that swoon irreligiously beneath his fuck-it vocals. It’s just another day for Barnes—wrist-cutting and photographs—as the song clearly dictates.

The most spectacular song on the entire album, “Chaos Arpeggiating,” weighs in as the ninth track of the album, opening with brief, old-country guitar melodies that quickly devolve into the darker side of pop-psych. Distorted guitar tones, lowered vocal timbres and a grungy, druggy drumming style produce an aesthetically challenging sound that could have been a B-sides release to The Beatles’ Rubber Soul. Barnes’ lackadaisical vocals spew over the chaotic, swirling guitar harmonies: “I was truly touched that you still cared enough to throw psychotic fits.” Barnes’ sarcasm hasn’t been lost over the years, and neither has his satirical tone of voice.

Innocence Reaches rests effortlessly within of Montreal’s impressive discography—a feat few bands can lay claim to. As the band’s 14th full-length release, Innocence Reaches manages to strategically incorporate an entire discography of the band’s sounds—psych, rock, progressive, electronic and glam rock—while straddling newer, electro-pop territory. It’s an accomplishment that only of Montreal could pull off—and they do it impeccably. (Urban Lounge, 10.18) –Kristin Porter