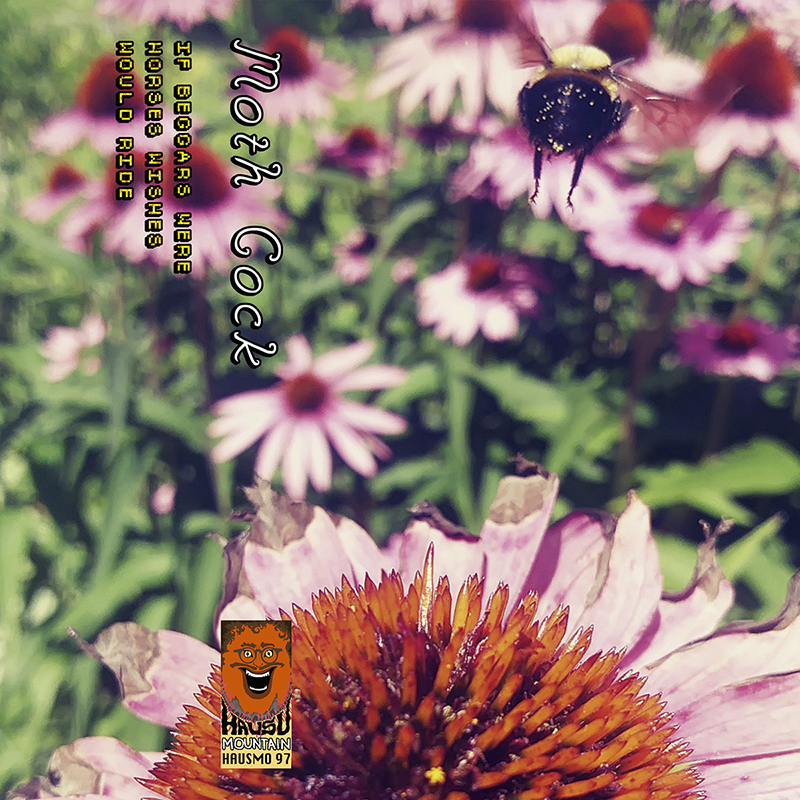 Review: Moth Cock – If Beggars Were Horses Wishes Would Ride

Moth Cock
If Beggars Were Horses Wishes Would Ride

The duo of Moth Cock thrive in a world where omnivorous sound collage, free improvisation and feel-good (if slightly off-kilter) funk beats are inexplicably intertwined. Their previous album for Hausu Mountain, 0–100 at the Speed of the Present, saw these styles collide into a fascinating onslaught of music, a nearly hour-long ride through a sea of chaotic and colorful freakouts. Prior to the release of their new album, nuance and cohesion would have seemed like flat-out inaccurate descriptors of the band’s work. However, If Beggars Were Horses Wishes Would Ride makes a case for Doug Gent and Pat Modugno’s increased comfortability with and control of their far-reaching, sample-based improv. Even if the logic here is—at best—internal and self-defined, Moth Cock do appear to be placing more focus on structure and unity.

Despite this slightly more refined approach, the duo’s characteristic playfulness still remains. If anything, the slight touch-up they’ve given their music allows its truly special oddity to shine. After a brief and comical intro track, “If Watches Were Turnips” introduces the album’s musical identity with one of Moth Cock’s most confounding collages. The stumbling percussion loop and jackhammer-like vocal samples feel familiar enough, but the track also prominently features an electronically manipulated harp line. This instrument’s smooth, calming nature initially feels at-odds with the staccato punches of the rhythm section, but continued exposure to this strange mix of sounds eventually reveals a tenderness underneath the track’s alienating blasts.

The sense of rural/pastoral bliss is again hinted at on “If Pots and Pans Were Tinker Hands,” a more drone-based track with the wonderful addition of a breathy, reedy harmonica. Especially toward the cut’s conclusion, where the pitch and speed of the recording gradually approach low and slow, the harmonica’s longtime association with lonely, front porch playing speaks out. “I’d Wear One By My Side” contrasts these elements of solemnity by featuring an almost shuffling groove, one of the most straight-ahead beats on the whole album. Each new sound addition—saxophones, synthesizers, MIDI bass and clarinets all make an appearance—brings the track up to a higher plane of alien-cowboy-jam-band-land. Once the track introduces its punchy, catchy trumpet lead and pummeling kick drum pattern, the music is fit for a full-on dance party.

Where “I’d Wear One” undergoes one grand ascent toward a full-blown explosion, “If Beggars Were Horses” features a clearly delineated two-part structure. The first half of the track rides along a heavy four-on-the-floor kick pattern with pitch-shifted saxophone skronks before a tinnitus-inducing burst of feedback introduces the track’s indispensable beat switch. The second half slowly unravels into a messy, droning mix of innumerable sounds. Given If Beggars’ generally more rhythmic focus, this extended bit of non-percussive airiness is a welcome reprieve, especially as it arrives immediately before Moth Cock’s blatty and splashy noise jamming on the closer, “If Bayonets Were Turnips.”

If Beggars Were Horses Wishes Would Ride is a significant step forward on the path toward defining Moth Cock’s inherently indefinable art. 0–100 felt like the duo were discovering the musical and emotional effects of their work right alongside the listener, reveling in the presence of new sounds and new ways of music making. Here, they’re starting to pick up the rubble of their deconstructed approach, slowly building small huts and shacks out of these shattered pieces. Here’s to the village of Moth Cock, a techno-agrarian safe haven for the outer limits of the world’s music. –Connor Lockie