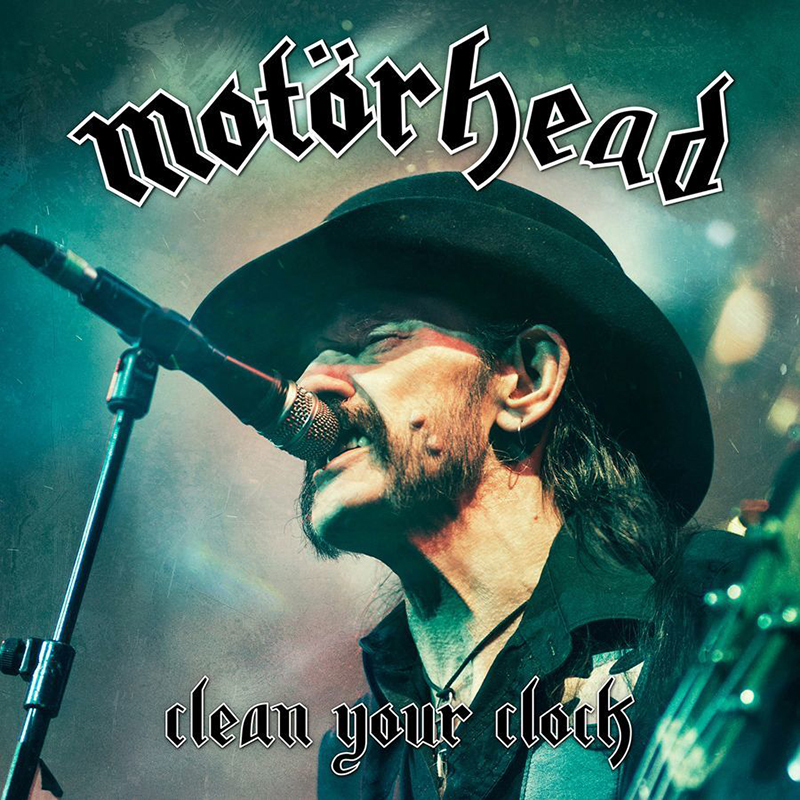 I’ll never forget getting what I think was my second tattoo and hanging out in the shop for the first time. For whatever reason nobody had any music to put on the stereo, and I was asked if I wanted to put my ipod on. I paused in terror. These guys are tattoo artists, the coolest people on earth, I thought. What if I chose something uncool? “Uh, everyone likes Motörhead, right?” I said timidly. And for the next couple of hours, we rocked out to Lemmy’s growl as the rest of the band charged along, and I sort of passed as cool. I honestly don’t think there’s another band that could have accomplished that amazing feat.

Clean Your Clock is a live recording from two November 2015 shows in Munich, which are now the last professionally recorded live shows by Motörhead. Now, I know that many were disappointed by Motörhead’s last show in Salt Lake, but given how soon after Lemmy passed away, I have to assume that we all forgave the four-song set and will probably cherish those four songs we got. That being said, on some fateful night in Munich, they gave a much more spirited performance, and it really solidified that this was a live working band for 40-plus years. It’s funny— The Beatles get put onto this pedestal, but they barely made it over a decade, and for a large portion of that time, they didn’t play live anywhere. For my tastes, I want a band that lives for the live show, that release an album with the thought that these songs are going to pay their bills for the next year or so and get sweaty onstage with them. (Yes, what I’m saying here is that I prefer Motörhead to the fucking Beatles!)

Now, there are many, many live records, bootlegs, DVDs and whatever else is out there for fans, and the definitive live record will always be No Sleep ‘Till Hammersmith, but I highly recommend Clean Your Clock for a few reasons. One, it stands as a testament to the band for sounding this amazing after so long— Lemmy still had it even this close to the end. Two, its an incredibly great-sounding live record. Most of the tracks sound studio level, and the band is still so top-notch. Listen to Phil Campbell’s two-minute “Guitar Solo” track. Mikkey Dee’s thunderous drumming is so colossal, it’s apparent why groups like Thin Lizzy and the Scorpions want to use him now. And three, we get recent songs that aren’t readily available live, like “Lost Women Blues.”

To conceive of a world where Motörhead isn’t out there on a stage every night isn’t pleasant, but we as rock n’ roll fans will forever have this legend of a band that could walk easily between punk and metal, could drink more than anyone, do more drugs than anyone, hold the esteem of so many different people in the music world and even kill their neighbor’s lawn if they moved in next door. –James Orme