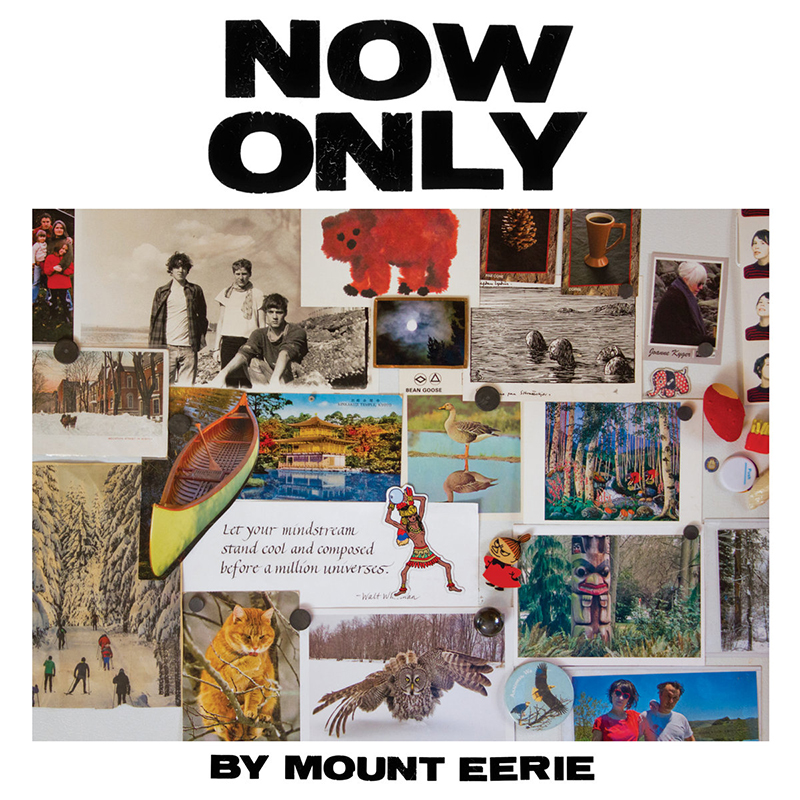 In 2017, Phil Elverum, the artist behind Mount Eerie (formerly The Microphones), released A Crow Looked at Me, undoubtedly one of the bravest yet most tragic albums pressed to vinyl as Elverum sought to come to terms with the death of his partner, artist and musician Geneviève Castrée, who sadly passed away in 2016 after a battle with pancreatic cancer.

Impermanence and the fleetingness of life have been recurring themes in Elverum’s work both as The Microphones and Mount Eerie, and with Now Only he continues this. He keeps the narrative of A Crow Looked at Me alive, but the tone has shifted from devastation to his delicate recounting of his relationship with Castrée and life since. The pain is as real as it was on A Crow, but the days have continued to pass and Elverum shares these moments with us over six pensive tracks.

“I sing to you, I sing to you, Geneviève,” laments Elverum in the opening seconds of “Tintin in Tibet,” the album’s first track, which takes its title from the children’s book by Hergé. Over fingerpicked guitars he tells of how they read the book aloud to one another in French while waiting for a boat, how they sunk into one another, “in love, totally insane.”

Elverum’s penchant for darkness re-emerges on the second track and the album’s single, “Distortion,” which begins with a crushing, distorted guitar riff that is reminiscent of an earlier Mount Eerie album, Wind’s Poem. “I know that you are gone and I’m carrying some version of you around,” Elverum sings. More acoustic guitars enter as he dolefully tells of his youth and first experiences with mortality, another recurring theme throughout his work. This time, however, it is as stark and real as ever. “I do remember when I was a kid and realized that life ends and is just over,” he continues, drawing a line from his youth to the world he now knows, brooding guitars surging in and out as the 11-minute song moves along.

The third and title track picks up where the second left off, with Elverum remembering a hospital waiting room, scanning the faces of the other people there before he shifts into a sing-song lamentation: “But people get cancer die … people just living their lives get erased for no reason,” going on to tell how the rest of us search for ways to “feel lucky to still be alive, to sleep through the night.”

“Earth,” the fourth track, begins as if it’s going to be another upbeat tune in tone before it quickly turns dour, Elverum presenting the moments of having to live while others do not as realistically as must be the sway of emotions in that situation.

Now Only ends with “Crow, Pt.2,” which more than any track on the album is a continuation of the healing process Elverum has described to us. “The baby that you knew is now a kid and when she looks at me with your eyes / The shape of almonds / I am stirred inside and re-emerge,” he sings, gently commemorating his late partner, gravely observing new patterns of life over nylon strings, one of Elverum’s most touching and humbling songs to date.

This is what the aftermath of what real death sounds like after having passed through Elverum’s home, a gentle and touching remembrance to the life and creativity of that which left him. The music of Mount Eerie has always been highly personal and intrinsic, with Now Only acting as a cathartic and therapeutic follower to A Crow Looked at Me. –Ryan Sanford