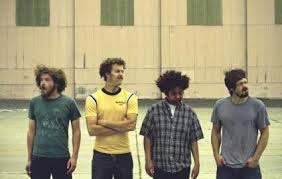 Mwahaha
Self-Titled
Plug Research
Street: 03.26
Mwahaha = The Faint + TV on the Radio
Mwahaha’s self-titled debut is a full-on electro-psych, pretentious jam session that left me feeling adrift and unsatisfied. The album starts out on a pretty solid foundation, with complex layers of progressive synth and vocal harmonies, but seems to get lost on its own chaotic trip. “Swimmer,” the opening track, is driven by a heavy, deep bass line and drum beat frosted with Ross Peacock’s subdued, falsetto vocals. Though the track lacks any noticeable climax, it offers a sweet, electro-pop outro that juxtaposes nicely with the heavy synth harmonics that open the track. From there, the album gradually grows more and more ambient and hypnotic, maintaining the subdued and melancholic harmonies reminiscent of She Wants Revenge in the song “Sleep Deep” before going into a near-11-minute, fuzzed-out space journey that tries desperately to evoke emotions that I just couldn’t muster. –Darcy Wouters-Russell