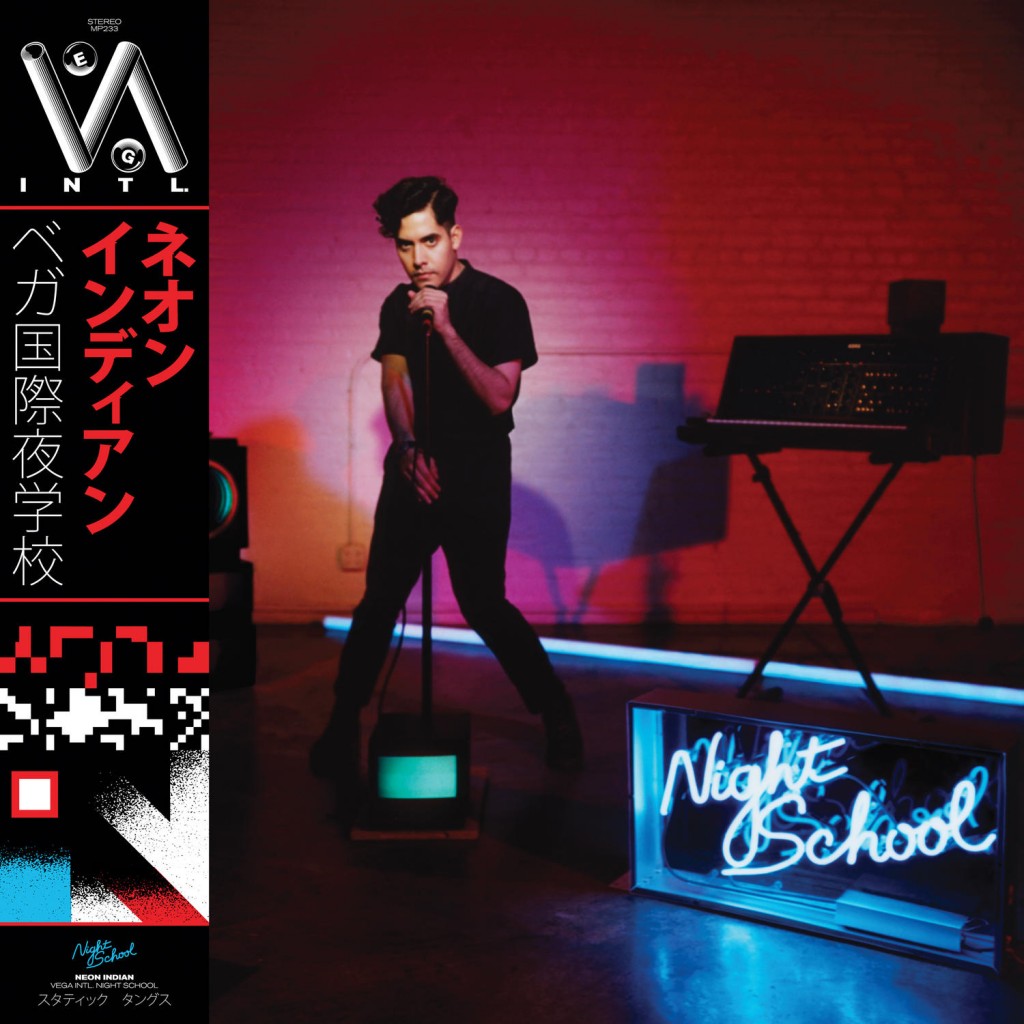 There’s a relieving sense of progression balanced by familiarity on VEGA Intl. Night School, Alan Palomo’s third record as Neon Indian. Few artists can take years of genre-labeling and expectations and turn it into a substantial album that maintains their original experimental side while still managing to sound completely new.

From the virtual-reality ambient noise that soon turns to blissful Balearic sounds on opener “Hit Parade,” you get the idea that Neon Indian is a host with open arms ready to take you on a wickedly fun ride, one that seems to have Palomo finding himself as a musician. Palomo faced a heavy challenge in the years between this album and his last, due to a stolen laptop that contained several year’s worth of demos for VEGA Intl. Night School Despite this hurdle, Palomo has admitted in recent interviews that losing his laptop was the best thing that could’ve happened for this record, and he seems to have had an (unsurprisingly) psychedelic yet joyful experience recording it. A portion of the album was recorded during time spent on a cruise ship, and it’s easy to see how a floating-club in search of an island paradise (while simultaneously imitating that paradise) could produce the glamorously funky grooves and near game show sensation (see “C’est La Vie”) that exists within VEGA Intl. Night School.

“Baby’s Eyes” begins with spacey, threatening keys that sound like Drake or Future could step in any minute, but then a squelchy bass line appears welcoming Palomo instead. The distorted guitars that appear on the end of this track make it sound like a re-imagined song from Psychic Chasms (Palomo’s debut) but souped-up with intelligible verses and a catchy hook. The first singles to appear from VEGA Intl. Night School, “Annie” and “Slumlord,” are accessible dance numbers that can spark the hearts of late-night weirdoes just as easily as they can the hearts of weekend warriors who are less familiar with the “scene.” This album is the closest to pop that Palomo has ever come, and for all of its accessibility, it still remains an unusual fusion of sampling and synthesizers.

Palomo’s two previous albums have graced dazzling colors, one bold and the other subtle, but this Neon Indian release bears Palomo himself looking you directly in the eyes. From that hint of transparency to his most assertive falsetto to date—which is reminiscent of early Prince particularly on “News From The Sun”—the feeling is clear that Palomo is accepting his style of music without any reservation and sharing it with us in the most colorful way possible. He’s long been hailed as a father of the chill-wave genre and that haze is occasionally noticeable on this album, but this is his brightest and most intentional effort to date. The final words on “News From The Sun” make that assertion clear with an assertion of its own: “We’re all just waiting for something ‘til love touches you like a hand in the dark.” Naturally, serendipity is a major theme here, but it’s far from being the only pervading one. After all, one doesn’t find a firm grip on optimism without first recognizing the potential for negativity in a situation.

VEGA Intl. Night School is a place where late-night parties, socializing and finding yourself in decadent places (“Smut”) can teach you how to survive not just the nightlife but life in general. “With a head full of pesticide / Just trying to survive the night / Everything’s going to be alright / Because we’ve seen it all before,” Palomo croons over the disco-slime of “Street Level.” In the last four years, Palomo has been around the block, and life has taught him that you might as well dance through the good and bad times. You’ve got the same chances for failure or success in the morning, which is all the more reason to take a chance on something familiar despite the fact that everything around you seems to be changing. So when Palomo presents us with an album that acknowledges his past while boldly approaching the future, we can dance in any situation without reservations and hope for the best to come when the sun rises.